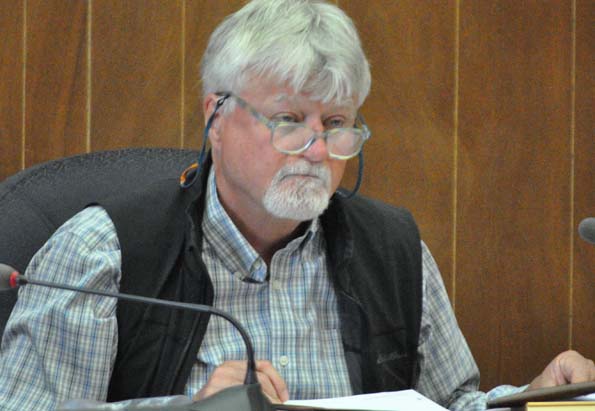 Elephants in the room -Sophiasburgh councillor Bill Roberts would like to see the community and economic development commission work on poverty and education next term. (Adam Bramburger/Gazette file photo)

Last week, the County’s community and economic development commission used part of its meeting for a visioning session on its mandate and terms of reference.

The review, Davis added, would help shape amended terms of reference, if necessary, to be put before the new council.

First, Davis asked if commissioners felt the commission should have a more focused or broader role in terms of its mandate and its activities.

“We have two really large elephants in a really small room to community and economic development. One is poverty and the other is an abysmal performance when it comes to secondary education. Actually, it begins at early childhood education.

“I would like to see our role and mandate as the commission ignite a conversation about poverty and education outcomes.”

Roberts said it would be a constructive undertaking to look at outcomes and adopt a goal in the County Foundation’s Vital Signs report to set a goal of being the first county in Ontario where everyone has a high school diploma or general equivalency.

He felt, however, those issues could be addressed within the existing scope of the commission but they should be taken purposefully and well identified.

Chair Christine Winiarz Searle said she wasn’t sure a broadening of mandate was needed as much as some clarity of their role. She also talked about the importance of partnerships.

“It’s not so much broad, but working smarter, working better. Setting that foundation and that policy framework, I think that will be those guiding principles,” she said. “I think it’s going to be much more clear depending on the calls to action we hear from other community partners.”

Director of community development and strategic initiatives Neil Carbone followed up by asking commissioners if there was anything over the last term they wanted to address, but didn’t find within their mandate.

Commissioner Tim Ward said he’d have liked to see more high-level policy passed through the commission so that members could share their experience. He said he’d also favour more freedom in discussing issues of interest.

“I know when ideas get passed around, they build and get better. The more people that participate, the better the ideas are and the better the structure that comes out in the end.”

Roberts agreed, speaking of a “catalytic function” the commission can play by fostering discussions like it did with the issues of affordable housing, development, and the rejuvenation of Picton’s harbourfront.

“It’s just about picking our challenges correctly and igniting conversation,” he said.

Sandy Latchford, a new appointee to the commission from the Prince Edward County Chamber of Commerce said she applauded the commission for its efforts to partner with community stakeholders, have conversations, and work as a catalyst. She cautioned that work must be done in a focused way.

“When you want to be an effective agent of change, you have to recognize what you have control over and what you can influence directly,” she said. “Eliminating poverty is a wonderful idea, but they’ve had a difficult time doing it almost anywhere in the world. You can continue to do things like affordable housing, it’s in our mandate as a municipality, and you can soar in getting that done. You can be successful.”

She said there will be areas where the commission can nudge the community toward a goal, but it has to “be careful to not bite off more than it can chew.”

The discussion then moved into public engagement and whether the commission would be interested in playing a lead role alongside the community development department in consultation. Carbone asked whether commissioners would favour becoming a clearing house and aggregator of ideas or simply working on a case-by-case basis.”

“If we have to have community outreach, does the commission want to be the face of community engagement, so to speak?” Carbone asked. “It’s one thing to initiate, it’s another thing to be assigned a difficult task and have to facilitate a process.”

Latchford said she felt a streamlined approach to public consultation would benefit the municipality, whether it is through the commission or otherwise.

“We have so many different public consultations and routes. It’s a real hodgepodge. It’s really difficult for the public to keep track of when consultations take place,” she said. “I really do think it’s a matter of coming together as a group and saying how this municipality will do it and it will do it in every department the same way.”

She said she believes the public wants genuine consultation and it wishes to have a defined path to get that information before a decision is made.

Ward said he feels the commission has to be position to pull information from the public.

“People have felt empowered,” he said. “It’s very good for our commission to ignite some of those action items from the public, get them fired up and move forward with the positives they want to see, not just what we think should be done.”

Winiarz Searle said she felt if there was any opportunity for the commission to be engaged with the public, it should take that opportunity. That said, she felt the interaction had to be done strategically to ensure effective engagement.

There was also some talk about the composition of the commission, which currently allows for between five and seven members.

Roberts said he’d like to see traditional agriculture well represented at the table in a meaningful way. Ward asked how the commission’s composition has traditionally been set.

Carbone said, typically, council has made the decision on composition and tried to have broad representation from different sectors of the economy. Staff would usually point out what potential members could speak to multiple points of interests based on background. He felt it would be important for the commission to address a range of specific competencies, rather than addressing specific sectors.

Ward said it was a good idea to have council choose members, noting the commission has the ability to make subcommittees when more specialized skills are necessary.

Winiarz Searle said she’d support involvement of organizations with similar aims, like the County Foundation or Prince Edward-Lennox and Addington Community Futures Development Corporation, but didn’t feel the size of the commission should expand.

“The size is right. If we get too large, it wil be difficult to have the kinds of consultations and discussions we’re having right now.”

All members favoured expanding the chair’s term from one to two years.

Staff also sought information about the timing and format of meetings.

“I wanted to gauge the commission’s willingness to maybe experiment. We are often faced by limitations of what is considered by most observers a very rigid bureaucratic procedural process, whether committees, committee of the whole, or council,” Carbone said. “The thought occurred to us potentially the commission could be a bit of a test bed for new procedural approaches and processes — nothing totally off the wall, just experimenting with things to improve dialogue, efficiency, the flow of meetings, and transparency.”

Examples could be brainstorming sessions or the use of video or teleconferencing. Carbone said staff could use language in the terms of reference to provide flexibility for the commission to design its own processes on a trial basis.

The membership expressed its openness.

“I think it’s a great idea, though you will have some restraints put on you by the Municipal Act,” Latchford said. “Other boards not restricted by legislation are doing that. Anything you can do to make it more open, flexible, and transparent I think would be to your benefit in the long run.” Based on the discussion, staff will bring a report back to the commission on proposed changes to its mandate and terms of reference. Upon approval, it will move to council for consideration.