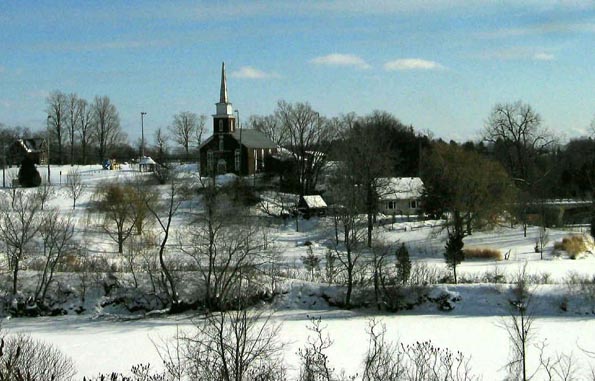 HIGH ON THE MOUNT- In a KPMG report submitted to council, it was suggested the County of Prince Edward divest a number of properties including Mount Tabor Playhouse. (Gazette Photo)

Sometimes the most impactful presentations are the ones that hit closest to home.

The South Shore Joint Initiative (SSJI), a group dedicated to protecting and improving biodiversity in the designated South Shore Important Bird and Biodiversity Area, subscribed to that theory on Saturday as it staged a symposium on the natural heritage and history of South Marysburgh and Athol at the Milford Town Hall.

Five speakers shared perspectives on the development of the south shore from the arrival of European explorers through to present-day landmarks.

Spokesperson Cheryl Anderson said the SSJI felt the day was a success and indicated there are plans to make it an annual occurrence. “Throughout the day the audience members — numbering up to 50 — had questions, comments and discussion to add to the presentation,” she said.

Liz Driver, who launched a judicial review into the White Pines Wind Project with husband Edwin Rowse on cultural heritage grounds opened the event with a talk about what heritage means and how it adds value to living in a community.

Anderson noted that Driver cited a definition of heritage from the 2011 Faro Convention to frame her discussion. The definition suggests “Heritage is a group of resources inherited from the past which people identify, independently of ownership, as a reflection and expression of their constantly evolving beliefs, knowledge and traditions,” and “includes all aspects of the environment resulting from the interaction between people and places through time.”

Driver gave specific examples of farmscapes and buildings that have shaped Prince Edward County’s rural character. Mt. Tabor and the Walmsley House were two such examples.

Following Driver’s discussion, author Orland French quoted from his book Wind, Water, Barley and Wine to discuss the relationships people in the county have with their land and it’s benefits and limitations for agriculture.

Marc Seguin offered his expertise on the lighthouses of the county and eastern Lake Ontario. Anderson said his talk prompted some “spirited discussion” about how to take advantage of the heritage designation of the Prince Edward Point Lighthouse to allow the public to appreciate it and others like it.

Sacha Warunkiw took his audience through a chronology from the earliest European settlement of the area to present day.

He started by talking about Etienne Brule an interpreter thought to be the first white man to visit Huron country and many of the Great Lakes. He left no personal account of his travels, but was identified by the likes of Samuel de Champlain. He lived eight years among the Native Canadians, but it was said they murdered him.

Warunkiw then spoke of Champlain crossing the county from the False Duck Islands in 1615 before heading up the Trent River on a trade route to Lake Huron.

The arrival of the United Empire Loyalists in 1784 saw Maj. Peter Van Alstine bring 194 people to the Adolphustown area from Kingston. Warunkiw said Van Alstine later established the gristmill at present-day Glenora in Marysburgh Township, the fifth township from Kingston. Another prominent Loyalist, Lt. Archibald MacDonnell also arrived in Marysburgh around a similar time. He had been the designated as a leader of Loyalist refugees settling west of Montreal, Warunkiw said, and eventually was responsible for a small group of settlers that came to Marysburgh. By 1800, MacDonnell was appointed lieutenant of Prince Edward County.

The senior officer of the local militia, MacDonnell had become a large landowner and magistrate in the township and the justice of the peace. He died in the community in 1830. Warunkiw explained “his passing marked a transition in leadership from that based on land ownership and military service to one stressing entrepreneurial initiative.”

Another Loyalist, Richard Cartwright, was an early example of such entrepreneurship. He purchased 100 acres in South Marysburgh from MacDonnell, then eight years later he joined with Joseph Clapp, of Hay Bay, to establish a lumber mill on Black River near present-day Milford. His ventures produced rapid growth in Upper Canada.

Warunkiw said Clapp realized the potential of the Black Creek falls as an industrial energy source for a mill, which he later left to his son Philip. Before his death in 1813, Clapp had managed to use a series of berms to control the water to power a second mill and make the energy supply more consistent at Saw Mill Creek. Eventually, Philip would dam the creek to create more water power and, in doing so, he created the mill pond now synonymous with Milford.

The historian spoke about how Milford became a leading centre for lumber in the county in the 1830s with four mills. By 1861, it was the most populous township in the county with a wide range of trades present. including a shipbuilding industry. A drill hall was built in the 1860s to protect against the Fenian Raids and the county’s first Town Hall was commissioned there in 1864. There were also four hotels. That said, Warunkiw said farming became was a mainstay of the community with barley driving the village’s prosperity until the U.S. instituted protectionist tariffs that cut production overnight. That piece of history would seem incredibly relevant now.

South Marysburgh had some lean times in the years that followed through the World Wars. Cheesemaking, canning, rum-running, and commercial fishing remained staples. Soldiers returning from the Second World War revived prosperity, Warunkiw noted, as they had knowledge of technology and they started traditions like the Milford Fair.

Currently, he concluded, home-based businesses scattered throughout the township are a major commercial driver now “following a pattern similar to our earliest history.” Those businesses, complemented by digital technology complement agriculture and artisanal enterprise. It all comes full circle, however, to the early settlers.

“The mill village itself with its school, library, post office, fire hall, church, theatre, town hall, fairgrounds and pond remains a focal point for community activity and cultural life, a testament to the spirit of co-operation that built Milford,” Warunkiw concluded.

Sarah Moran closed out the symposium with information and readings from the Nelson Hicks diaries currently being transcribed in the South Marysburgh Mirror. The presentation spurred further discussion about the digitization of those diaries and other local artifacts for preservation.

Anderson said the SSJI was grateful to the South Marysburgh Recreation Board for providing Milford Town Hall and audio visual equipment at an affordable rate to support the information session.