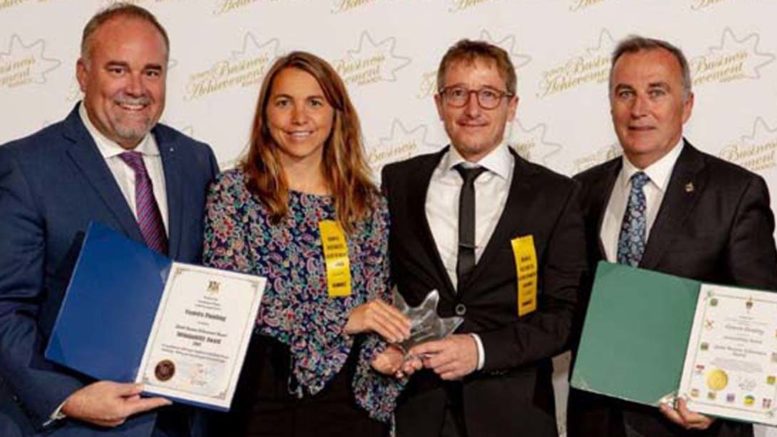 A pair of Prince Edward County businesses were recognized among the region’s best at the 2018 Quinte Business Achievement Awards in Trenton Friday.

Picton’s The Vic Cafe earned the nod for best tourism and hospitality business, while Bloomfield’s Veenstra Plumbing was bestowed an award for sustainability.

Nestled inside the Regent Theatre, the Vic Cafe is a the realization of a dream for its owners Rick and Sonya Szabo. 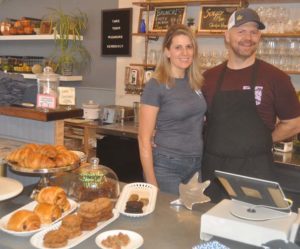 Hospitable hosts – Vic Cafe owners Sonya and Rick Szabo were all smiles after their business was named the tourism and hospitality business of the year in the Quinte region Friday. (Adam Bramburger/Gazette staff)

“In some ways, it sort of evolved from a spark of an idea,” Sonya said. “Rick and I have always wanted to own a coffee shop. When we were first married we lived in Seattle where there was a coffee shop on every corner. We just loved that concept — seeing the same people every day, serving them coffee every day and developing your product.”

Upon opening in 2015, the Szabos realized they had to have great food to pair with their coffee and they built a menu. Soon, the Vic became known for rice bowls, salads, soups, sandwiches and breakfast as well as cafe items. Healthy foods that taste good are of paramount importance.

An expansion brought a patio on the street in front of the Picton library and that further developed the Vic’s reputation as a bistro. Even Vogue Magazine mentioned it as a place to eat. Naturally, local food and drink has become a big part of the Vic’s success.

“That’s being a part of a community,” Sonya said. “We only have county wines and beers and we don’t have any interest in going beyond that. It’s synergy. When we do well, they do well.”

She said she felt that connection to the local community may have helped put the cafe over the top in a competitive field.

“I think part of that was our community involvement. We do a lot of things, like the lantern festival in a few weeks. We do a monthly cookie for a cause. Everything you spend on that cookie goes to a local charity,” she said. “We’re in the community space.”

Naturally, a good hospitality business is defined by its people. The Szabos estimate they employed 40 people in the past year, including 10 full time. “Everybody who comes in says our staff is amazing,” Sonya said.

“We have definitely hit the lottery with a really excellent staff.”

The success has also provided a chance for the Vic Cafe to grow. Though the Szabos love their partnerships with the 100-year-old Regent Theatre and the library, they’ve secured the former Subway location at 166 Main Street with triple the square footage, allowing space for an on-site kitchen. The move will come after Christmas and Sonya said they’re already looking for ways to ensure the experience is not lessened any.

“It definitely will be different in some ways,” she said. “We’re not going to have the tin ceilings and the history of the Regent Theatre, but we want to have the same accents and same mojo.”

That said, Sonya felt personalities and service is at the heart of what the cafe does.

“A lot of that has to do with the right people,” she said.

Looking at the value of the award, Sonya said she believes it will help expand the Vic’s reach across the region.

“People in Belleville don’t know about county businesses as well, it gave us a great reach in Belleville and the greater Quinte area. The locals can add us to the places they go to visit.”

Sustainability isn’t just a buzzword for Veenstra Plumbing owner Chris Walcott. It’s front of mind in the products he recommends and in the very fabric of his business operations.

Most of Veenstra’s office work is electronic, so his wife and administrator Jen, can assign jobs or process payments at home, at their children’s soccer games, or even while away on vacation. While technology allows for the smooth dispatch of five full-time licenced plumbers, one part-time plumber, three apprentices and one labourer, it also has aspects that help the environment.

“We’ve tried to embrace the technology that’s out there and we’ve eliminated 98 per cent of the paperwork,” Walcott said. He added the artificial intelligence involved in the dispatch software allows for more effective route planning.

“Our overall footprint for travel is substantially less than other people’s. Our routes are all mapped out. With the new release in AI used in dispatch software, it automatically maps our routes and who is the closest person.”

Walcott said by operating in a sustainable fashion, it not only is good for the earth, it is also good for his pocket book and those of customers by saving on gasoline or paper expenses. The system is also capable of handling future business growth.

One other innovation Veenstra has tried over the past two years is video conferencing. Walcott said a small percentage of his business now includes calling clients on FaceTime and helping them through their problems. If he knows he can help the client fix his or her own problem, he’ll charge half the price of a service call. If it can’t be fixed, then he’ll come out for a normal service call without a charge for the consultation.

“Most of the calls I accept are ones I know the homeowner can fix. It has a very high success rate and the owners love it,” he said. “They’ve learned something new, accomplished something, and saved money.”

At the same time, Veenstra Plumbing saves on gas and wear-and-tear on vehicles and equipment while resolving cases.

On the job itself, Walcott says Veenstra is helping its clients treat water through the installation of ozone systems.

“They are an organic way of treating the worst water,” he said.

While the systems are not new technology — it has been used in agriculture and winemaking — it is relatively new for residential markets and has recently become more affordable.

“There’s no harsh chemicals, nothing goes back into the environment or your body,” Walcott said. “That’s one technology we push to drop our dependency on chemicals. It’s a great product.”

Asked about the impact a Quinte Business Achievement Award will have on his operation, Walcott said it’s an honour, but one that comes with a fair amount of responsibility as well.

“They’re a reminder that you can always do more,” he said. “All of a sudden it gives more awareness to us in the business. I assume the publicity is going to bring clients — and clients are appreciated — but in reality, it’s mostly the responsibility that goes along with it.”