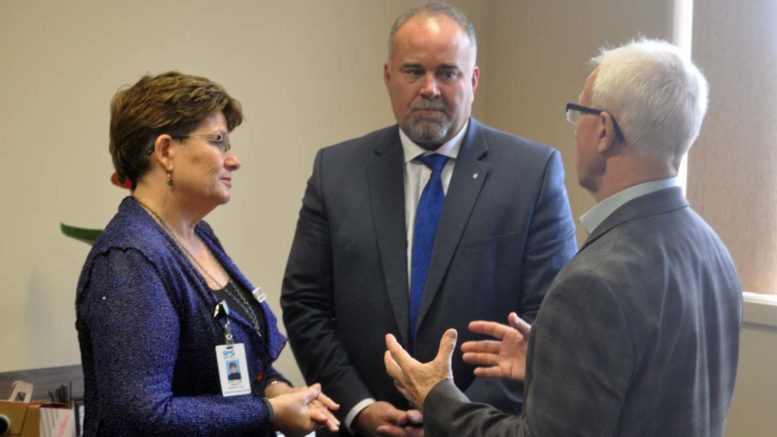 While Bay of Quinte MPP Todd Smith said he wasn’t in Picton to announce a new hospital just yet, he did bring important and welcomed news about the provision of health-care services in the region over both the short term and the long term Friday morning.

Speaking at Prince Edward County Memorial Hospital (PECMH), Ontario’s government and consumer services minister announced the Quinte Healthcare Corporation (QHC)  would receive $2.8 million in one-time funding this fiscal year to help with a surge in patients over flu season. He also announced 128 long-term care beds were allocated in the Bay of Quinte region in the first instalment of a promise to deliver 15,000 over a five-year period across Ontario.

“Currently, QHC is at or above capacity at all four hospitals on a regular basis,” Smith said. “They are planning for flu season in Ontario, which generally means an increase in volume of about 30 per cent. We need to ensure our residents in the Quinte region are getting access to the health care we need. That’s why our government has committed $90 million to address ‘hallway medicine.’” 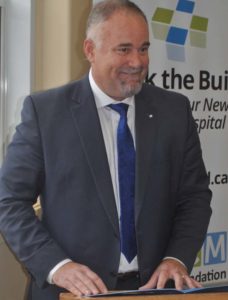 “We know hallway health care has become a reality, unfortunately, in Ontario and we hope that this money will help alleviate the stress on emergency rooms and hospitals,” Smith said, adding the extra resources will allow doctors and nurses to work more efficiently.

The minister also suggested that Minister of Health Christine Elliott and advisor Dr. Reuben Devlin have advised a team to look at funding hospitals more appropriately and adequately on a permanent basis.

QHC president and chief executive officer Mary Clare Egberts said she was “absolutely delighted” by Friday’s news and said it sends a clear message to patients, communities, and care professionals that the province recognizes the pressures the hospitals are facing. She appreciated the gesture.

“Over the past five years, we’ve worked tirelessly at all four of our hospitals to become an efficient system, while caring for unprecedented numbers of patients,” she said. “Thanks to our teams, we’ve made tremendous strides, but we can’t do it without the appropriate level of funding to meet the increasing demand.”

Egberts said the 23 beds will be shared with more beds at each all four hospitals. With QHC being one system, she indicated the beds can be moved where they are most appropriate.

“For example, here at PECMH it will likely be up to an additional six beds. Depending on the sickness of the patients, we’ll try to treat them here as much as we can and if we need to, we’ll have additional beds at Belleville General if they need the added care.”

Egberts indicated the funding will last until March 31, but said “you can’t magically close beds” so if they’re still in operation, they’ll be kept in use for the duration of the respiratory flu season.

She indicated QHC will likely have to add a number of clinicians to support the new beds in an effort to make sure the hospital is adequately staffed to meet need.

“When we talk about increasing the number of beds, what that means is we’re going to be able to provide the care to patients as they need extra help,” she said. “Unfortunately, the flu really hurts patients who are either the elderly or the young. We’ll make sure we have pediatricians and people to look after the elderly. We want to make sure they don’t get extra conditions such as pneumonia that then create very serious issues for us. We’ll have to staff up the emergency department, staff up the in-patient units and staff up in our pharmacy to look after these patients.”

According to Egberts, QHC had a bad week last week with “more patients than we are actually able to deal with.” She said that overtaxed emergency rooms and intensive care units can create blockages for patients to be treated and safely sent home. The region’s aging population and high incidence of patients with multiple chronic diagnoses add further challenges.

“We do have a very aging population and what we know today is it’s not a patient who has one issue. They usually have multiple issues that are keeping them sick. When you get that patient in the hospital, there are so many things you have to take care of. They tend to stay longer and are a bit sicker,” she said. “We don’t have the most healthy population here in the Quinte region. We have a lot of chronic issues such as weight and smoking and alcoholism. Those types of things are creating a need.”

While the funding will help in the coming weeks and months, Egberts encourages people to get their flu shots and to avoid hospital visits while suffering head colds or minor injuries.

In the big picture, investments in long-term care will also alleviate pressure on front-line care at hospitals. Smith said among the first 6,000 long-term care beds delivered in a commitment of 15,000 over five years, 128 are to be built in a new facility proposed by the Mohawks of the Bay of Quinte.

He also hinted that Picton will be on the radar for additional beds as the commitment rolls out.

“I’m really looking forward to working with the folks here in Picton at the H.J. McFarland Memorial Home to ensure the applications they have before the ministry of health are ready to have new beds here in Prince Edward County,” he said. “You’ll know we lost a number of beds over the last couple of years when Picton Manor closed down and we know how important it is to replace those beds.”

Egberts is looking forward to the investment and the transitioning of alternate level of care patients (those who do not more acute health services) from hospital beds to more appropriate long-term care facilities.

“That will help tremendously as well. We certainly have a lot of patients who require long-term care. Having them in our region will make a big difference to those patients,” she said. “We really don’t want any patients who need another type of setting to live in to be in a hospital.”

South East Local Health Integration Network president and chief executive officer Paul Huras took in the announcement. He said the surge funding is “really big news” for the entire region and added the commitment to more long-term beds is a “really important investment.”

“If we have the appropriate number of long-term care beds it can help take pressure off hospitals.”

Mayor-elect Steve Ferguson was also pleased with what he heard, stating the health-care needs of Prince Edward County and the region must remain top of mind for council and the endorsement from the provincial government shows its confidence in QHC and in the local hospital itself.