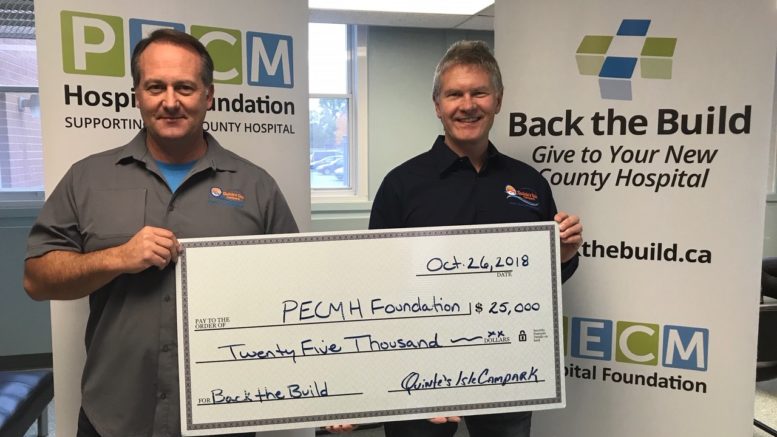 (From left) Steve Ward and Tim Ward of Quinte's Isle Campark have committed $25,000 to the redevelopment of the Prince Edward County Memorial Hospital. (Submitted Photo)

For the Ward family of Quinte’s Isle Campark the decision to  “Back the Build“ in support of the proposal to rebuild Prince Edward County Memorial Hospital (PECMH) wasn’t a difficult one.

“We see our local hospital as one of the high-priority assets in our community so we want to invest in the bright, healthy future ahead for the new PECMH,” said Tim Ward of Quinte’s Isle Campark.

Members of the Prince Edward County Memorial Hospital Foundation were on hand Friday to accept the first installment of Quinte Isle’s $25,000 pledge.

The commitment will be paid in $5,000 installments over the next five years.

Steve Ward says one of the reasons the campground decided to support the Back the Build campaign was so people could see local businesses believe in the hospital.

Both Tim and Steve have personal connections to PECMH as their children were born in the current hospital, all delivered by Dr. Blair Scrivens.

“What better way to give back to our community than investing in the new hospital,” said Tim Ward. “We’re very lucky to have a hospital so close to home and we’d like to keep it that way.”

PECMH executive director Shannon Coull said the foundation couldn’t thank the Ward family enough for their generous donation to the Back the Build initiative.

“Community businesses like Quinte’s Isle Campark truly make the difference between a good hospital and a great hospital,” Coull added.

The first stage of the five-stage planning process for the new hospital set by the Ministry of Health and Long-term Care was approved last February.

Currently the Stage 2 plan is being prepared and will outline operational needs and space requirements for the new facility.

The proposal focuses on the same services in a better space with the highest standards of infection control. Most inpatient rooms will have a private washroom while the emergency department will include more private and flexible facilities.

The new PECMH will be built to handle everything from fish hooks to cardiac events.

“Early commitments from local businesses like Quinte’s Isle Campark speak to the importance of community involvement and the impact it has on the quality of care for those residing and visiting our County and who use PECMH. We are so grateful for the Ward family’s support and interest in the future of our hospital,” added Coull.

Information can also be found at www.backthebuild.ca

Since its beginning in 1985, the foundation has raised more than $6 million for medical equipment and building renovations.

Annually, the foundation funds the purchase of an average of $400,000 in medical equipment.

All together, the Foundation expects it will need to raise $16.5 million over the next five years.

“PECMHF’s job is to serve the funding needs of our hospital; from the bricks and mortar building itself to the repairs, maintenance and purchase of high priority medical equipment needed for patient care. The new hospital project will be the single biggest public build in the history of the County and we are thrilled to welcome Quinte’s Isle Campark and the Ward family to our network of supporters,” said Monica Alyea, chair of the PECMHF.