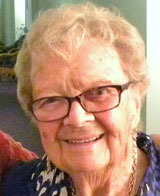 Evelyn (Lloyd) Coburn
(1916 – 2018)
Evelyn (nee Lloyd) Coburn passed away swiftly and peacefully, at the age of 101, on August 17, 2018 at the Prince Edward County Memorial Hospital in Picton, Ontario, after a brief illness. Her daughters, Teresa (Teri) Coburn and Devon Coburn, and son-in-law, Jeff Collis, were at her side. Evelyn inspired everyone who knew her. She was smart, funny, kind and generous. She was a true role model for how to stay young in spirit and grow old with courage and dignity. Even as a very elderly lady, she always ‘looked like a million’ and acted younger than her years. Her insatiable curiosity was a driving force throughout her life. Evelyn saw every moment as an opportunity to ‘conquer the world’ — or, at the very least, improve it. She touched many lives with her compassion and enthusiasm, always ready to help an ailing neighbour, or take on a new ‘cause’. Despite encroaching blindness in recent years, she continued to live fully and passionately. Evelyn’s optimism and determination helped her through the loss of her adored father from scarlet fever when she was 10 years old; and later, through a six-week quarantine at a sanitarium far from home, when she, too, contracted scarlet fever as a teen. Though she was no stranger to sorrow and loss, they never defeated her. Her wicked sense of humour helped to soften many blows. Her parents, Edith (nee Richards) and Harold Lloyd emigrated from England to Canada in 1911. They had two children, Gordon (the elder) and Evelyn, who was born in Montreal on October 19, 1916. Evelyn dreamed of being a teacher but, given her father’s premature death and her mother’s subsequent deprivation, she was forced to leave school in Grade 7 to help support her family. After working in department stores through her teens, she landed a job at the Sun Life Assurance Co. During WW ll she volunteered with the St. John’s Ambulance Brigade. When Evelyn was 28, she boarded a train to Saskatoon, where she married Fred Kay (also from Montreal) on April 29, 1944, while he was on a three-month, military training leave from the war. Soon after he returned overseas, he was declared missing for nine months. Then word came of his death on March 24, 1945. Now a young widow, Evelyn returned to Montreal and found work at Trans Canada Airlines (now Air Canada), ﬁrst as a ticket agent and then as one of the company’s ﬁrst women representatives promoting air travel to other women. In 1946, she ﬂew on one of the early passenger ﬂights over the Canadian Rockies, followed by inaugural ﬂights to Bermuda and the Caribbean. It was a challenging and glamorous job and Evelyn loved it. But, given the times, she was forced to quit when she got married again, to Montreal business man, William Newlands (Newt) Coburn on April 8, 1949. The couple had two daughters, Teri and Devon, and lived in Montreal, with a country house in Melbourne, in Quebec’s Eastern Townships. Evelyn embraced motherhood and became a consummate homemaker. Some of her many activities included:cooking and entertaining, home decorating, dress-making, playing piano, singing in a choir, teaching nursery school, working as a part-time travel agent, starting a youth centre… But one of her greatest passions, since the age of 19, was playing golf — which she continued throughout her life. Evelyn and Newt were serious collectors of Canadiana antiques. They researched and gave public slide presentations on early Canadian glass, and also on the subject of renowned artist, F. S. Coburn (RCA), who was Newt’s uncle. Evelyn was so fascinated by the man and his art that she researched, wrote and published in 1996 (when she was 79), an illustrated biography of him titled: F. S. Coburn: Beyond the Landscape. Soon afterwards, she became a full-time caregiver when Newt developed Alzheimer’s Disease: after 53 years of marriage, she lost him in 2002. Evelyn always considered time precious, especially in her senior years. Whether it was spring gardening in the Eastern Townships, winter golﬁng in Florida, moving from Montreal to Toronto in 1978, then to Picton in 1994, writing her memoir, reading or working on her computer, she was never idle. Even osteoporosis didn’t slow her down. When she was diagnosed with the bone disease in her 60s, she joined a medical study, was successfully rehabilitated, then was featured in a documentary ﬁlm on the subject. When she broke her hip on the Picton golf course at the age of 98, she returned to her condo after her hip operation and month-long rehab, and started up ‘corridor golf’, which resulted in a magazine article about her and a front-page spread in the local newspaper. Evelyn was her own woman to the very end. She didn’t want any “heroic measures” or interventions. She said she was “ready to go.” And, true to her word, she did just that. But letting her go isn’t an option for those of us left behind — for she is ﬁrmly rooted in many many hearts forever.