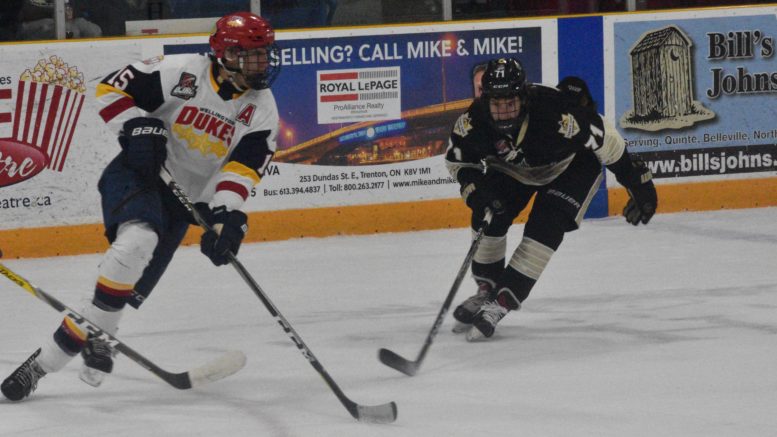 FINDING THE NEXT GEAR- Wellington Duke Andrew Rinaldi steps up his stride to get past a checking Griffen Fox during his club's 5-2 win in Trenton Friday night. Rinaldi had a hat trick to pace the Wellington offensive attack. (Jason Parks/Gazette Staff)

The Wellington Dukes were close-very close- to making it a perfect run on the road this past weekend but of a club looking to figure out the dings in its game, the hockey club should be happy with four out of a possible six points in hostile territory.

After topping the Golden Hawks in Trenton Friday 5-2 and shading the Muskies in Lindsay 5-4 Sunday, Wellington was unable to complete a third period comeback in Cobourg on Monday and lost to the east division leading Cougars 4-3. 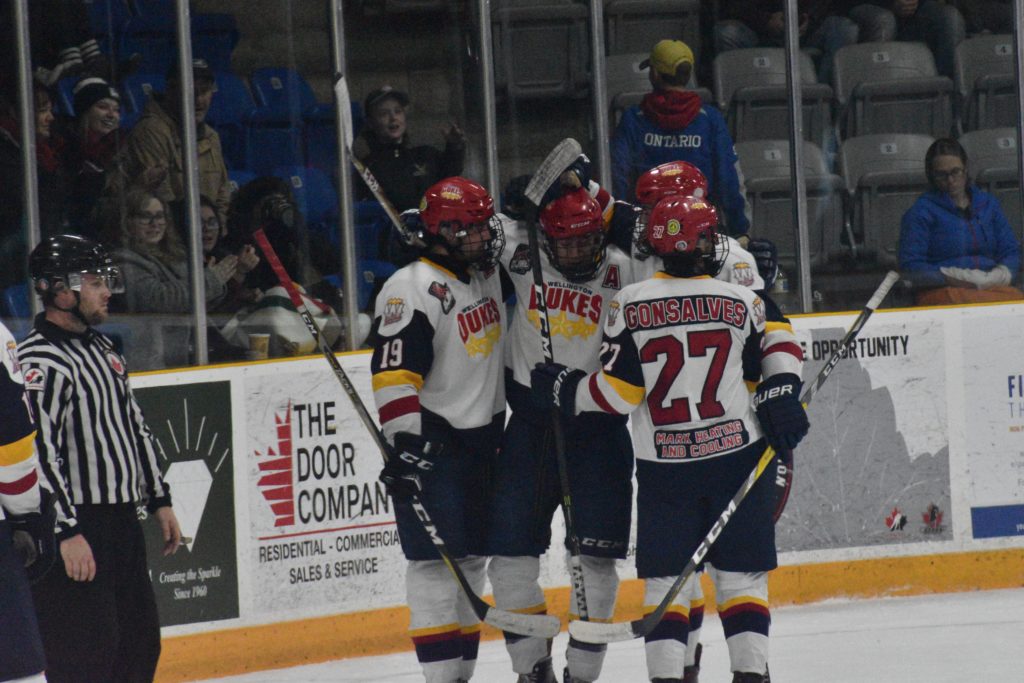 With the 2-1-0 record over the weekend, the Dukes (10-9-3, 23 points) ensures themselves they will finish the month of October above the .500 mark and while the team continues in search of a better defensive concept, it’s clear the club can break out offensively most nights to paper over any current inadequacies.

Wellington Dukes coach John Druce felt the club got stronger over the weekend and actually played its best 60 minute stretch of hockey against the Cougars .

“It was probably our best game of the weekend,” Druce told the Gazette Tuesday.

Wellington would wind up outshooting the hosts 31-22 but Druce credited Cobourg netminder Noah Featherstonhaugh Gowe for foiling the Dukes shooters time and again.

“We were getting our chances but their goalie played really well,” the coach said.

On Monday, Wellington fell behind the host Cougars 2-0 after forty minutes only to come storming back late in the contest.

Without leading scorer Andrew Rinaldi who travelled home to Montreal Monday after this grandfather passed away, Wellington was still able to generate several good looks at the Cobourg net.

Ben Roger finally broke through for Wellington at 1:34 of the third when he converted a Frank Vitucci feed to make it 2-1.

Wellington was forced to endure a couple of breakdowns with about five minutes left in the contest as Colten Cianci and Jack Graffi scored to put the Cougars ahead but Wellington showed some instant resilience to come back on Cobourg.

Elijah Gonsalves sprung Tyson Gilmour at 17:19 to get the Dukes back within shouting distance as 4-2.

Off the ensuing faceoff following the Gilmour goal, Wellington marched down the ice and it was Dylan Massie teeing it up for Ben Woodhouse 13 seconds later to get the visitors to within a goal.

The Dukes had starter Olivier Lafreniere pulled for nearly a minute but were unable to put an equalizer past Featherstonhaugh Gowe in the final seconds.

Although the team left part of its game on the bus on Sunday, the Dukes were finally able to reel in the Muskies after a 61:51 fight at the Lindsay Recreation Complex.

Frank Vitucci capped off a hat trick effort in dramatic fashion, taking a Roger feed and sifting the puck through Lindsay starter Blake Curran for the overtime winner.

“We didn’t come prepared to play in the defensive end of the rink and we know we can be better in that area of the ice. It shows in the stats,” Druce said. “Once the light goes on, they guys seem to get what we are preaching but then it goes away again.”

Down 2-0 after the first, Dalton Bancroft’s pass to Jacob Vreugdenhill at 5:26 got the Wellington bench electrified and the hockey club back in the contest.

Just ten seconds later, the Dukes struck again with Woodhouse feeding Vitucci for his first of three on the afternoon.

In the third, the clubs played it back and forth.

A Woodhouse powerplay marker at 3:24 gave Wellington its first lead of the night but Lindsay’s Curtis Trolley would come back and tie it at 3-3.

Vitucci would score on a nice unassisted effort at the 14:00 minute mark but Lindsay’s Brendan Tomilson found time to sneak an equalizer past Dannick Francouer just 2:48 later, setting the stage for Vittuci’s heroics.

On Friday night, the Dukes kicked off the weekend in fine fashion as they skated past the arch-rival Golden Hawks 5-2.

Despite getting outshot 14-9 in the first, Wellington was able to stake themselves to a 2-0 lead as blueliner Zach Nelson and Rinaldi both beat Trenton starter Benjamin Allard Robitaille in the opening stanza.

Early in the second, Rinaldi continued to roll with his second of the night 3:50 into the middle frame. 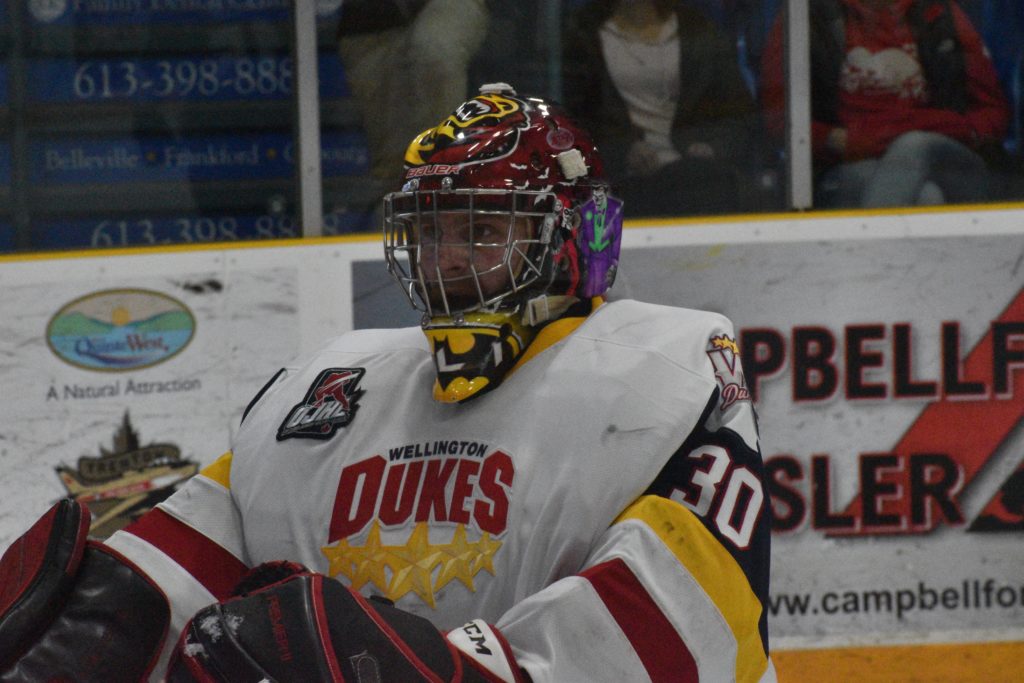 Trenton had a glorious opportunity to get into the game at the 11:24 mark as Peter Falivena was fouled on a breakaway and was awarded a penalty shot only to see Lafreniere stare him down on the breakaway.

Trenton’s Tiger McDonald finally solved the Wellington starter late in the second period and one-time Dukes callup Ethan Cardwell added his third of the season off a partial breakaway early in the third but 3-2 was as close as the hosts would get on this night.

Gilmour salted the game away at 6:12 just as the Golden Hawks were starting to come on, his wrist shot beating Trenton reliever Anand Obeori between the wickets for a crucial insurance goal.

With time winding down, Rinaldi earned an empty netter with 23 seconds left, dipsy doodling past a Trenton defender and keeping his balance while nearly being tripped up before sending the puck into a vacated Golden Hawks cage.

Lafreniere stopped 34 Trenton volleys for his eighth win of the campaign.

“It’s certainly a hard place to play in but I thought we competed really well,” Druce said of the contest.

The weekend closed the books on a very busy October that saw the club play 11 games many of which came in three-in-three nights and three-in-four nights.

“it’s been a tough grind to start the season and we have players that haven’t played this much hockey at this level,” Druce said on ending a busy month by taking four points in three games. “Tt’s a physical grind but it’s something the players have had to deal with mentally as well.”

Leads at Lehigh: The club will be back on the radio airwaves in a big way for the rest of the season as County 993. FM will be broadcasting all remaining Wellington weekend road games. Former OHL play-by-play broadcaster and County FM news director Craig Foster will have the call. Foster was the one time radio voice of the Owen Sound Attack…The move to the FM side of the dial for Wellington comes as a benefit to Dukes fans after Quinte Broadcasting chose over the summertime not to broadcast any Junior A hockey this season and focus on their Belleville Senators broadcasts…In terms of former Dukes, Ben Evans and Mitchell Mendonca are loving life in the Greater Ontario Junior Hockey League. Evans leads the loop in scoring with 38 points while Mendonca is fourth in GOJHL scoring with 34 points. Their Niagara Falls Canucks have exploded from the starting blocks and hold a 12-1-0 record through 13 GOJHL games.