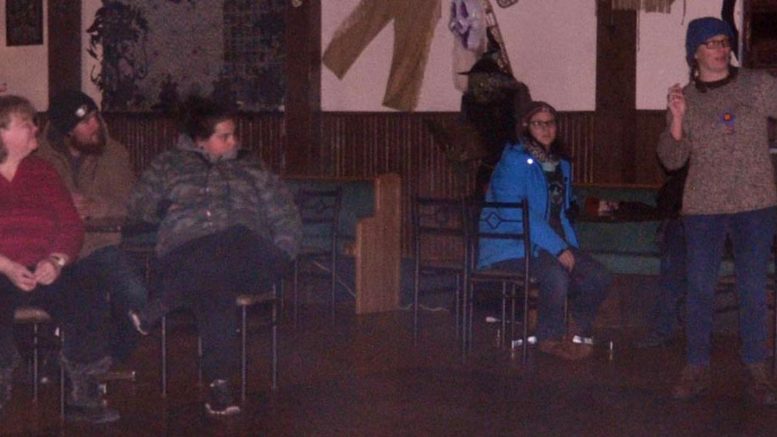 For about 30 people roaming the streets of Deseronto on a late October evening, the chill felt Monday might have had less to do with the weather and more to do with their company.

Leaving from the town’s library, the participants on the sold-out Deseronto Spirit Walk had a chance to experience four local buildings. Deseronto and District Historical Society member Ken Ennis offered notes on their architecture and uses, but medium Leslie DeRushie was the star attraction. She offered her first impression of the energy contained within and the spirits now present.

DeRushie, who grew up in Milford and now lives in Belleville, learned quickly in life she had a special sense that allowed her to see things other people didn’t.

“I’ve had it ever since I was a child. What was my normal, it turns out, wasn’t everyone else’s,” she said. “ When I was a kid, I was like a beacon, attracting a lot of lower-form entities and spirits. Now I can shut it off. If I’m not working, I’m not paying attention to it… but that doesn’t mean it stays off.”

She told her audience she’s learned to control her sensory experiences with the spiritual world and learned her own way of communicating with her visitors. Sometimes, it is people she can sense — and, on rare occasions make out clearly like a live person — and other times it may be an imprint of a past event that has happened in a location. DeRushie added the spirits are always present.

“Spirits hear everything. They know what is going on in our lives, but they can also continue what they’re doing. This isn’t our reality, that’s our reality. This is just a stopover,” she said. “They move around… Time doesn’t exist for spirits like it does for us. Some that I see passed a long time ago. Others could have died yesterday. It really depends on who is coming through.”

During the tour, DeRushie said the spirits were well of the group and well behaved. 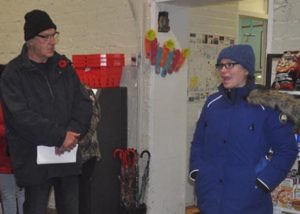 A link to the past – Leslie DeRushie shares her impression of spiritual activity at the Waterfront Market and Storage in Deseronto as the building’s owner Steve Simic looks on. (Adam Bramburger/Gazette staff)

The first stop on the walk was the Dockside Tavern, originally called the Empress Hotel in the 1800s.

DeRushie walked through the bar and adjoining building prior to the tour and shared her experiences.

“It’s my first time in this particular building. I had an awful lot of different sensations when I walked in. Immediately, I felt like I couldn’t breathe. We discussed afterward someone had been stabbed at some point.”

In the current bar, which was a later addition, DeRushie said she constantly felt a horse grabbing at her. She felt it had been there from some time before automobiles and thought it might have been tied up there.

The older hotel, however, was a livelier area. There was a figure she believed had been a chambermaid who was constantly coming and going through rooms. In the basement, there was a feeling of a young boy who had been injured and possibly suffocated by coal. She wasn’t surprised to learn of a coal shoot there.

As a place of comings and goings, DeRushie said the bar held a lot of energy. One of the strong feelings she was getting was of happy times and of music playing before the Second World War. That blended with other activity.

“In a place like this where people are always coming and going, I’m getting an overlapping of times. I hear constant noise above noise,” she said. “There’s not a negative energy here, even though some tragic things have happened.”

One of the owners of the building, who identified himself as Al, said he’s had a few unsettling experiences. He’s constantly heard footsteps and whistling and shared experiences of motion sensor cameras turning on without reason. One night, he says a piece of art screwed into the wall was found on the ground, smashed, four feet away.

Others have experienced strange things too. His step-dad heard “Lawrence Welk-style” music playing one morning quite loud. He banged on the door to ask for it to be turned down, and the music softened. A bartender and his girlfriend were playing pool one night, alone, when they heard a loud banging on the bar. And then, his dog has occasionally been fixated on a far corner of the building, growling with the hairs on its back standing up. DeRushie said she got a sensation from the same corner.

“It had transient people over time coming and going,” she said. “I don’t know if it’s because it was because it was close to water and people were getting on boats. It’s not one in particular, just constant.”

A last sensation there was that of an architect or builder being very protective of every brick and board in the original hotel. That’s significant as Al noted his family has been looking at the condemned structure to see if it can be repaired. DeRushie said she felt a strong sensation to ask the building not be changed.

Just across Main Street stood the Waterside Market and Storage, the last standing factory from the height of Deseronto’s industrial age in the late 1800s. The original building started as a drying kiln for the lumber industry, but was later a plastic molding company and the factory for Canada Optical. An addition comes from one of the region’s former airfields.

Owner Steve Simic said he and his wife have heard constant banging and thumping. His wife, Deb, talks about an old pair of shoes a vendor had for sale that was constantly moved in the night as well as figures of a Victorian lady that would swoop through the store.

DeRushie said when she entered she initially couldn’t breathe because of an overpowering sense of chemicals in the air. She also had sensations of barrels constantly rolling — one that Canada Optical workers on the tour suggested was their machines that pressed the plastic glasses frames flat, of women happily working together and lots of joking.

There was one other revelation tying the building to an infamous economic activity in the region.

“There had to be rum running there. There was booze coming and going,” she said. “At some point there had to have been booze. I can smell it. There’s a lot happening — a lot happening at night when people weren’t paying attention.”

DeRushie said she also sensed the Victorian woman and felt she had the vibe of a teacher. The moved shoes, she said, could possibly have been spirits misbehaving that she was trying to discipline.

The Bayview Hotel, at the corner of Pearl and Dundas Streets, is a more recent build but it had a reputation of being a dark place in its earlier years. Ennis used the term “murderer’s row” to describe it, but said now it resembles more of a senior citizens’ home.

This was the first building on the tour where the medium felt an air of discomfort.

“Normally spirits don’t shake me too much. There is an individual in this building, after speaking to the owners, I believe passed away in a not-very-pleasant passing,” DeRushie explained. “He’s very disjointed, possibly confused or stuck. I don’t see a spirit like that very often. He’s pacing back and forth. The energy is very heavy in this building.”

DeRushie said she wouldn’t be surprised if the activity is leading to headaches or anxiety among residents and advised the building’s owners to get the space smudged (a practice that is said to drive away negative energy). She also said negative energy can leave imprints on a space. She felt there were a lot of drugs running through the building in the past and had a bad feeling about the basement.

The Bayview’s owners have also had their share of stories to share including locked doors opening and a message “I’m here” inexplicably written on a dusty window in the laundry.

DeRushie also said the area around the Bayview Inn was “very active” spiritually and she wouldn’t be surprised by sightings there.

Before returning to the library, the tour stopped at the Jane Rixen’s home on Thomas Street. Built around 1894, the house was home to E. Arthur Rixen, the town’s first librarian and an accountant at the Rathbun Company. The home contained woodwork including a banister, bookcase, doors and trim believed to be originals built by Rathbuns, who developed Deseronto as a company town. It was a pleasing way to end the tour for DeRushie.

“In the last house, I was immediately surrounded but a family dynamic. It felt warm. It felt like we were going home. There was an appreciation for keeping historical things,” she said.

The only spirit she sensed was Jane Rixen’s aunt Bernice, who lived there until her death in 1990. DeRushie said Bernice told her she wasn’t happy dark cupboards were replaced with lighter ones in a recent renovation. Otherwise, it was a happy time.

Back at the library, DeRushie took questions and did a few readings for tour participants. The walk was a fundraiser for the library and the historical society.