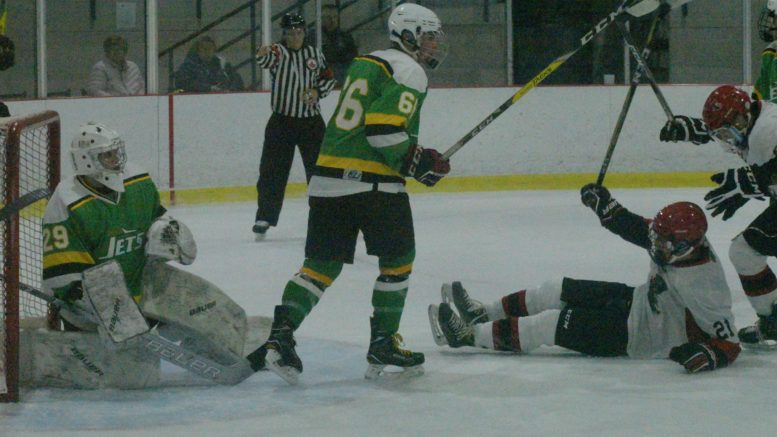 You’ll have to excuse the Picton Pirates if they felt like they were playing with house money even after they lost on home ice to the Uxbridge Bruins 4-0 Sunday night.

A pair of wins preceded the loss to the Orr Division opponents and were clutch victories as the Pirates dressing room started to look like the Emergency Department of neighbouring Prince Edward County Memorial Hospital.

“We were definitely happy with the way the weekend went in the face of the depleted lineup and all the injuries,” Pirates head coach Tyler Green said. “The players really showed their character and grit this weekend and battled through all the adversity.”

Sometime late in the second period of Thursday night’s home game against the Amherstview Jets, the Picton Pirates (10-5-1, 21 points) best performers appeared to be the medical staff of Keith Tyers and Annie Moynes. 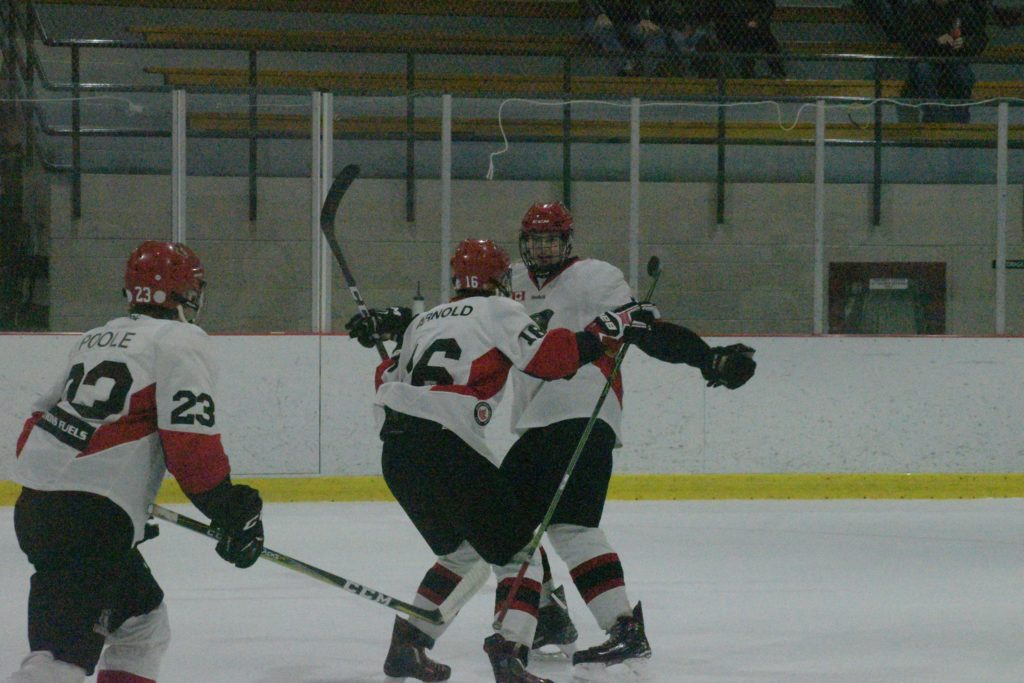 The value of any hockey training staff often gets left out of this space and other recaps but when the injury bug bites (and it bit the Picton Pirates hard this weekend), having competent and highly dedicated staff like Moynes and Tyers around can make all the difference in the world.

Down 1-0 late in the second and without the services of blue liners Cooper Rogers and Matthew Scott and forward Owen Dever due to injuries, Picton lost two key contributors when captain Devin Morrison and Nate Boomhower went down in quick succession partway through the second period.

The Pirates looked like a stalled and frustrated bunch skating off the ice for the second intermission in a game where Amherstview netminder Andrew Lumb was equal parts perfect and lucky, a lethal combination to a team that was struggling to capitalize on prime opportunities.

The game finally started to turn for a Picton club that stopped floundering and started to find its way to the Amherstview net with authority in the last five minutes of the contest.

With 90 second left in the game, Justin Arnold completed a spin-o-rama shot on a loose puck in the high slot and Picton had finally solved Lumb and tied the contest at 1-1.

But the Pirates weren’t complacent to simply move the game into over time and quickly  brought the attack to the Jets zone as Amherstview was a stunned bunch of skaters in the final minute and the puck became like a hand grenade on their sticks.

During a scramble in front of the Amherstview net with ten seconds left, Logan White’s shot attempt went off of a prone Scoley Dow and past Lumb, tumbling into the Jets’ cage for a go-ahead goal.

While he has scored nicer markers in his junior hockey career, Scoley Dow’s first as a Pirate would stand up as a winner in a 2-1 victory over its closest challenger.

“When those players went down to injury, that was a big hit to the group but in the third period the veterans like Arnold and Griffen Conger really picked it up and showed their leadership, win the battles in front of the net,” Green said.

When the puck ping-ponged into the Amherstview net, bedlam was set off on the Picton bench. 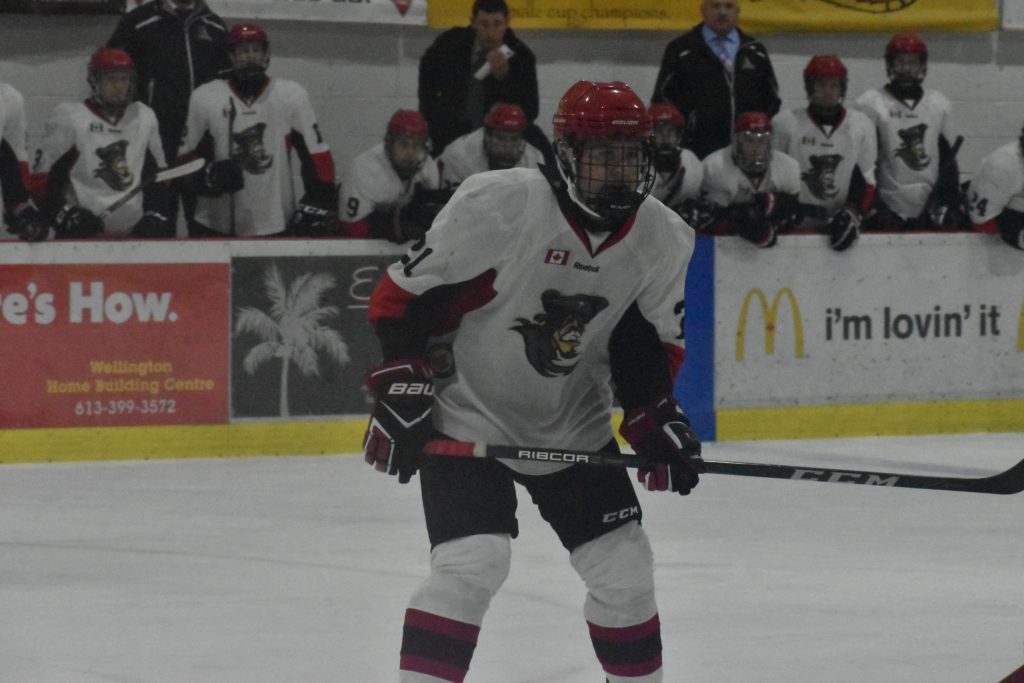 “The boys were pretty ecstatic and we finally saw a bounce to go our way,” Green added.

On Saturday, Picton was in Port Hope to take on the same Panthers that victimized a lack luster Pirates squad at home Oct. 18 for it’s second win of the season.
Still stuck at two wins through 13 games, the Pirates had no wish to lose points to the hosts a second time.

“We certainly reminded them that we let a game slip away to these guys and we needed a strong effort to make sure we controlled out own fate,” Green said.
The result of Picton’s resolve was a workmanlike 4-1 win.

Matt Poole and Scoley Dow had first period goals for Picton and the visitors increased their lead in the second when Dow set up Arnold for his fourth goal in three contests.

An unassisted effort from Poole early in the second put the locals ahead 4-0 and only a shorthanded breakaway effort off the stick of Panther Evan Speiran at the 7:57 mark spoiled the outing by Picton Starter Kyle McNair.

On Sunday, tasked with large, physical and veteran Uxbridge Bruins at home, the injury depleted Pirates played the visitors tough for about 52 minutes.

Uxbridge’s Toby Cooper put his team ahead 1-0 in second period but Picton was just a shot away through most of the contest.

With under 10 minutes to go in the third, Aiden Reilly’s shorthanded effort was the back breaker for the exhausted Pirates who went into battle the previous night with just 16 skaters and were looking every bit worse for wear in the final moments of Sunday’s game.

A pair of Bruins goals less than 15 seconds apart at in the 15th minute sealed the scoring in favour of the visitors at 4-0.

“We knew we had to be ready to pay the price against the Bruins and I was really happy with the guys overall,” Green said. “We were working hard and it was a really tight game right up until the final eight minutes or so and we had players that were getting way more ice time than they are used to.”

Conger got embroiled in a scuffle at the end of the game and picked up a one game suspension, meaning the Pirates will be even more shorthanded this weekend when they head to Little Britain on Saturday and play in Gananoque on Sunday.

Green was hopeful for some good news from sick bay this weekend as his club carefully prepares for a pair of games against clubs that have losing records.

Both Rogers and Scott were considered day-to-day and Morrison could be back for the weekend.

“I think some of them will be back for the weekend but we will still be short bodies heading into Saturday,” Green said. “We will be preaching to them that they need to maintain focus, play a team game ans stick to the systems. This a tough league and if a team doesn’t show up prepared and ready to pay the price, they won’t win. It’s that simple.”

Picton doesn’t return to the safe harbour of Huff Estates Arena until Sun. Nov. 18 when they host North Kawartha.

On Board with the Pirates: Picton native Nolan Dawson made his Pirates debut Sunday and became the ninth Prince Edward County native to suit up for the local Provincial Junior Hockey League squad this season. Dawson plies his hockey trade with Quinte AAA Major Midget Red Devils.