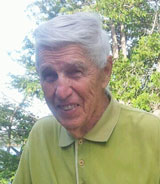 Herbert Mudge
It is with great sadness that we have to say goodbye to a ‘Gold Platter’ Herbert (Herb) Mudge. He retired at an early age from Dofasco to spend winters in Florida and summers on the water. He sailed his boat ‘Zara’, a wooden blue hulled Alden Coastwise cruiser sometimes single handed. It was a fixture in Prinyers Cove. His philosophy was ‘Keep it simple’. In his 97th year, still very active and mentally acute, he succumbed to an underlying malignancy the early morning of November 4th, 2018. It was his wishes to keep private and not have a public celebration of life. He was the husband of the late Valerie and Jeanine and predeceased by his daughter Moira. He will be missed by many.