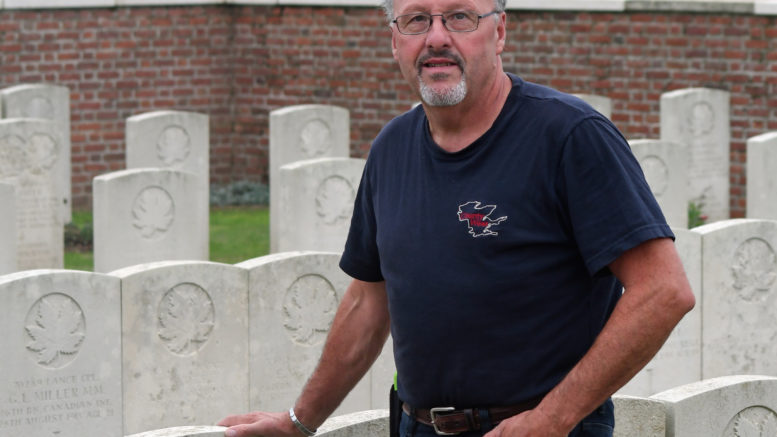 A Prince Edward County man who holds the memory of a family member who perished in the late stages of World War I dear has honoured that sacrifice with a visit to the gave of the fallen soldier.

Private Malcolm Linford French, an Ameliasburgh native and the only child of Gilbert Hall French and Emma Jane (Hubbs) French, was part of a Canadian contingent that fought in the bloody Battle of Scrape at the end of August, 1918.

Part of the Hundred Days Offensive that was the final push that caused the collapse of the Western Front and, eventually, brought the Great War to a close, the Battle of Scrape in the north east of France is noted for both the accomplishments of and the costs to the Canadian Corps fighting under the command of General Arthur Currie.

In total, the Canadians were able to take 3,300 German Empire soldiers prisoner and capture both large sections of defensive trench systems as well as large amounts of weapons and ammunition.

But the cost was dear as 254 officers and 5,547 soldiers in the 2nd and 3rd Canadian Infantry Divisions paid with their lives. 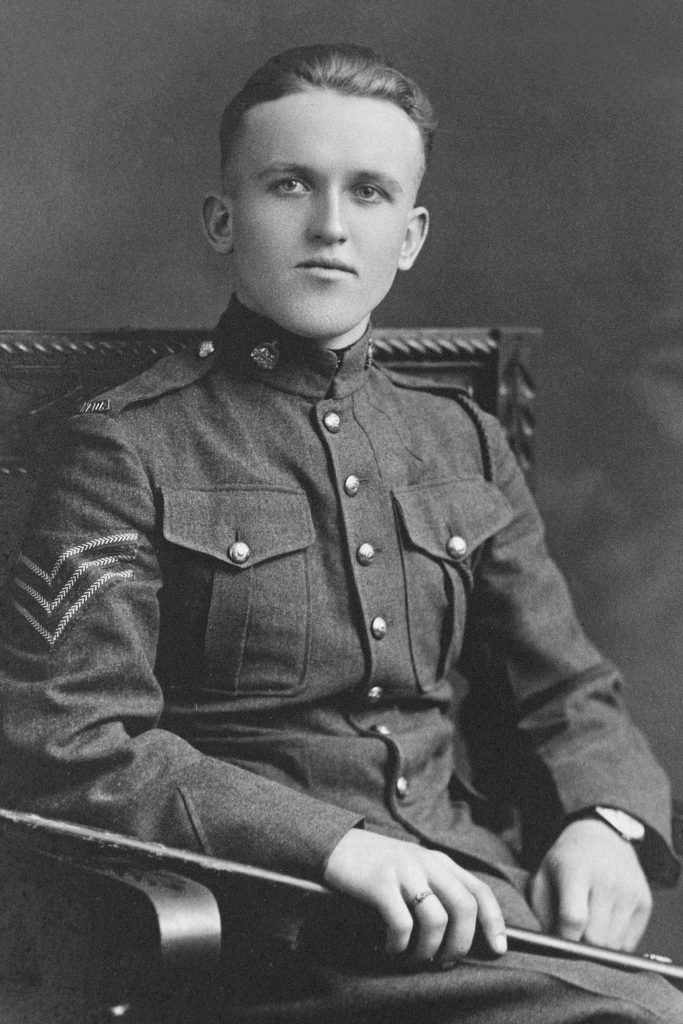 Malcolm Linford French during his training when he was appointed to serve as an acting sergeant in the Canadian army. (Submitted photo)

One of those was  French, a Prince Edward County native whose family had later moved from Ameliasburgh to Belleville where Gilbert Hall French was the gaoler.

Pte. French, just 20 years old and a recent attendee of Belleville High School, died on the final day of the Battle of Scarpe while assembling near Upton Wood, a final battleground where the Canadian Corps would clear out the remaining Germans in the the Fresnes-Rouvroy trench system and declare victory.

Robert Hubbs, himself an Ameilasburgh resident, paid a special visit in early September to French’s final resting place,  a Commonwealth cemetery site where 191 allied soldiers including the earthly remains of eight unknown soldiers, are interred and memorialized.

Growing up, French’s sacrifice was never lost on Hubbs.

“Malcolm Linford French was my late father’s first cousin,” Hubbs told the Gazette. “My father was born in 1923, five years after Malcolm’s death and my late father was named after him. My father died in 2007 and he and I would often talk about visiting Malcolm’s grave in France and my dad encouraged me to do so if I could.”

Enlisting in late fall 1916, French was promoted as an acting sergeant just 15 days into his training, a common practice by the military at the time of temporary promotion of during the training period.

Hubbs believed Gilbert Hall French’s position as head of the Belleville Jail and French’s aptitude likely had something to do with the promotion.

Arriving in England aboard the RMS Olympic on June 9, 1917, French, by then having reverted back to the rank of Private, was absorbed immediately into the 6th Canadian Reserve Battalion.

The Canadians including French were encamped at the Sun Quarry flint mine near Upton Wood during the Battle.

The site is now home to the Sun Quarry Cemetery which is maintained by the Commonwealth Graves Commission.

For Hubbs it was an emotional visit but the Ameliasburgh resident admitted a feeling of peace when coming upon the walled cemetery.

It marked the first time a family member had made pilgrimage to the tiny cemetery located near the village of Chérisy.

“Being very close to my parents, even before I was going to school, they would tell me how my father got his name and we would get Malcolm’s medals out and they would place them in my small hands and speak of Malcolm,” Hubbs said. “They were never hidden and it wasn’t like we weren’t to speak about it. I knew him as a family member and I knew the medals I was handling were his.”

Upon returning from France, Hubbs was provided a little more information surrounding French’s death and it was discovered a mortar went off near him while his company was assembling for the final attack on Upton Wood. 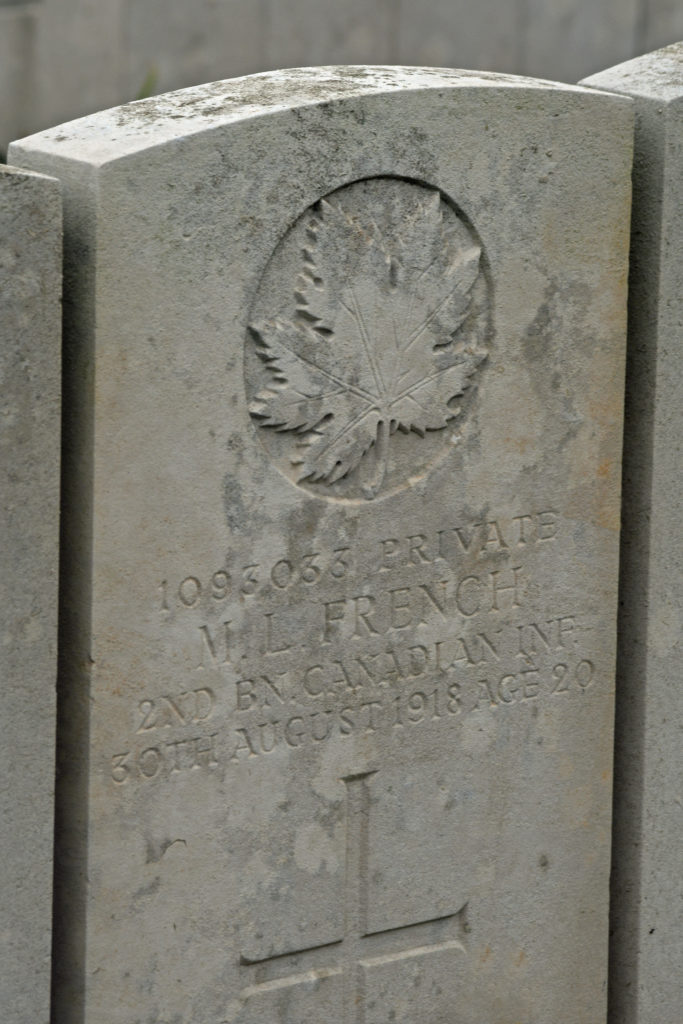 Shrapnel went into French’s left breast and he died within a couple of minutes.

“It’s something I’ve always wondered about, whether he suffered greatly for a long time or whether it was instantaneous,” Hubbs added.

French lies next to the remains of an unknown soldier and Hubbs spoke to the care and maintenance of the memorial site.

While at the Sun Quarry Cemetery, Hubbs said he felt very much as peace. Pheasants sit perched on the cemetery wall and the quiet French countryside gives way to a beet field with Upton Wood standing within sight of the memorial.

Hubbs left a picture of French and a poem that appeared in the Belleville Intelligencer at the time of French’s funeral a few weeks after the mortar attack in a book of memories that’s kept in a wall vault at the cemetery.

In addition, mementos from Shire Hall, the City of Belleville and a Canadian flag were also left at the graveside.

“Being there, I found it all very comforting,” Hubbs added.

French’s name is listed at both the Picton and Belleville Cenotaphs thanks to being both a Prince Edward County native and secondary school student in the city.

Hubbs said there’s a story for every soldier and veteran listed at the respective cenotaphs across Canada and he hopes sharing Private French’s story will help encourage other families to examine the service of other soldiers and bring more stories into the light.

“Everyone has a story and like it says in Ode to Remembrance ‘Lest we forget’,” Hubbs said. “We need to remember.”

The following is a poem penned by Emma (Hubbs) French in the days following the notification that her only child was killed in action in Northeastern France on Aug. 30, 1918.

Our One and Only Boy

He never quite left us, our loved one who passed.

A thousand sweet memories is holding him fast.

We miss him, and mourn him, in silence unseen.

And live in the memories of joy that has been.

We saw him in ant days grow up from year to year. 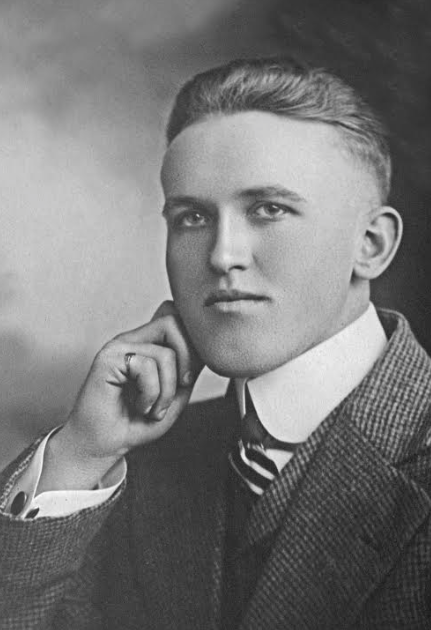 That some day be a man.

Tenderly we watched his every step ’twas our united joy.

To think, what he would be some day, our one and only boy.

When war broke out to us he said ‘My conscience tells me to go.

For I must do my duty dad. They need my help you know.

For I’m no better than they who suffer, and die on Flanders Fields. With their loved ones far away.

A chance to do something, be some one. Prove there’s purposed in life, with a vision of manhood before him.

He longed to take part in that strife.

One day there came a message that message gave us pain.

For the one we loved and lived for would never return again.

SOME day, some time, our eyes shall see

The faces kept in memory

who grew to highest manhood

Who dies for others, dies a perfect man

Only a little while I and then with joy

We do believe we’ll meet again

OUR ONE and ONLY BOY