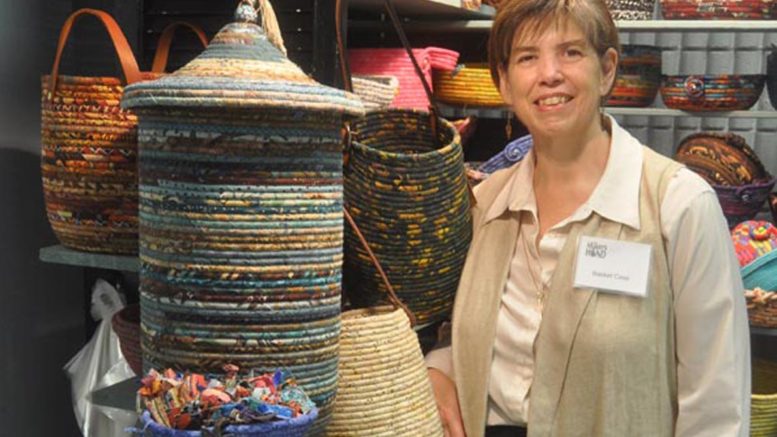 Basket case - Ruth Houtby was a hit at this weekend’s The Maker’s Hand as she showed off her handcrafted baskets made from brightly coloured materials and rope. (Adam Bramburger/Gazette staff)

Artisans travelled from near and far last weekend to sell their handcrafted items at The Maker’s Hand in Picton’s Rotary Hall. Whether they’d shown once or several times, each echoed the same reason for attending: quality.

Vicki Sharp was a vendor in the show 15 years ago when Peta Hall started it. While still showing her jewelry, she’s now one of the lead organizers for the show. She said, both then and now, it was an easy show to wish to be part of.

“It’s very comfortable and everybody is friendly and welcoming — like everybody in the county,” she said. “It offers such a wide, diverse selection of products for people and everything is excellent quality. People are at the top of their game, so you’re getting a high-quality show.”

Sharp said year after year, there is turnover in the people showing at The Maker’s Hand and said that keeps interest. She has personally advocated for artisans she’s seen at other shows to come to Picton and add different flavour to the event. This year, some of those people came from as far away at St. Catharines, Guelph, and Quebec. 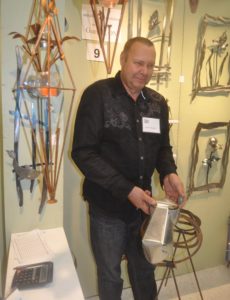 Metallic mementos -John Zondervan, a regular at The Maker’s Hand from Guelph shows off some of his work, including a sheep that was a popular seller at last year’s show. (Adam Bramburger/Gazette staff)

Ultimately, there are also familiar faces that customers look forward to seeing each year. According to Sharp, that all comes down to the success those people have had in the market already.

“If you don’t have the sales, you don’t come back. That’s the bottom line. If you make things, for some of those things you’re going to have post-show sales. Some of it also has to be viewed as advertising and marketing. You might not have that sale right at that moment, but people can find you after the show.”

Hall, who was visiting on Friday, said the customers often follow a particular pattern.

On the first day, women will visit when they don’t have children with them and they’ll buy items like clothing and jewelry. Saturday is typically more of a family day and then, on Sunday, serious buyers will return and make their final selections. The crowds on Fridays are also eager to get the first pick at some rare items.

“I saw a basket there, I had to do an interview and when I came running back it was gone. All in about a half-hour,” Hall said. “It’s one of a kind. It really is. There’s not mass production of these things.”

She said it’s also nice to see the vendors brought items at all price points. Sharp said there were good buys to find.

“The thing about fine crafts is you’re always getting your money’s worth. There’s hours and hours of labour in everything you see here. The prices are really not that high.”

The creator of that basket that caught Hall’s attention was Ruth Houtby, of St. Catharines. She said Sharp approached her about exhibiting while they were at a different show in Muskoka. She found herself interested in the concept because The Maker’s Hand has a really limited number of vendors, compared to shows in larger centres. Her corner booth featured a cornucopia of creations in all different colours and sizes. A quilter, Houtby started taking her materials, covering rope, then coiling them and stitching it all together.

“It’s a pretty labour intensive process,” she said. “It takes quite a while, but I love the end result.” Houtby said she loves working with a wide colour palette with “very few neutrals.” She figured she had a couple of hundred products in Picton for the show, but said she never really counts her inventory. “I can never have enough,” she joked.

Like many of the creative people at the show, Houtby said her art has evolved out of a hobby and it isn’t her full-time job. She works and she takes care of her parents, both in their nineties. When she has time, she creates.

“It’s about third on the list, but it’s my sanity, it’s my escape and it’s a whole different world. That’s why I keep at it.”

Houtby said she received great reaction at the show with people in awe of the process and she thought she’d be successful in her goal of strong sales.

Michelle Kosoy and her husband Pierre Bouchard were also new vendors this year. They recently settled in the county because they found friends in the local arts scene and wanted to be live in a smaller community.

Kosoy works in clay, creating textured dishware and other pieces. For some pieces, she’s used wooden blocks purchase in Nepal about 30 years ago for shaping. Bouchard works in cast, fuzed and sandblasted glass. The pair has had a studio together for nearly 30 years and it does a lot of custom work for architects and designers. 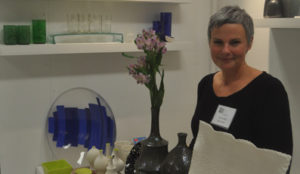 Staying at home – Michelle Kosoy shows off some of her clay work and husband Pierre Bouchard’s glass work at The Maker’s Hand. The couple recently moved to the county and after doing large shows in New York and Toronto, decided to take part in The Maker’s Hand. (Adam Bramburger/Gazette staff)

According to Kosoy, they have had a studio together for years and are in the process of converting a barn for that purpose here. In years past, they exhibited at the New York Gift Show and Toronto’s One of a Kind Show. In The Maker’s Hand, they saw some similarities and differences.

“We walked it last year and we liked the quality of the show. We decided we wanted to stay local and not travel as far, so we decided this will be the only show that we do. It’s close and the quality is high,” she said, adding they didn’t want to be around as many people or go to the expense of being in the big-city shows. Early on, Kosoy said some customers went to the studio where Bouchard displays his work to see more. She also received some positive feedback. While sales are great, she loves the connections to be made.

“Really, it’s meeting people,” she said. “A lot of the designers and architects we work with now, we’ve met at these shows.”

Guelph’s John Zondervan started coming to The Maker’s Hand over a decade ago after hearing rave reviews from friends and said for he and his wife Heather, it remains “one of our favourite shows to do.” They produce handmade, small-scale pieces from metal. Zondervan said the people make the show.

Each year, there’s financial reward to being involved, though he says it’s always something different that attracts attention. This year, serving ware was selling really well. A year ago, whimsical metal sheep were hard to keep in stock. Even just seeing other like-minded artisans is a benefit to attending. “

We know a lot of people because they’re all on the same circuit. I see them more than my family.”

The show, a signature event for the Prince Edward County Arts Council, also provided a new opportunity to local artists to show the quality of items they’re producing. For a first time, the Prince Edward County Studio Tour had its own booth, which was shared by six artists who volunteered to participate. One of those artists, Annik Despres, said they were able to promote all of the members by distributing studio maps to guests visiting the county. Another, Tina Osborne, said the tour’s 25th anniversary book, County CollAboRaTive, was a popular purchase over the weekend.