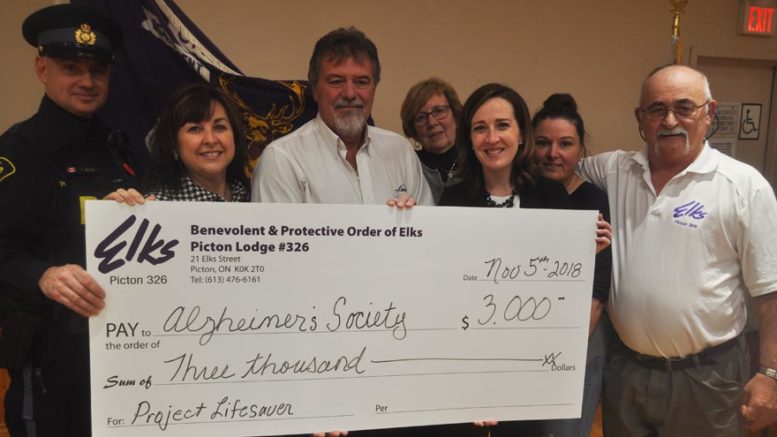 The Picton Elks are doing their part to ensure Prince Edward County is dementia friendly.

On Monday, the service organization handed over a $3,000 cheque to the Alzheimer Society of Hastings-Prince Edward to bolster supports for individuals living with dementia and their caregivers.

The money was raised through the Elks’ Backyard Barbecue Draw, fundraising through bingos and raffles co-ordinated by Lisa Zachariah, and craft shows at the hall organized by Alyssa and Kristy Leavitt. Rick Wilkinson, a past exalted ruler at the Picton Lodge, said the Elks felt the services provided by the Alzheimer Society are important, particularly with the aging population in the county.

Maureen Corrigan, the society’s executive director, said the donation will be used in two ways. The first is supporting Finding Your Way, education programs that deal with safety and the risk caused by people with dementia wandering.

“We’ll be able to go out, make the presentations and reach people up front,” she said.

The other is supporting the purchase and support of Project Lifesaver bracelets that will provide a radio link to police for people identified as at-risk due to wandering. There bracelets cost several hundred dollars to buy and there’s an ongoing service cost that may be prohibitive to some people without the aid.

It’s estimated that 60 per cent of Canadians living with Alzheimer disease or other forms of dementia will wander away from home at least once. Half of the people not found within 24 hours are at risk of serious injury or even death.

Corrigan said in August the system helped find a missing person in Centre Hastings and there’s a good chance it saved a life when time was of the essence. She said responders tracked the signal to a dense woods where the woman was found on the ground. While they were all around the area in question, they couldn’t find the woman.

“If she hadn’t been wearing the bracelet, she likely wouldn’t have survived,” she said.

Wilkinson said he could understand the challenge. He first encountered a wandering person while working on the Glenora Ferry and he couldn’t believe how far she had travelled before she was located.

Locally, it’s hard to quantify how many people Project Lifesaver could benefit as some who could use it don’t feel they need it.

The program has been in the region since 2015 when it was first piloted in Belleville. The John M. and Bernice Parrott Foundation was instrumental in bringing it to Quinte. The OPP and the Picton Kinettes have also been supportive of efforts to bring the program to Prince Edward County.

The Alzheimer Society hopes it will be able to stage a mock rescue later this month to raise public awareness for Project Lifesaver in the community.

Meanwhile, Corrigan said there are staff working in Prince Edward County to provide education and support for families living with a dementia diagnosis. She encourages those families to look past social stigma and contact the local office for help and information. The phone number at the Picton office at the corner of King and Paul streets is 613-476-2085.