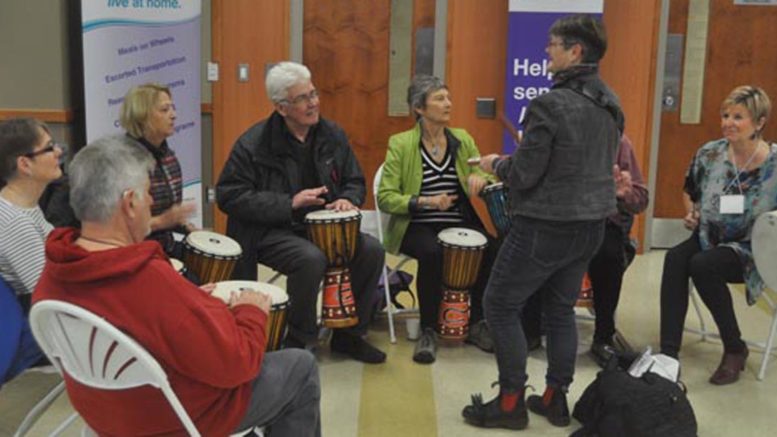 They’ve got the beat -Interactive drumming lessons, presented by the County’s public library system, were just one of the many opportunities for seniors on display at Thursday’s fair. (Adam Bramburger/Gazette staff)

County seniors showed a keen interest in the supports available within their community to live an engaged, active life Thursday — and many service providers nurtured that interest.

“We just thought it was amazing. It certainly exceeded our expectations,” said Community Care executive director Debbie MacDonald Moynes. “We’ve never done something lie this. Once we became a Seniors Centre it became an opportunity for us. We thought we would embrace it.”

After receiving funding from the Older Adult Centres of Ontario to support the day, Community Care staff have been busy planning since July.

Exhibitor booths ran around the perimeter of the Highline Hall and up through the centre. In all, there were 47 stops visitors could make. They could learn about Alzheimer’s, diabetes or cancer and sit down with Family Health Team nurses to have blood pressure and sugar levels checked. Local politicians, funeral homes, and lawyers had information on wills and estate planning. Groups like the Prince Edward County Master Gardeners, Prince Edward County Quilter’s Guild and local libraries shared volunteer opportunities. Retirement homes and the proponents of Bloomfield’s LoveSong development shared accommodations information.

“We really thought we had a good mix of housing, travel, and health,” MacDonald Moynes said. “There was so much for people to see, learn, and do.”

Every so often, participants could break from displays to take part in a Tai Chi demonstration or a fitness break. There was also an opportunity for seniors to take part in traditional drumming, courtesy of the County Library. 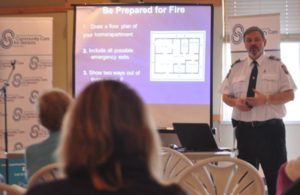 If that wasn’t enough, the adjoining Wellington Rotary Room hosted a series of informative break-out talks. Fire prevention officer Mike Branscombe talked about prevention and safety, stressing that from the time a fire alarm sounds there is only three minutes before it becomes fully involved. He also spoke a bit about new materials being used in home construction and vapours. He shared the importance of escape plans. Public health inspector Aptie Solokoo shared information about how the county is in an area declared endemic for Lyme disease and discussed what to do when encountering ticks.

Matt Del Grosso, a screening and prevention co-ordinator with the South East Regional Cancer Program ended the day with a fascinating talk about cancer occurrences and prevention. Among the information he presented were statistics showing that life expectancy for people with all sorts of cancers in Ontario has improved in the past five years. Del Grosso said lung cancer remains the most deadly diagnosis and said Prince Edward-Hastings remains an area of high occurrences because of access to cheap tobacco products. He said his best advice for cancer prevention was to not smoke.

“Almost every evaluation that was handed in said they learned a lot at the fair. It would be hard not to with the many different things that were there,” she said. Ameliasburgh Keith McPhail was one of the seniors who attended. He enjoyed the day. “I thought it was a very good event. It’s a welcomed thing to come to the county with so many seniors here. The number of people who participated providing information was quite helpful,” he said.

McPhail learned about a new shop on Picton’s Main Street that offers shoes, clothing and devices to help people stay active. He said it was beneficial to know about, seeing that type of product is tough to find even in Belleville.

Recently, McPhail said he’s been looking for information about seniors programming and services, but found it a chore trying to get to the different agencies and businesses catering to an aging population. The one-stop shopping was helpful.

“All this information was right there and I could easily scan it. I took hope two to three inches of literature and it all loves very promising in terms of background information — even about things I’m not really concerned about today, but could be down the road.”

McPhail said he’s already shared his experiences with others who didn’t attend.

“I’ve already told a number of people that I’ve been at it and it might have been helpful for them to have a chance to go,” he said. “Particularly after the day, I said it was well worth their while attending if it happens again.”

MacDonald Moynes said organizers are definitely considering doing the fair again next year. She also hoped this year’s event helped people understand the aims of the new County Seniors Centre. In the coming weeks, there will be open houses for those centres in town halls across the county. Those, she said, will provide a chance to follow up on information from the fair and find engagement in the community.