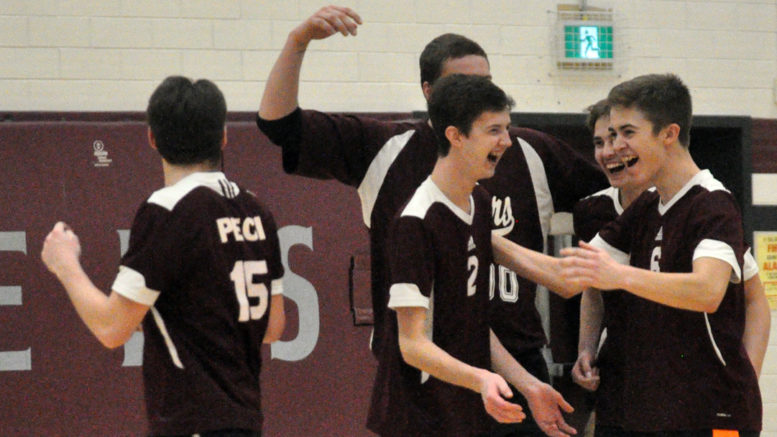 The PECI Senior Volleyball Panthers did just enough to guarantee themselves a spot in Tuesday’s Bay of Quinte Conference tournament in a tie effort against East Northumberland Monday.

After dropping the first game of the set 25-20, the Panthers took a come-from-behind win in the second, 25-16. Trailing 9-6, the Panthers rolled back with some steady play with service.

They captured four consecutive points with Logan Stark at the service line, then adding seven more as Cole St. Pierre served next in the rotation. They also got multiples with Brodie Byford and Dylan Morrow putting the ball in play. 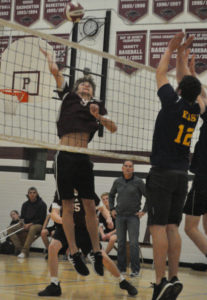 On the attack – Will Ronan attempts a spike at the net in the Panthers’ final regular season set against East Northumberland Monday. The teams split the two games. (Adam Bramburger/Gazette staff)

PECI’s net presence was particularly strong with the likes of Byford, Stark, Will Ronan, and Nolan Dawson stepping forward to finish passing plays for points throughout.

Coach Dave Inch said the set follow a familiar script for his Panthers.

“The first game they were kind of flat on their feet. The second game they pumped it up and brought up the momentum,” he said. “That’s been our story all year. We’ve always come from behind. We rarely ever take the lead. Once they come from behind, they just get fired up and it’s almost like you can’t stop them.”

Inch said he felt Ronan and Dawson each stepped up his play when a win was needed. The Panthers finished the regular season with a 2-6-2 mark, good for eighth in the conference. Inch said he felt if the team could consistently find its complete game, it might be a sleeper come tournament time.

“It’s been up-and-down. They’re a great bunch of guys and they have talent, but they have good days and bad days. We’ve been struggling through the season, but in the games that have really counted they’ve come through. There’s great talent there individually, but bringing it all together has been a challenge.”

The Bay of Quinte Conference playoffs were Tuesday in Trenton at Marc Garneau.

Meanwhile, in junior action Tuesday, the Panthers completed a 4-4-1 regular season by downing the Dragons 25-8 and 25-6. With the two wins, the Panthers’ captured 390 points this season and lost 359. Their playoff tournament would be held Wednesday at Quinte Christian in Belleville. Results were not available at press time.