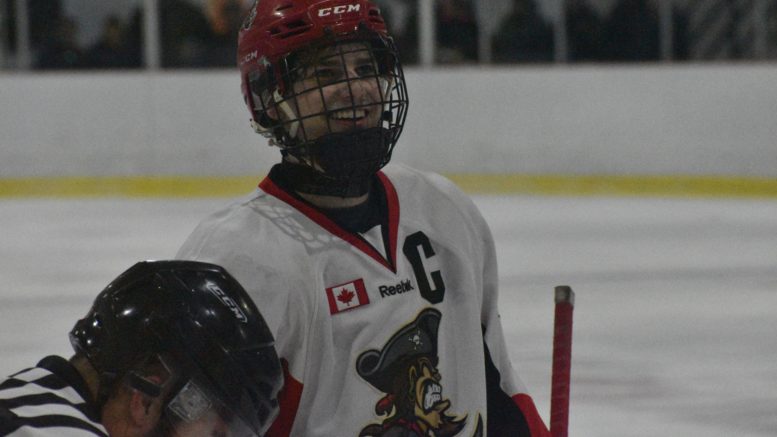 BACK IN THE LINEUP- Picton Pirates captain Devin Morrison returned to the lineup this weekend after missing two games due to injury. (Jason Parks/Gazette Staff)

Despite a good section of the club residing in sick bay, the Picton Pirates kept up their pace this weekend taking the full complement of points available to them.

In a very physical match up in Little Britain on Saturday, the Pirates scored four power-play goals en route to busting the Merchants 9-4.

A night later in Gananoque, the Pirates exploded for four goals in the second period as they marooned the Islanders 6-3.

With the wins, Picton (12-5-1, 25 points) has been victorious seven of their eight previous contests —  a nice stretch considering the work out the team’s medical staff has been has been tasked with.

Injuries have plagued the Pirates over the last 30 days yet the team continues to rack up wins and keep within shouting distance of the Tod Division-leading Napanee Raiders who top the field with 31 points..

As of Monday, Picton and Napanee are the only two clubs above the .500 mark in the circuit and it early indications point to a two horse race for the Tod crown prior to the 2019 PJHL playoffs.

With Scoley Dow, Nate Boomhower, Owen Dever and Cooper Rogers and others recovering from various maladies and unavailable this weekend, Picton was still able to score 15 goals in two games this weekend as their offence came from some familiar and new sources.

“We were happy with the effort and the results overall, especially with a short lineup up,” Pirates bench boss Tyler Green told the Gazette Monday. “It was a gut check for the players but it was awesome to see them pull it all out.”

The fact Saturday night’s affair north of Lake Scugog was a punishing affair should come as no surprise as the Merchants had the 9-1 drubbing they endured in Picton Oct. 14 fresh in their minds.

But Picton arrived in tiny Little Britain with the perfect antidote to overzealous play —  a potent power play that went 4-for-6 on the night and carried the Pirates to victory.

Green said it was good his squad had a pair of power-play goals in the first to help set the tone for the contest.

“If teams are going to run around and take penalties on us, we have to make them pay,” Green said. “We changed up some things in practice and had some new personnel out there and those players took note and really capitalized on the opportunities they were provided.”

Captain Devin Morrison took little time in acclimating himself back into the lineup as he set up Matt Poole’s powerplay goal to open the scoring at 5:57 and then scored an even strength goal at 11:58 of the first.

“It was great to see him back in the lineup. He brings that leadership you can’t replace and plays a strong 200-foot  game that you can depend on,” Green added.

Derek Vos also scored a power-play goal in the first and added a pair of helpers in the second but by the opening minutes of the the third, Picton’s up-and-coming blueliner was on the ice after taking a heavy hit from Merchant forward Tyler Watson.

Watson was given a five-minute major on the play and Vos, who left the ice under his own power, was transported by ambulance to the Ross Memorial Hospital in Lindsay strictly as a precautionary measure.

Landon McLellan (two), Tristan Cowan, Will Harrison, Noah Brant and Matthew Scott all had goals in the final two periods as the visitors stayed comfortably ahead of the hosts.

Brennan Bush made 31 stops for his seventh win of the season.

On Sunday, Picton and the Islanders played it close for the opening period plus 1:38 before the Pirates pulled ahead to stay.

Poole staked the Pirates to a 1-0 led 40 seconds into the contest but Islander Matt Donovan had an equalizer just under six minutes later.

County native Cole St. Pierre scored his first as a Pirate to help Picton to a 2-1 lead at 14:08.

The Islanders would again tie it up with a goal early in the second.

But as they have shown a penchant for a few times this season, Picton had a lighting response for the opposition.

Just eight seconds after Luke Donovan tied the game at 2-2, Kurtis Wood fed Poole for his second of the contest to restore Picton’s lead at 3-2.

“This is a young group and when they get scored one, they get hungry to come back with a quick response. I think that really speaks well to their character,” Green said.

The Poole goal set Picton off for three more in the frame as McLellan, Griffen Conger and Jack Dow all scored to set Picton up for a 6-2 lead after 20.

Kyle Casford’s goal with under three minutes left in the third was the only shot to sneak past Bush since the opening of the second period and the Tweed native stopped 34 Gananoque shots for his second win in as many nights.

Green said he was hopeful to welcome back some of the skating wounded at practice this week but added some of the injuries might take a few weeks before they were fully healed.

“It’s a great thing that we have such a deep roster this season,” Green added.

Picton heads to Lakefield on Saturday for a date with the Chiefs before finally returning home to host the North Kawartha Knights on Sun. Nov. 18.