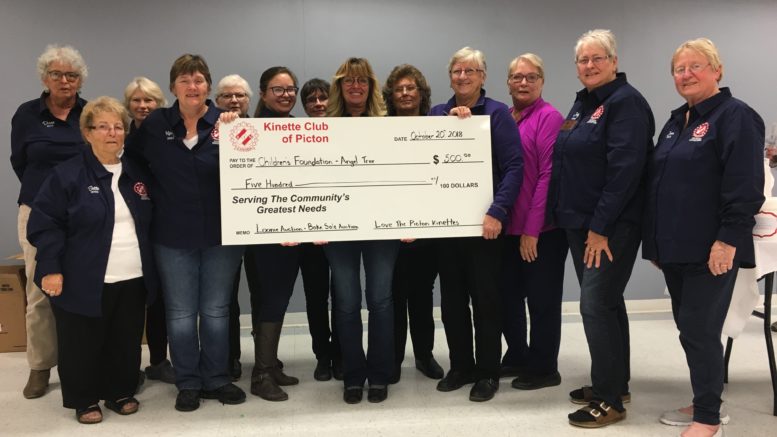 A GOOD START- Members of the Kinette Club of Picton present Susan Rose, fourth from right, $500 to kick off the 2018 Angel Tree campaign. (Submitted Photo)

In a perfect world, Susan Rose and her tireless volunteers at the Children Foundation’s Angel Tree office would put their feet and simply glide into the Christmas season because they would know each and every child in Prince Edward County was bound to have a very merry Christmas.

But one doesn’t need to look very far to determine that we all reside in a world that’s far from perfect, even in this highly desired bucolic ‘burgh where the naturally beauty belies the stress and suffering the holiday season brings to some families.

A three decade plus legacy of the Prince Edward County community caring for children at Christmas continued this week as Rose and her helpers opened their Angel Tree office at Benson Hall on Monday.

Sadly, it wasn’t long before the first applications were picked up by parents and guardians who know they will struggle this Christmas.

Administered by The Children’s Foundation, a body under the auspices of Highland Shores Children’s Aid Society, the Christmas Angel campaign supports between 250 and 300 children annually, supplying donated gifts, food and warm winter wear to those that would go without this season.

This corner continues to call her the angel behind the Angel Tree program and the while the driving force behind it for virtually every year since its inception back in the 1980’s tries to deflect praise, Rose knows the benefits and relief the program can bring to beleaguered parents who are struggling to make ends meet as the cruel harshness of winter approaches.

“The point of the program is to give children a nice christmas and give a family a hand up at a time that can be incredibly hard and stressful,” she explained.

Typically businesses , service organizations and individuals will take a number of paper angels off the Christmas tree at the campaign office and buy gifts for that child, returning them prior to the delivery date, typically between Dec. 20-23.

Others give donations of children’s gifts or money that are accepted at the campaign office by Angel tree volunteers who then purchase toys and goods and/or distribute them appropriately amongst the remaining angels that have yet to be selected from the tree.

In addition to the gift program, the office accepts donations of food as well as new winter clothing.

“There are several families that might miss the OPP snow suit program and we try to outfit those children as well,” Rose added.

To ensure there’s no duplication, Rose said the Angel office coordinates with all other Christmas time assistance programs in the area such as those administered through the Salvation Army and the local food banks.

Several groups and organizations take up the challenge to ensure not a single paper angel is left on the tree at the campaign office and those include students and faculty at Prince Edward Collegiate Institute, the Kinsmen and Kinette Clubs of Picton and the Rotary Club of Picton amongst others.

“PECI does a wonderful job each year and has for many years,” Rose said. “The Kinsmen and Kinettes not only take on a bunch of angels but they’ve provided us office space here at Benson Hall for the last five years.”

To kick off the campaign, the Kinettes presented Rose with $500, the proceeds from their bake sale at their annual ‘Loonie Auction’ and pledged to take on securing gifts for two dozen angels.

In addition to all the stresses and hiccups that can happen at the start of the annual campaign, Rose mentioned the postal strike could put a crimp in operations this year as donor request letters might hang up in the mail system for an extra couple of days.
In addition to late letters, Rose confirmed that after a reconfiguration at the Cement Plant, the former Cement Plant Social Club ceased operations this year.

An former ongoing donor that typically generated thousands annually for local children in need, Rose spoke highly of the cement plant workers group who generously donated and organized many efforts every year to support the Angel Tree program and other local worthwhile causes.

While the program has been supported by TCF for just the last few years, the continuous efforts of Rose and the program’s volunteers is not lost on Kate Anderson, Foundation program coordinator for Prince Edward County.

“It’s amazing to see this level of dedication here year after year and the Foundation is lucky to have Susan Rose and the team partner with us in this program,” Anderson said. “We look forward to it every year and we hope the support from the community continues to grow.”

In addition to the Angel Tree campaign, TCF supports a number of sport, camp and music subsidy programs for families to take advantage of to ensure no one ever gets left out.

Information on these off setting registration fee programs are available at the campaign office which is currently open weekdays 10 a.m. To 3 p.m. Monday to Friday but would be expanding as Christmas draws near.

For more information on program enrolment or donation, please call 613-242-9206.