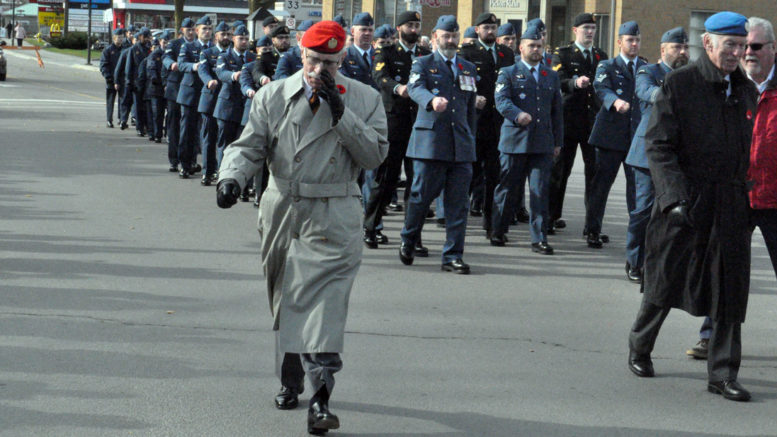 The sun shone bright on Picton Sunday morning as crowds gathered huddled together around the cenotaph at Main, Chapel and Ferguson streets to remember those who fought for freedom. 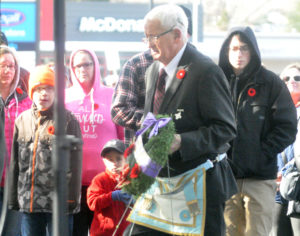 “It’s a very special day because it’s the 100th anniversary of the Armistice, which is the end of World War 1,” she said. “To celebrate that, this evening at sunset all of the churches that have bells in the county and all across Canada are going to be ringing their bells 100 times. When you hear that tonight, take a moment and remember whether you had anybody who served or not. Remember those people who went before us and have given us our freedom today.”

Kennedy said she was pleased to see an enthusiastic turnout at the cenotaph for the service. They were there not just in support of the 66,000 Canadians and Newfoundanders who died and the additional 172,000 wounded in the First World War, but those who fought in subsequent conflicts such as the Second World War, Korea, Iraq, Afghanistan and various NATO and peacekeeping missions.

Padre Rev. Bill Kidnew offered the Prayer of St. Francis in memory of their efforts and Padre Rev. Rick Hamilton offered a reading of John McCrae’s poem “In Flanders Fields.”

As the bells from Picton United Church sounded the 11th hour, the bugle sounded the Last Post and there was a collective still over the downtown block. Reveille followed as the flags were raised again.

More than 70 wreaths were laid beside the cenotaph by dignitaries, family members remembering loved ones, and representatives of local organizations. Bay of Quinte MP Neil Ellis placed the first memorial, while Mayor-elect Steve Ferguson and outgoing councillor Gord Fox represented the County.

Kennedy said Ellis was on hand in Picton that morning because he had presented the Memorial Cross to the Ives family in memory of W.O. James Blake Ives. A retired master sniper with the Princess Patricia Canadian Light Infantry, the veteran of the Bosnia, Croatia, and Afghanistan conflicts died in 2016 at age 47. His mother, Marilyn, and sister, Lori, were on hand to watch father Jim place a wreath in his memory. Jim was dressed in Masonic attire and supported by his Lodge brethren. After placing the wreath, he stood silently with his hand over his heart to reflect for several lingering moments.

Moved by the display, Kennedy remarked “That’s what it’s all about.” 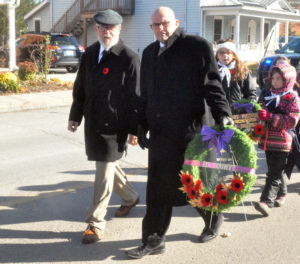 According to Veterans Affairs Canada, the decoration — commonly known as the Silver Cross — was first instituted Dec. 1, 1919. It is presented to the families of Canadian soldiers who died in active duty or whose death was attributed to their service to the country.  The silver cross bears the inscription of Queen Elizabeth and features a crown on the upright arm of the cross and maple leaves on the three other arms. In this case, the reverse was inscribed with Ives’ name and service number.

After regimental, family, and community wreaths were laid with the help of 851 Prince Edward Royal Canadian Air Cadets, a lament was played then a healthy parade of the Legion colour guard, the Duke of Edinburgh Pipe Band, veterans, and 8 Wing military personnel started their solemn walk back to the Picton Elks Hall for fellowship activities. Patrons remained at the cenotaph. Some reflected silently, others took photographs, and many took an opportunity to place their own poppies in remembrance. 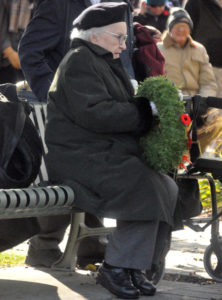 Remembered – Rose Cole clings to a wreath to lay in memory of her husband LaVerne. (Adam Bramburger/Gazette staff)