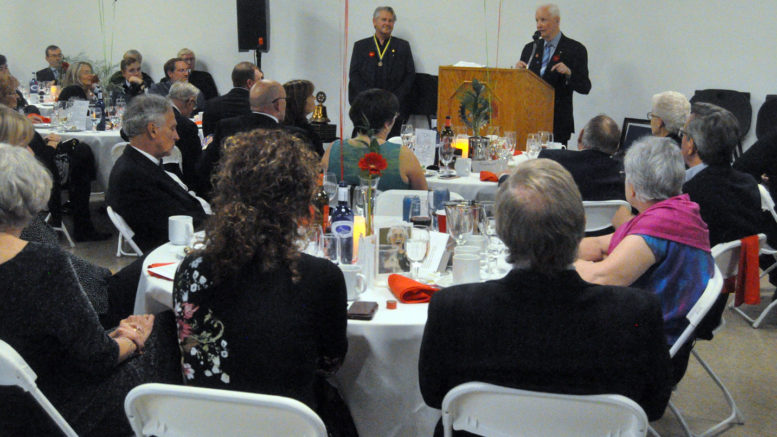 The Rotary Club of Picton celebrated 75 years of service above self Thursday by hosting a gala dinner for about 100 members and guests at the CAPE on Main Street.

An audience that included past Rotary International president Wilf Wilkinson, district governor Mary Lou Harrison, and mayor-elect Steve Ferguson heard about the club’s inner workings and saw a snapshot of the causes it has helped in more recent years.

The club’s longest serving active member, Frank Wright, said when he joined 40 years ago members had to be owners of a business or in a management position. He recalled being extremely nervous to join esteemed business leaders, only to find a warm group with a sense of humour. He recalled being horrified when a member he looked up to accused him of stealing a spoon, only to find out that had been a running gag during the fellowship lunches.

“I just about dropped dead,” he said. 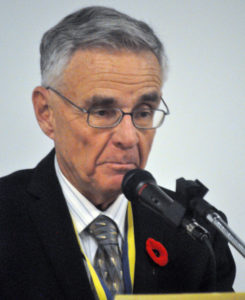 Memories – Frank Wright, the longest service active member of the Rotary Club of Picton shares some of his experiences in his 40 years with the service organization. (Adam Bramburger/Gazette staff)

After the ice was broken, he found he enjoyed working locally and globally with club members — even if it meant storing 1,000 cans of peanuts in his office for a past signature fundraiser.

“I have greatly enjoyed my 40 years of Rotary and I trust my membership has made a positive impact over those years,” he said. “Rotary has evolved with the times and I have certainly witnessed many changes to the club I joined. I look forward to continuing my participation in a club that has been a significant part of my life.”

Mark Davis joined the club 34 years ago. He recalled Rotarians at the time like Barney Hepburn, Homer Shields, Bob Elliott and Wilf Harrison seeming larger than life. Then, he said, it was a time of high expectations — club members were expected at more than 60 per cent of meetings and participation was viewed as mandatory — but also of camaraderie, tomfoolery, and a number of activities that developed friendships. Really, anything focused on bringing people together in a spirit of service.

“At the end of the day, it was all about getting the job of Rotary done,” Davis said. “Over the last 34 years, I’ve watched our club grow, change, and evolve and the world has done exactly the same. With all that change, it’s often less than comfortable. I’m proud to consider what has been accomplished by so many who have come before us and those who considered themselves to be proud Rotarians.”

Davis, who worked as a licensed funeral director for 40 years, looked forward to his hour-and-a-half on Tuesday as an escape from the reality of shared grief and death.

He looked back fondly on being involved in Easter Seals and seeing a local Tammy raise awareness for that project. Soon, Davis said he learned the great satisfaction that comes with the concept of service above self. Later, he became the club’s president — a fulfilling task.  And through the years, he said he felt fortunate to work on numerous campaigns and events — both locally and abroad, like the club’s contribution to the eradication of polio in all but two countries, its support of Shelter Boxes for those affected by natural disasters, and its leadership in creating the Atorkor Vocational Institute, which is changing lives in Ghana.

Davis said at an international convention he once heard words that affected him deeply.

“Our mission in Rotary is to help those whose feet are firmly planted on the lowest level of the ladder of fortune,” he said. “Each and every one of you is here to celebrate our good work, the work Rotarians do, and those who have come and gone before us in the past 75 years of our small club. We are privileged to have the opportunity to celebrate, but we’re more privileged to have the opportunity to help our community, our country, and our world.”

President Brenda Hellyer also shared memories and hers entered around the Rotary exchange program and hosting teens from Denmark, France, Sweden, Japan, Argentina, Belgium and Holland. The mother of five said her family benefitted from sharing their home.

“I cannot begin to tell you how enriching this experience was for my children. As a single mom, there was absolutely no way I was going to be able to bring my five children to all those countries,” she said, explaining they learned tolerance and understanding of other cultures.

Hellyer also said she enjoyed showcasing who Prince Edward County residents are through the annual cash calendars and, on a personal level, enjoyed the fun club members have.

Also during the evening, a panel consisting of leaders from four supported agencies shared information about how the club had supported them over the years.

Rev. Lynne Donovan, of St. Andrew’s, talked about Reaching For Rainbows, an after-school program that serves 30 girls ages 6-9. She said the club has been behind the project since its inception. One of her first memories was coming to speak about the vision before the doors opened. Each week, the club has an ace jackpot for its members. The six people who split the prize that day agreed to give $1,000 to the girls.

The support continued and the club has given proceeds from its annual Lilac Ride the past two years. Rotary, Donovan said, offered the steering committee courage to increase its budget recently to pay staff a fair wage and add an administrator.

“Over the last eight years, you have been faithful to these girls and their families,” Donovan said. “I can affirm for you again and again that your investment in young girls changes communities.”

Karen Moore, the executive director of Hospice Prince Edward, shared how Rotary is one of seven benefactors on the donor wall at its residential care centre. The club was instrumental in securing funding to create the hospice and several of its members sat on committees establishing the home, which allows people in Prince Edward County and beyond to palliate outside of hospital.

“Thank you to Rotary and others for being forward thinking and for having a vision to know that a Hospice Prince Edward residence was needed in your community. I’m in awe, really, of the compassionate gift you’ve given to residents and members of this community.”

Aaron Wiik, a second-class warrant officer with the 851 Prince Edward Royal Canadian Air Cadets squadron said Rotary’s ongoing support of the program has helped the squadron maintain a building at Macaulay Mountain, keep the lights on, purchase supplies and equipment, and send participants to camps and summer programs.

“Without the support of Rotary and other organizations, we would have a struggle on our hands and not be able to do the things we do today,” he said.

Wiik also offered a personal reflection on how the club helped him get his wings as a pilot, a milestone on a path he hopes will lead to Royal Military College in the fall. Two summers ago, he attended the gilder program at Mountain View. Rotarians made that happen. 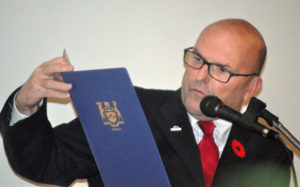 Marking a milestone – Mayor-elect Steve Ferguson reads a proclamation from the Province of Ontario on the occasion of the Rotary Club of Picton’s 75th anniversary. (Adam Bramburger/Gazette staff)

“You gave me a $300 scholarship to cover the cost of the Transport Canada exam. That’s $300 I really didn’t have. It made a world of difference. While it may be something small like $300, that made the difference between me becoming a pilot and not becoming a pilot.”

Lastly, Prince Edward County Memorial Hospital Foundation vice-chair Barbara McConnell gave the club credit for all it does locally. In particular, she talked about its Wilf Harrison Memorial Golf Tournament, which helped buy priority medical equipment. McConnell said the club has given the foundation $96,845 and challenged it to raise the money to reach the $100,000 “Grand patron” support level. It wasn’t too difficult a challenge.

“Done, tomorrow,” club treasurer Maurice Carlier said before she could finish her sentence.

McConnell told the club the foundation is fortunate to have partners like it as it embarks on its Back the Build campaign with the hopes of having shovels in the ground for a new hospital by 2023.

Wilkinson, a member of the Rotary Club of Trenton, who visited 57 countries as international president in 2007-2008 said he had the good fortune of interacting with many Picton Rotarians and he expressed his satisfaction the club is still delivering on its mission.

“The Picton club is a club that has always been energetic. Through my 56 years in Rotary, I’ve had the opportunity to attend many sessions here,” he said. “Nothing to me seems to have changed. The enthusiasm, the vitality, the drive of Rotarians in this city, Picton, and the support you’re giving to the hospital, the Air Cadets and the hospice. I tell you this, it has been wonderful to be here and listen.”

“When I hear from the club and when I hear from community partners what you have done for 75 years, I need to say to you, ‘Well done!’ I am excited to learn what will happen in the next 75 years.”