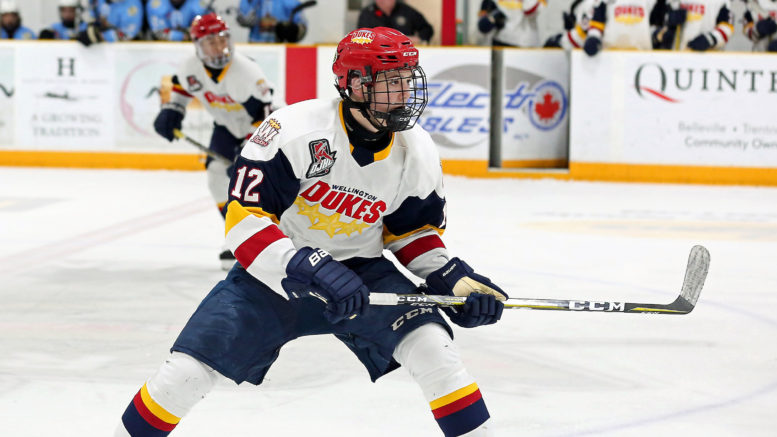 CLUTCH WIN-Daniel Panetta and the Wellington Dukes were able to secure a valuable two points Friday in Trenton where they beat the Golden Hawks 4-3 in double overtime. (Photo by Ed McPherson / OJHL Images)

Still having trouble what to make of the current edition of the Wellington Dukes?
Don’t fret, this corner has been covering them for nearly a decade and a half and the 2018-19 version still remains a quandary to these eyes.

A team that should be amongst the best in the Ontario Junior Hockey League on paper has had an ongoing consistency issue for past two months.

Last weekend, the club dropped games against the lowly Lindsay Muskies and the Burlington Cougars although the Lindsay outfit seems to be an even greater enigma than the Dukes.

So what was the answer to a fantastic Wellington turn around this weekend?

Perhaps it was a week of soul searching in practice that turned the trick.

Or perhaps a heart-to-heart with the higher ups after the close of a forgettable weekend last Sunday.

Whatever the tonic, it needs to be bottled and on hand because the hockey club turned their game around this weekend in two hostile environments, winning back-to-back road games against division foes in the forms of Trenton and Cobourg.

On Friday, Wellington (12-11-3) was able to withstand a glut of Golden Hawk powerplay chances that titled the ice in favour of the hosts and emerge victorious 4-3 in double overtime.

Then, on Monday, Wellington downed the division leaders 4-1 in their rink and gain a very valuable two points.

The fact the Wellington Dukes were able to take two points out of Trenton on Friday night surely has to be some kind of sign from the great beyond that the hockey club is at least equal to the sum of its parts.

Once it was clear what type of adversity Wellington was facing on Friday night in the Golden Hawk’s nest where many leather lunged amateur officials were calling the game along with the Ontario Hockey Association officiating staff, it would have been completely plausible for the Dukes to let the game slip away and chalk it up to ‘other’ factors getting in the way.

But the team didn’t.

They didn’t stop in the first period when the club was forced to kill off five Trenton powerplays including a lengthy five-on-three man advantage.

Despite spending most of the period in the penalty box, Wellington escaped the first frame with a 1-0 lead thanks to Andrew Rinaldi’s goal just 44 seconds into the match.

Wellington did lose Elijah Gonsalves after he flipped the puck out of the rink’s playing surface and the club’s top trio was down a player.

They didn’t stop in the second when it was more marching to the sin bin for Wellington and the club took three straight minors while the hosts played an apparent clean period.

Dylan Massie beat Anand Oberoi at the 11:27 mark to make it a 2-0 advantage for Wellington.

Trenton finally got on the board with a Tiger McDonald effort at 13:03 but any momentum gained by the hosts was sapped just over a minute later when Ben Woodhouse spotted Frank Vitucci at 14:11 to temporarily restore the Wellington two goal spread. 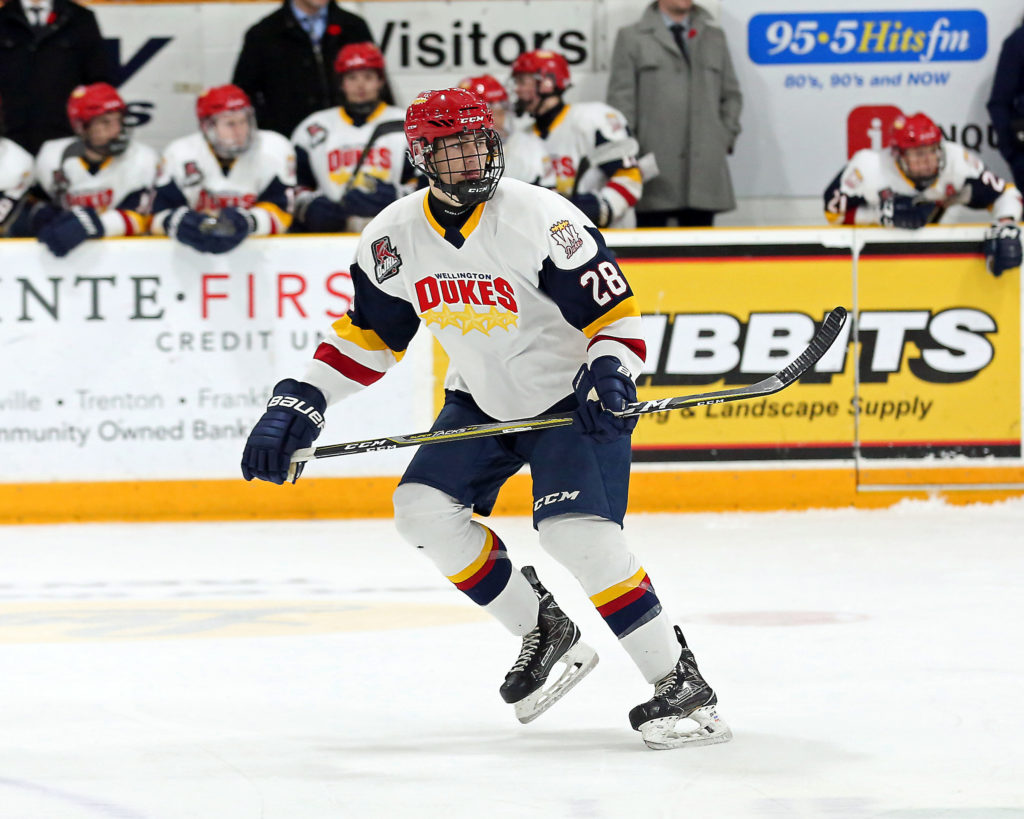 The Dukes and their penalty killing scheme was sound all game but they eventually relented at the close of the period as Trenton’s Cameron Gaylor beat Wellington’s Olivier Lafreniere with a powerplay blast at 17:44.

Of note in the second, Rinaldi was whistled for an equipment infraction, one of five helmet-related misconducts issued in the contest.

With the powerplays benefitting the host Golden Hawks 8-to-1 to start the third period, one would have rightfully suspected those numbers to somewhat even out in the final stanza.

Trenton would get an equalizer in the early going as Brad Lindsay scored 44 seconds in to make it a 3-3 game.

Wellington would get a couple of powerplay chances in the third but neither team was able to score.

Amazingly, Wellington skaters Tyson Gilmour and Woodhouse each picked up gross misconducts for helmet removal in the final period.

Appropriately, it was a penalty that helped decide the game as Dylan McMahon’s stick clipped a Wellington skater near the end of the first overtime.

Early in the second extra frame while enjoying a 4-on-3 man advantage, it was Wellington’s Vitucci ending the contest in favour of the visitors and sending the contingent of travelling Dukes fans home happy.

On Monday, Wellington played about as perfect a road game as possible en route to a 4-1 win in Cobourg.

Without the services of Woodhouse, Gonsalves, and Gilmour (the latter pair making up Wellington’s top line with Rinaldi) due to one game suspensions, the Dukes called upon Matt Poole and Landon McLellan of the Picton Pirates as reinforcements.

McLellan,17, is a Shannonville native that has nearly been a point-per-game player for Picton and the winger picked up his first OJHL point early as he setup Massie for a goal at 5:55 of the first.

In the second, Madoka Suzuki came back to haunt his former club once again, scoring what would be the eventual game winner at the 8:16 mark of the second.

Cobourg’s Jacob Breckles would cut the Cougar deficit in half at 12:43 and the game remained at 2-1 deep into the third.

Finally, Wellington put the contest away as Massie was set up by Zach Nelson and Vitucci at 17:57.

Suzuki added his second into a yawning Cobourg cage at at 18:25 to seal the scoring at 4-1.

Rinaldi picked up his second helper of the game on the empty net effort.

The Dukes look to make it three in a row when they travel to Whitby on Saturday for a 12:30 p.m. Game, their lone contest of the weekend

The Dukes are back home to face the mighty Lindsay Muskies on Friday, Nov. 23.

Leads at Lehigh: Wellington picked up defenceman Joe Roy from the Whitby Fury earlier the the week and sent winger Dalton Bancroft to the Golden Hawks just hours prior to Friday’s game. Roy, a Stirling native, played 49 games for the Fury last season, scoring once and adding a dozen helpers. In Bancroft’s time in Wellington, the Centre Hastings native had two goals and four assists in 18 contests. Neither player factored into Friday’s game offensively…Still on the shelf with an apparent wrist injury, Zach Uens was one of four OJHL skaters to show up on the National Hockey League’s Central Scouting Draft Watch List. Uens in graded in the C skaters group and is projected to as a possible fourth, fifth or sixth round selection at the 2019 Entry draft.