Remembering - Members of the 1st Consecon Beavers, a group created just two months ago, were part of the crowd attending the Remembrance Day ceremony in Consecon on Sunday. (Terry McNamee/For The Gazette)

More people on hand in hamlet to mark Armistice centenary

This past Sunday marked 100 years since the signing of the Armistice on Nov. 11, 2018, that stopped what was supposed to be the war to end all wars.

There are no Canadian veterans remaining from that first World War, and those remaining from the second war are all in their late 80s and older. Canadians who fought in Korea or with American forces in Vietnam also are growing old. However, with ongoing conflicts in Europe, the Middle East, Asia and Africa, there is no shortage of younger veterans and wartime casualties to be remembered.

On Sunday, a large crowd of people gathered at the Consecon cenotaph to remember those who lost their lives in battle and those who fought for Canada in the First World War and all the wars that came after. 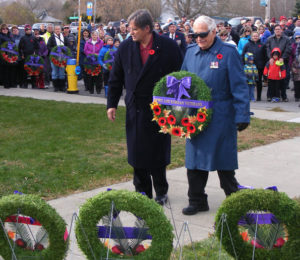 A sign of respect – Rick and Joe Reid laid a wreath on behalf of Second World War and Korean War veterans at a well-attended ceremony at the Consecon cenotaph Sunday morning. (Terry McNamee/For The Gazette)

The event was hosted by the Consecon branch of the Royal Canadian Legion. Branch president Alistair Stark said the crowd this year was bigger than usual, partly because of the sunny weather but also because of the significance of the anniversary.

“It’s very nice,” Stark said. “Since it’s the hundredth anniversary of the Armistice, people made a special effort.”

People of all ages came to the event, with many bringing children and grandchildren. During the event, the quiet was unbroken. Even toddlers and babies remained silent. Few children fidgeted, apparently aware of the importance of the occasion, and several youngsters helped lay wreaths at the cenotaph. Also attending was a large group of service men and women from 8 Wing in Trenton.

As always, the first memorial was a white cross representing the Silver Cross mothers, laid this year by Audrey Sheath. Each year’s Silver Cross mother is chosen by the Legion to represent all the mothers who have lost children in the service of their country.

The ceremony was preceded by a service at Consecon United Church and was followed by a luncheon in the Legion. At 4 p.m., people whose family members had served during the First World War rang the church bells during a Bells of Freedom service in recognition of the hundredth anniversary of the Armistice.