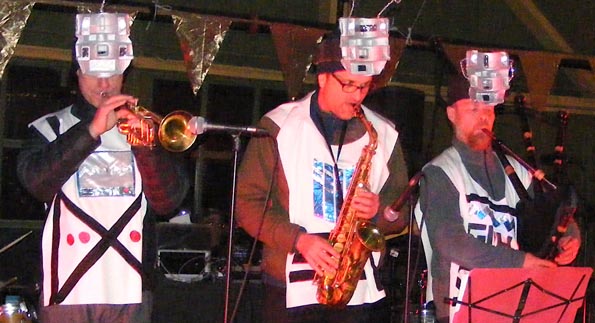 Once at the palace, they met up with a big crowd of people who skipped the chilly walk but showed up for the indoor party.

“This is our sixth year,” said Susanne Larner, of Picton, co-organizer of the event with fellow Picton resident Krista Dalby. “Every year, we’re bigger and bigger. The last few years, we’ve been at capacity.” 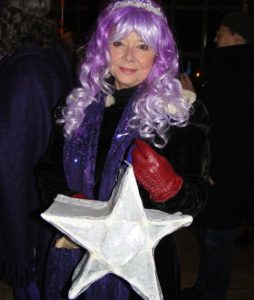 Starstruck – Nancy Mast of Picton brought her own hand-made lantern to the Firelight Lantern Festival Saturday. (Terry McNamee/For The Gazette)

“We have workshops for a couple of months ahead to teach people how to make lanterns,” she said.

People also could buy hand-made lanterns during the event at the Crystal Palace. Among the volunteers helping with the sale table were Tamara Segal and her husband, Chris Burne, of Sophiasburgh.

“We’ve been working with the Lantern Festival pretty much since it started,” Segal said. “We make and sell them at the park, and then bring them here.”

Proceeds from the sale of the lanterns support the cost of putting on the festival. People of all ages came out, most with their own homemade lanterns. Music was provided by the band Guh, who were in costume for the event.

“We have a different band every year,” Larner said. “At the park, we have the community band.”

The annual shadow-puppet play, always a hit with the kids, was back, and stilt-walker Milé Murtanovski made his way through the crowd while having the best view of all the activities. Refreshments were provided by the Vic Cafe, a longtime sponsor of the festival.

This year’s Lantern Festival had a ”Space” theme, so many participants wore costumes representing aliens and space travellers. Larner was in a lit-up space suit, and the Keelan-Bishop family from Carrying Place carried lanterns representing rocket ships, complete with orange crepe paper “fire”. Many, like Adam Dickie of Milford, said they try to attend every year.

“It was too cold for the parade tonight,” he said, but he and his 3-year-old son Max were at the palace, and while they didn’t have a lantern this year, Max wore a string of twinkling lights. Anyone who would like to help out at next year’s event can find contact information on Facebook by searching the Firelight Lantern Festival.