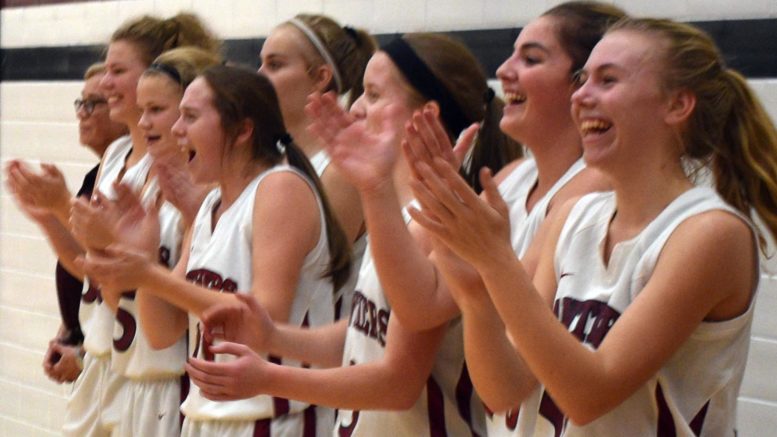 London is calling the PECI Senior Basketball Panthers after they turned in two complete efforts at home Thursday to earn their second COSSA regional championship in three years.

The Panthers defeated the Adam Scott Lions 51-29 in the morning’s semifinal, the halted the Holy Cross Hurricanes 64-45 in the  final to book tickets for the OFSAA AA provincials in southwestern Ontario.

“It feels amazing, said Madalynn Snider, one of the Panthers’ energetic leaders. “At the beginning of the season, we weren’t that strong — we didn’t even play as a team. We played as individual players. In these last games, everyone contributed. Everyone was working to get the scores we got.”

Snider said the Panthers are “very excited” for the new experience ahead.

“I can’t even imagine what it’s going to be like,” she said.

Playing on the provincial stage will demand a high level of energy and execution, but it’s hard to bet against a team that has proven again and again it can rise to the occasion. Thursday provided another convincing example, albeit the Panthers were a tad slow out of the gate to start the day.

Before a packed gym, the Lions got some easy looks to build a five-point first quarter edge as the home side only had two shots from the field fall. Snider said it was a huge moment to adapt to.

“They could shoot. We had to change the way we played our defence to just get a hand in their face and play smarter,” she said. “There was a lot of pressure on us because we had won in the past. It was something that was nerve-wracking.” 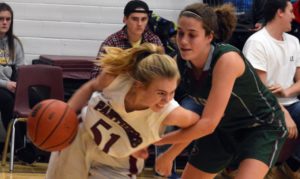 Grinding it out – Vanessa Wilton battles to bring the ball up court against Holy Cross Hurricanes defender Abby Hiltz. The Grade 9 guard had 14 points in the final, showing great poise and skill. (Adam Bramburger/Gazette staff)

In a second quarter reminiscent of the Bay of Quinte Conference championship, the Panthers found their confidence, turned it around, and brought life to the gym. Powered by five three-pointers, they put up 27 points in that quarter alone — matching the Lions’ output the rest of the game.

“You need to remember this is the first time the girls played in that atmosphere,” coach Rob Garden said. “Once we got in the groove and shots started to fall, it was almost like an avalanche. They just couldn’t be stopped.”

Mikayla Leavitt led the way with 14 points. Wilton had nine and Sydney Davies seven. Rachel Brannan was the top scorer for Adam Scott with nine.

The Hurricanes brought an aggressive, tight-checking defence to the court in the final. The two teams played a hard back-and-forth game early, but this time the Panthers didn’t have any jitters. They made the most of their chances scoring 24 points to Holy Cross’ 14. Garden said his team was brimming with confidence.

“That first quarter was a huge lift. They showed up with 24 points and showed zero nerve. They got a lot of energy from the fans. The place was rocking. That gave us so much confidence going forward, we never looked back.”

Snider agreed with that assessment.

“It’s the energy on the bench and the energy in the crowd. Everyone was cheering. It got us motivated. It got us happy and excited, so we kept working and working. We could feel that adrenaline.”

The Panthers coaches also made a smart decision to make sure all of their girls could grasp a bit of that momentum and contribute. They cycled players on and off the court early and often, putting fresh legs on every three or four minutes. The eight players who found the score sheet all put up points in that heavy first quarter.

“We talked all year that you can’t play six or seven players. We’ve been slowly building all year to make sure we could play nine or 10. In each game, we rolled everybody. We played all 12 players,” Garden said. “To Holy Cross’ credit, they played well, but they didn’t have the same energy we had at the end of the game. Basketball’s a long game and you can stay with a team for the first half… but our energy and conditioning was a big factor.”

A year ago, Garden said that may have cost the Panthers a trip to OFSAA, so it was key. 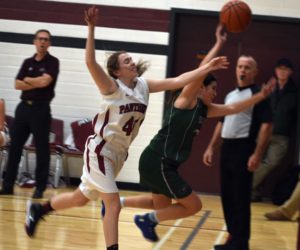 The fresh legs off the bench led to points off turnovers on the rush. Leavitt and Jessie Swackhammer, as always, were among the more opportunistic players. They each scored 14 points. Right there alongside them, however, was Wilton. She dribbled her way through the defence to match that total in the biggest game of her first year of high school basketball, drawing appreciative roars from the crowd with every second half break.

“In Grade 9, she could start on any high school senior team, but what a luxury for us to bring her off the bench,” Garden said. “She’s fearless, she’s athletic and she’s got such a sense of confidence to be 14 years old and be in a COSSA senior final with no nerves. She’s phenomenal at her age. I’m really proud of how she did as an individual, but also how these girls brought her into the fold. She’s not just a Grade 9 on a senior team. She’s a full-fledged teammate.”

Wilton said she initially had doubts about moving to senior, but found it a comfortable fit with a great group of girls. As for their big day Thursday, she acted like it was just another day at the office.

“We knew before we had a lot of confidence and spirit, our team works so well together. We just played the game. We played basketball, the game we knew how to play.”

Her cool effort under pressure underscored the value of scoring depth — and Garden said this team scores as much as any he’s seen.

The coach was also impressed with the Panthers’ consistency in outscoring the Hurricanes in all four quarters.

A team that has embraced an underdog role all year, the Panthers likely could find themselves in that position again in London. Coming from a rural area in eastern Ontario in a league of smaller schools, it is likely the Panthers will receive a lower seed in the tournament. Garden said he’s fine with that position, noting it’s sweeter to win games you’re not expected to win. With what he’s seen, he’s not willing to bet against his players. 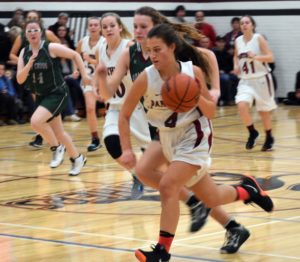 “They’ve just improved, they understand their game and if they play their game, they’re going to be good. It’s an up-tempo, in-your-face, ‘We’re going to come after you” team,’ he said. “(At OFSAA) it’s just a basketball game. I give full credit to the group that went two years ago, they wanted to go and win. We’ve set our sights on getting another win. This group — with their mental fortitude and toughness — I wouldn’t care what seed we got, I’d want to go and play any team that wants to come up against us.

“I’m OK with the underdog role. It suits their personalities. They’re fighters. They’re not going to be intimidated by anybody. Let’s go, tip it off, and see what happens.”

Snider said the team will leave Wednesday guided by the same motivation that’s brought them this far.

Regardless of what happens in the Forest City, Thursday was a banner day for PECI basketball.

“When you look across the gym, you’ve got old coaches like Bill (Latchford) and Mike (Chalmers) here, old principals like Larry Richardson, business people and community members, students, alumni — It’s a proud moment. This is what we’ve been building. It’s more than just basketball, it’s this idea of a program and a family. These girls really felt that support and recognized who they were playing in front of.”

With expenses piling up to represent the county in such a tournament, the Panthers are hoping to tap into the strong, consistent support base once more. Anyone in the community who can offer funds to help offset the Panthers’ travel costs and entry fees are encouraged to contact Garden at rgarden@hpedsb.on.ca or bring a cheque to the school made out to PECI Basketball.

Information about the tournament can be found at www.ofsaa.on.ca/girls-aa-basketball. 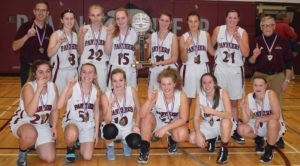