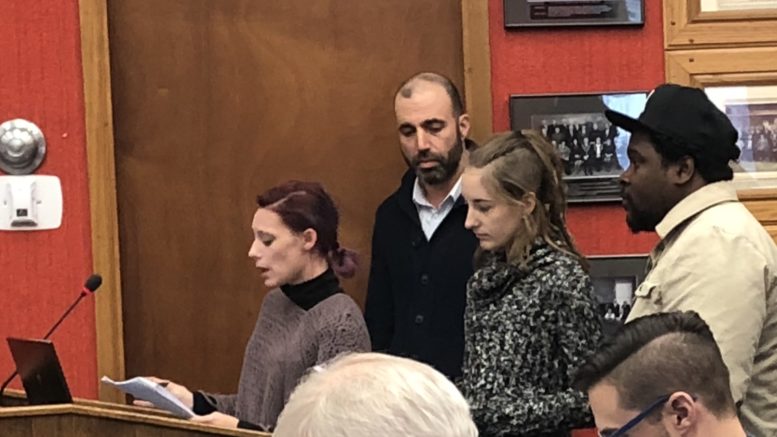 Young adults in the Picton community have lent their voices to roadside safety issues in and around Macaulay Village.

A group of Prince Edward Learning Centre students provided a deputation to the Committee of the whole on Thursday outlining their worries for pedestrians that attempt to traverse Church street/County Road 22 (Also known as Army Camp Hill) as well as parts of Pitt St. And London Ave.

The handful of students called on council to meet with Macaulay Village residents in a public forum to help better understand the concerns residents have as well as potentially convey solutions.

The deputation was the fruit of Municipal Mondays, a civic engagement initiative orchestrated by PELC where the adult education organization hosted candidates running in the 2018 municipal election.

Programming lead Jonah Schein told council at the outset of the deputation that at the conclusion of the program was the issue facing Macaulay Village residents was a concern that stood out amongst the students.

The group of deputants told council that the London Avenue access point at Macaulay Village was not safe for pedestrians or cyclists and they feel that their community’s safety, dignity, respect, and accessibility are at jeopardy without adequate sidewalks, lighting, signage or speed limits at the top of the incline on Church St.

The students said as recently as April 2018, an 11-year-old boy was struck by a motorcycle and everyday that passes is another day when our community members are at risk.

“There’s an alternative route to the main road; it’s down the mountain and through the park, but it’s equally dangerous. It’s unmaintained, therefore it’s dark, slippery, impossible to push a wheelchair or a stroller, and it feels particularly unsafe for women,” PELC Jerri Lynne Ostroskie said.”We all deserve to be safe. No one should be forced to stay home or pay expensive transportation costs because it is unsafe to walk downtown from The Heights.”

Isolation and lack of access to resources that others might take for granted is another issue for pedestrians travelling to downtown from Macaulay Village.

Student Terry St. Rose said residents want safe access to Picton and resources that cannot be sourced in the community.

“In our neighbourhood there are no stores, no library, no schools, no services, no resources. There are so many reasons why we need to be able to access Picton safely,” St. Rose said.

“This is urgent. We need to see action and immediate steps taken to protect our community. This means sidewalks equipped with street lights, proper signage, and appropriate speed limits. An addition of bike lanes would increase the safety of our cycling community members even further,” student Cynara Lewis added. “The voices that are being expressed here today need to be heard. We deserve to be listened to. Our safety is our right, not a privilege.”

Ostroskie said the group was concerned as to why real steps have not already been taken to address this issue.

While they’ve heard many promises of action, the community can’t wait any longer for answers.

“We need our thoughts and experiences surrounding the lack of pedestrian safety to be valued, and acted upon. We need a commitment from council to create a plan that protects our community,” Lewis said. “We encourage you to do a safety audit of our community. Come out and walk in our shoes so that you can experience the unsafe conditions that we face every time we need to access needed resources in our community. See for yourself what it is like to push a stroller, or a wheelchair, to get groceries, or to come home from school at night after extracurricular activities.”

The group also encouraged outreach by council to those living in the community invited the members of the horseshoe to “hold a meeting at the top of the hill” to discuss concerns with the members of our community and with people who don’t feel like Shire Hall is accessible.

A number of council members appreciated the deputation and the concern the students demonstrated on Thursday including Prince Edward County Mayor Robert Quaiff who wanted the group to know the lack of lighting and sidewalks in the discussed area was concern for him as well.

“I fully expected to have completed the sidewalk and the lighting project completed by now,” Quaiff said.

The mayor stated further the municipality received an increase in grant funding to extend the water service going to Macaulay Village and it was necessary to re-tender the project as the pathway and lighting components were part of water line project.

Commissioner of engineering, development and works Robert McAuley confirmed the community improvements are bundled with a water feed line that’s going up the road to the Macaulay Village reservoir.

“Additional funding is being looked in the upcoming budget and, if it’s approved, it would be issued early in the new year,” McAuley said.