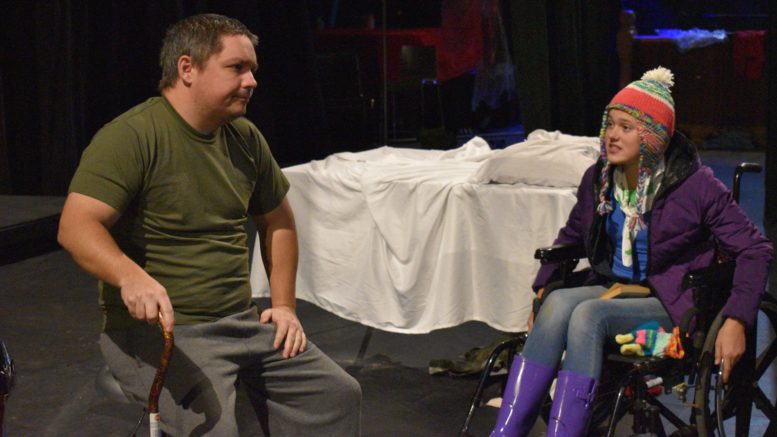 For any theatrical production, authenticity is the key to a successful performance.

Place actors that can get inside their character’s mind set and and have lived similar experiences and it creates a recipe for a successful show.

Governor General’s Award-winning playwright Colleen Murphy’s two-hander is a story that involves a veteran named Michael who is recovering in a veteran’s hospital after suffering a battlefield injury and is dealing with both the physical pain and psychological trauma of his experience.

Enter Halley Armstrong, an overly spirited Girl Guide Pathfinder who shares Michael’s namesake and wants to read to the combat veteran in order to earn a badge.

What starts as an awkward, odd couple pairing transforms slowly into a friendship where deep and dark subject matter is traversed and heroism and courage are redefined.

Director and Shatterbox founder Georgia Papanicolaou told the Gazette she is very pleased with the casting of this production that runs this weekend at Picton’s Regent Theatre.

“It’s uncanny that an actual Girl Guide Pathfinder and a Canadian Forces member came out, auditioned and cast in a production where the roles are exactly that,” Papanicolaou said. “It’s a fictional story but there’s a layer of realism to this production.”

Austin, a Canadian Forces member for 18 years of service, was medically discharged from then military after suffering the same injury as his character.

An experienced performer, Austin was part of a production of One Flew Over the Cuckoo’s Nest that Papanicolaou was a part of.

“I never pre cast, but I was so happy when he auditioned,” the director said. “Sometimes you just know when the fit is right, it’s quite an emotional ride for him and will be for the audience.”

Starring opposite Austin in the role of Halley is Alice Graham, the walking and talking definition of up-and-coming actor.

A product of the Marysburgh Mummer’s Young Mummers program as well as other youth theatre programs, Graham was labeled as a phenomenal force by Papanicolaou.

“Her audition felt so real and wonderful,” the director added. “The second she stepped up and said ‘Hello, my name is Halley Armstrong and I’m a Pathfinder’ we just knew she was the character.”

In between rehearsals this week, Graham told the Gazette that table reads prior with the cast and crew helped her identify how Halley might react and feel to various situations and subject matter.

“Halley is so determined and while she might have second thoughts about things that come up, you can tell nothing will get in her way,” Graham said.

In order to get into the mindset of Austin’s character Michael, the actor said he forced himself to return to “Soldier mode.”

“I had to rewind it and get back into soldier mode which was something I hadn’t done for a couple of years,” Austin said.”Like the character, I’ve been to Afghanistan and there’s a certain mentality of staying alert when you are over there. I have experiences with PTSD like he has and I’ve lost friends over there. Ironically, we both had the exact same injury and it’s the one that got me medically released from the military.”

Papanicolaou said Shatterbox likes to bring Shatterbox Theatres like to bring different kinds of productions to Prince Edward County that other companies don’t.

She said shows that create conversation or dialogue or feature real stories and drive discussions are important.

“We chose this month to present Armstrong’s War for obvious reasons but also to reinforce the idea that Remembrance Day is for all veterans who served in places like Afghanistan, Bosnia and Rwanda,” she added.

“I think people started to realize more and more as Canadians were coming home in coffins that we were in war that Canada would take a lead role in and it’s important to remember that. I know there are varying degrees of opinions when it comes to war but for me, it’s so important to get the message out that, as a soldier, in his mind he’s over there to protect people. He doesn’t get involved in the political aspect, they are over there to do a job for their country,” Austin said.

“We are a not-for-profit company anyway but this building is so important to so many community groups, artists and performers,” Papanicolaou said. We need to ensure its vitality for future generations.”