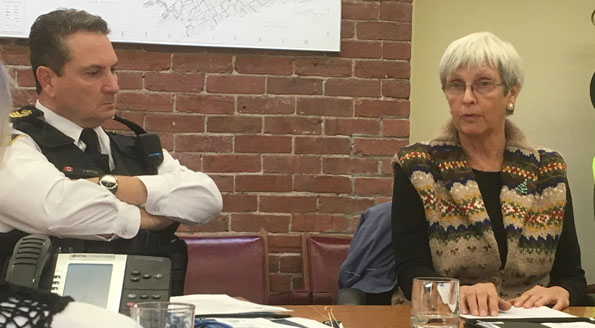 County’s police services board updated on Proceeds of Crime deliverables

The County’s police services board received an update Monday on how $54,960 in grant funding from the Ministry of Community Safety and Correctional Services will be spent.

Ann McIntosh, a co-ordinator with The County Foundation overseeing a project called “A Collaborative Approach to Mental Health in Prince Edward County” said there will be three deliverables for the Proceeds of Crime money, which will come in four separate payments between now and April 2020.

The first is the formation of a core advisory team that brings together at least 14 agencies across the health care, social services, and justice fields for regular meetings.Their first session is Nov. 29.

“It’s an open call. One of the aspects is to see who isn’t there that should be,” she said. “That first meeting is a planning meeting.”

The second deliverable is a series of training for first responders and human services staff. A central element is a “lunch and learn” series at the Picton fire hall, with a pilot session between December and April.

“I’m very keen on this. It’s one of the most cost-effective things we can do,” McIntosh said. “We can try to do this on a shoestring budget. The fire department are letting us use their training room. We’re working on a budget for food. The training is free. We’re hoping to do it for 25-30 people.”

The OPP selected five preliminary sessions based on a list provided by Addictions and Mental Health Services. The sessions will include post-traumatic stress disorder, both for self and co-workers and on service calls, opioid use disorders, mood disorders, and psychotic disorders.

“We hope to keep the calibre of speakers top notch with a 30-minute presentation, 20 minutes of question-ad-answer, and some networking. I’d like to have referral agencies there as well.”

Ideally, McIntosh said she’d like to develop modules that can be used again in the future. Further training will be arranged in 2019 with Community Living Prince Edward (CLPE) partnering on crisis prevention and intervention, the Hastings and Prince Edward District School Board assisting with therapeutic crisis intervention, and the Military Family Resource Centre partnering for “Mental Health First Aid.”

The final deliverable, she said, will be a public awareness event that will connect the public to support agencies. McIntosh is examining the idea of a partnership with CLPE, which hosts a wellness fair every two years.

Chair Marg Werkhoven said this grant is the second time the board has been successful in receiving Proceeds of Crime funding. In 2015-2016 it received $66,318 in partnership with the John Howard Society, Canadian Mental Health Association and Recreation Outreach Centre. Some of that funding was used to develop the municipality’s community safety and wellbeing plan.