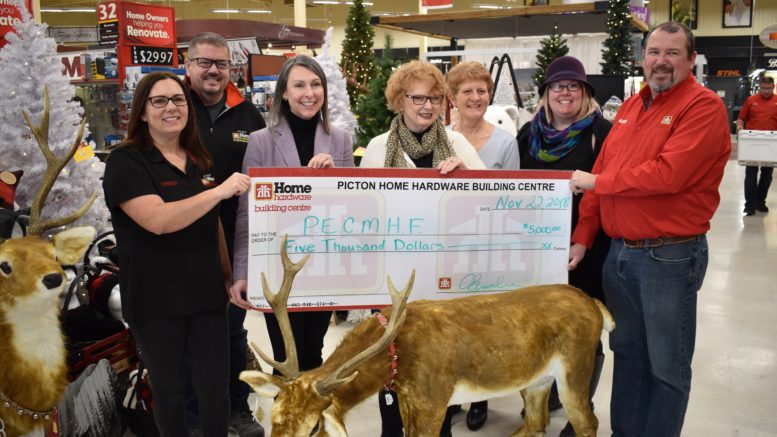 HOME OWNERS HELP HOSPITAL- Picton Home Hardware made a $5,000 contribution to the PECMHF Back the Build Campaign at the store on Thursday. Pictured at the cheque presentation are (From Left): Chrissy and Adam Busscher of Picton Home Hardware, Shannon Coull, executive director of the PECMH Foundation, Barbara McConnell, vice chair of the Foundation, Marthe Robertson, Back the Build’s campaign manager, Briar Boyce, communications and donations co-ordinator for the Foundation and Mark Busscher of Home Hardware. (Jason Parks/Gazette Staff)

Help is always close to Home when it comes to our Prince Edward County Memorial Hospital.

These funds were raised at the Picton store’s recent customer appreciation evening held Oct.25 where 210 ticket holders were privy to in-store specials, games and snacks all provided by Home Hardware.

Over $2,400 was raised from the ticket sales and a raffle that was directed to the Back the Build campaign and customers Sheila Brushey and Paul Vidito helped make it an extra special night for the Foundation as they graciously donated their winnings back to Home Hardware to be put towards the Back the Build contribution.

The remainder of the funds received by the Foundation on Thursday were collected at recent electronics recycling events held in the store’s parking lot.

The Busscher family extend thanks to e-waste co-ordinator Linda Ryan who organizes the recycling events held at Home Hardware.

Picton Home Hardware has now given $9,305 toward the Back the Build Campaign and their overall giving total to the PECMH Foundation since 2010 is $36,226.99.

“The Foundation is so grateful and they are a great supporter and it’s wonderful to see the proceeds form the community,” said Foundation Vice Chair Barbara McConnell. “As the first corporate contributes to our Back-the-Build campaign, Picton Home Hardware has a very special place in our hearts.”

In total, the Foundation has raised $10.4 million of its $16 million goal as the community’s contribution to the redevelopment of PECMH and Foundation Executive Director Shannon Coull said community-minded donations, bequests and other commitments are edging the new hospital to the goal inch-by-inch.

“Home Hardware’s gift helps get us closer to our goal – a new hospital,” said Coull. “The proposal for the new hospital will have the same services, in a better space. It will have the highest standards of infection control. Every inpatient room will have a private washroom. The Emergency Department will include more private and flexible facilities. It will be built to handle everything from fish hooks to cardiac events. We are proud of Picton Home Hardware’s efforts to help us Back the Build. They were the first business to publicly commit to raising funds for the proposed redevelopment of our hospital and have proven themselves to be true philanthropic leaders in our community. We are so grateful to have the Busscher family and Home Hardware’s dedicated and loyal staff supporting our hospital.”

In total, the campaign seeks funds for the build ($12.7 million) as well as outfitting the redeveloped facility with new equipment that will replace medical capital expenditures that are either to old or can’t be removed from the current facility.

The cost of medical equipment is expected to be around $3 million.

Reaching the campaign goal years prior to the estimated project completion date of 2025 will send a message to the Ministry of Health and Longterm Care that this community is ready for a new hospital.