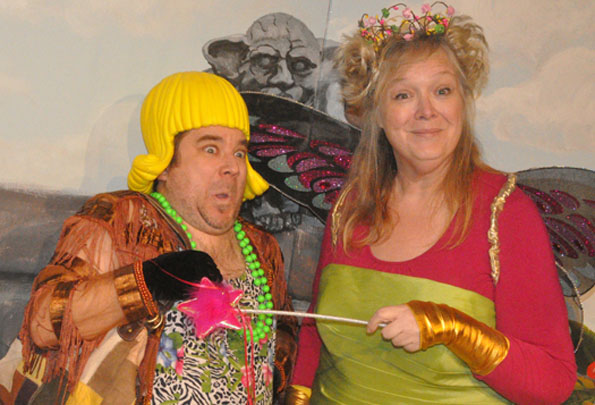 If you happen upon Mt. Tabor Playhouse in Milford over the next four days, you might find yourself singing “Hi ho, hi ho, that’s not quite the show I know.”

You might also find yourself laughing hysterically after viewing the Marysburgh Mummers’ performance of Snow White: The Panto. While child friendly, the telling of the classic Brothers Grimm and Disney fairy tale follows a bit of a different format, one the community theatre troupe hasn’t offered in over a decade.

“It’s the first time in a long time,” said director Kyle Watson, who recalls staging Cinderella in a similar style 12 years back and the English tale Dick Whittington and His Cat not long after.

Panto, short for pantomime, can become a bit zany on stage.

“It’s a traditional British form of theatre traditionally put on around Christmas time,” Watson said. “It’s a big family event to go and see the annual pinto. It’s generally based on fairy tales with familiar stories. It’s filled with really broad characters, bad silly jokes and music. There’s always a dame — in this show, I’m playing the dame. There’s usually at least one guy in a dress, that sort of thing.”

The style allows for quick wit and plenty of audience interaction, which Watson said is actually ideal not only for children in the audience, but also in the cast, a Mummers tradition and, usually, a guaranteed gate success.

“Theatre with kids in the show puts a lot of bums in the seats,” he added.

For Snow White, there is a nice mix of theatrical veterans and about a half-dozen performers who are getting their first taste of life on the wooden boards. Cast members range from 6 to about 66.

Among the veteran performers, there’s some well-known locals involved. Cheryl Singer plays a delightfully wicked queen and sops up boos from her audience — which are very much encouraged. Ruth Laliberte brings a youthful exuberance to the role of her nemesis, Snow White. The venerable Don Watson plays the role of Chuckles, her henchman. Watson, the dame, and Lori Farrington, the fairy offer experience and good timing, while Quinn Bennett steps into the role as Prince Charming. A talented collection of performers contribute to various choruses and gags.

The director was particularly pleased with the young talents that auditioned.

“This is a really good group of kids. We’ve done shows like this a few times and this particular gang seemed to have really picked up on their dialogue and blocking.”

Ultimately, Watson says they portray a familiar story but there are added nuances.

“There’s no twists in the general story, but there are characters exclusive to this panto you wouldn’t know from the regular Snow White story,” he said. “There’s fun for the whole family. There’s going to be political humour and local humour the adults are certainly going to get and classic gags that adults will enjoy as well.”

Watson added he and the cast members are still rewriting dialogue this week to add in some new jokes and ideas. No doubt, the content has come a long way from when he and Farrington picked the Norm Robbins script a year ago and even from when the rehearsals started in September.

A treat for this particular show is the addition of a talented five-piece band, led by musical director Annalise Norohna. They do a great job setting the mood and interacting with their audience. Watson said this is the first Mummers pantomime that has included that musical element.

“It’s something that’s been missing for us,” he said, adding there aren’t a lot of long musical numbers but, rather, shorter segments to stimulate those with shorter attention spans.

Ultimately, Watson said he hopes the production will light a similar spark in young audience members as his first panto experience did for him when he was 8 or 9.

“I would hope that any little kid that comes to see the show will end up leaving with maybe that spark that turns into a lifelong love of theatre… It has stayed with me for over 30 years.”

Tickets are $15, available at the door or in advance at Books & Company, the Rossmore Stop and Wellington Home Hardware. Shows Thursday through Saturday are at 7 p.m. with a Sunday matinee at 2 p.m.