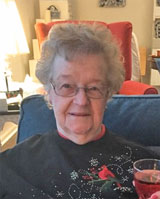 Hazel Deacon was born February 22, 1923 to Kate Holmes and Nelson Struthers, passed peacefully after a brief Hospice care, at her daughters home in Brighton Michigan. She joined her beloved Keith and daughter Dorothy, on November 15, 2018. Keith and Hazel married on October 28, 1978 and celebrated 23 years together before Keith passed in February of 2002. Hazel was the second oldest of 5 brothers and 4 sisters, living on a large farm in Bloomfield, Ontario in her cherished Canada. Hazel was a self-made business person, ahead of her time. After moving to the US she attended college business and financial classes and worked in a variety of retail sales/purchasing and financial institution positions, 33 years later she moved back to Canada and started her own business selling leather goods, shoes and cosmetics. As a people person, with a witty sense of humor, Hazel embraced change in her living and travel destinations. She made 6 places home from Chicago to the suburbs of Detroit and 7 in Ontario and British Columbia, Canada. Travel included most Canadian Provinces, many US States, Mexico and the British Isles. Several of her notable trips were across Canada by RV and car through the Rockies in the winter. Among Hazel’s loves were painting, nature and it’s animals, Bingo, keeping-up with the news and collecting articles from local newspapers about Canada or humor. Her sense for color was passed along to her 2 daughters: one was well known for street-scrape art in Cadillac MI and the other had a successful women’s apparel shop in Brighton MI. Hazel was also notorious for collecting niche-knacks about Canada, nature, and from the places she lived and visited. Hazel had a strong faith and enjoyed reading the Bible and faith based literature. She especially enjoyed the many activities and services at the Picton Salvation Army. Hazel is survived by daughter, Pat (Doug), and 2 grandchildren, Floyd (Christine), Kristy, and 3 great grandchildren, Sydney (Nate), Tex, Madison. She is also survived by her sisters, Priscilla Smith, Katie Dunlop and many nieces and nephews.