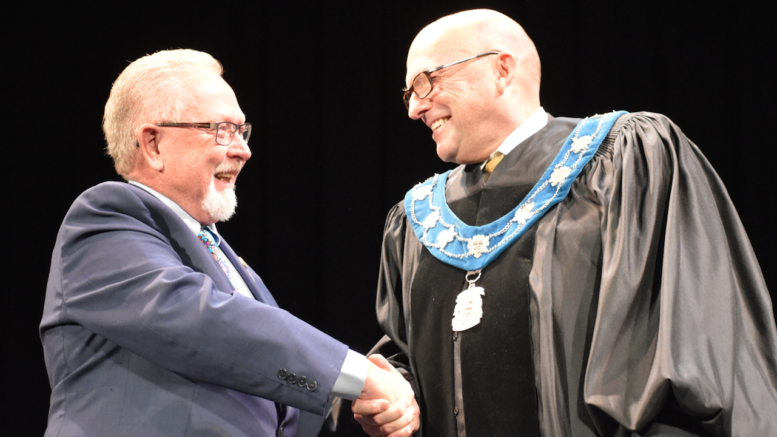 Change has come to Prince Edward County council as nine new faces have assumed positions around the Shire Hall horseshoe.

So it stands to reason that this incoming group of councillors and new Mayor Steve Ferguson would shake things up right away when it came the the inaugural meeting Tuesday night.

Setting past practice aside, the comfy confines of Shire Hall were discarded for one night and a grander stage at the Regent Theatre was chosen as the backdrop for all the ceremonial proceedings and legal oaths of office.

Upwards of 300 people attended and such a capacity would have been impossible for the tiny gallery at the County seat to host everyone that wanted to take part in such a special milestone.

The typical pomp and circumstance with the added spectacle of hosting this term’s inaugural meeting at the Regent coupled with an inspiring address from Mayor Ferguson certainly has the earmarks that this newly invoked form of county government will be different then previous editions.

Whether different equals better one can only suppose at this stage of the term.

But it’s a new day dawning at Shire Hall and, in his inaugural remarks inaugural remarks, Mayor Ferguson called for a galvanization of Prince Edward County and a spirit of collaboration and advocacy that would serve as his personal mantra over the next four years.

“During my campaign, based on the optimism for the future and the ideas I heard from people in every corner of the county, I pledged to do three things – to galvanize participation by the many talented people in this community to help address our challenges; to be a collaborative and action oriented leader; and to be a strong advocate for our municipality with our neighbours, the province and the federal government. Galvanize, collaborate and advocate. This will be my personal mantra going forward.”

In 1905, Ferguson’s great grandfather Mr. W. J. Ferguson, was elected mayor of the city of Stratford, Ont. and Prince Edward County’s mayor drew from words of the past to relate his feelings on being installed to the head of local government.

“The occupancy of this chair, which has come to me through the good will of the electors, I accept with due appreciation and sensibility of its importance and responsibility,” Ferguson said.

“I have, indeed, great pleasure in officially welcoming you, ladies and gentlemen to a seat at the council horseshoe of our municipality. It is an ideal condition of municipal politics when the council is a unit on the purpose to advance the (County’s) interests. I very much look forward to working with all of you in our stewardship of the fiscal, economic and social interests of Prince Edward County,” Ferguson said.

The mayor pointed out that the world was on the cusp of a new decade and the children that started elementary school in September will graduate from PECI in 2030. Those years will go by quickly and Ferguson asked himself what can council do together for that graduating class of 2030?

“What problems will we have addressed and put behind us by then? What opportunities will be there for them in our community?” he wondered. “It’s not that we don’t have ideas about how to meet our challenges of affordable housing, transportation, education or making sure everyone has enough to eat. It’s that often the process hinders debate, resolution and implementation.”

Ferguson pointed to the County Community Foundation who has developed into a collaborative partner with dozens of engaged groups and individuals to look at Prince Edward County’s specific concerns and is dedicated to find ways to work together to address those issues and measure progress.

It’s a model Ferguson wants to emulate to build on. 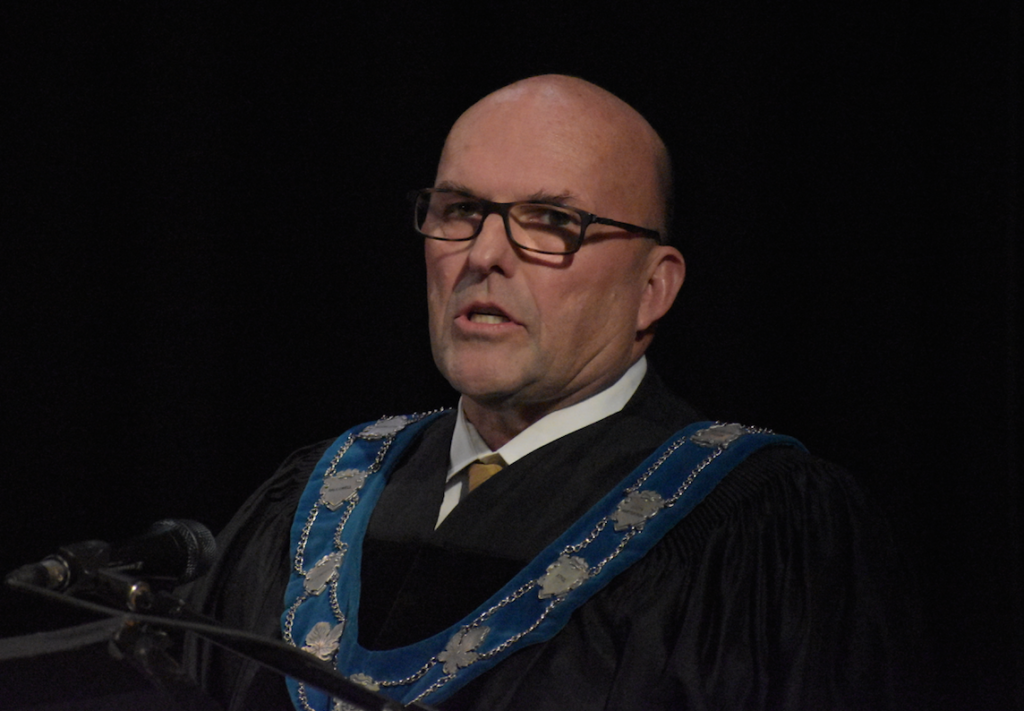 “Council will use that model to create ‘task teams’ and to strengthen advisory committees to address the important issues of our shoreline, water, infrastructure, heritage, and the environment among others,” the mayor said. “All of us are most appreciative of the activities of our social service agencies and service clubs that help those in need. “

A councillor serving South Marysburgh in the preceding term, Ferguson acknowledged council can get overwhelmed with noise and said the group was pledging to do a better job of communicating the facts, the challenges, the issues, so that debates are informed and that municipal government could keep members of the community engaged in the discussion in order to focus on the issues that matter the most.

Ferguson spoke to a more recent effort to revitalize the Millennium Trail.

After it appeared revitalization of the trail would be a non-starter due to sky-high tenders, council agreed to let the trail committee institute and over see the project and early returns indicate the move was a wise one.

“Solutions don’t have to be complex, sometimes we just have to get on with things. Most of you will be familiar with the Millennium Trail – and you may have seen pictures of Barry Davidson and a gang of volunteers working to rebuild part of it, all armed with clippers, rakes, shovels or whatever else they had in their garden shed. They just got on with it and I think they are an inspiring example. We can get things done a little faster,” Ferguson said.

A new day with a new direction in terms of municipal-public engagement seems to be in the offing as the mayor said council and staff must serve as enablers and called for the council and staff to build a reputation as a place where you can get things done quickly and well and thereby contribute to our wonderful community.

“Our council and staff are going to be directed to find more revenue from sources beyond the tax base of our full time and seasonal residents. Whether from other levels of government, our hundreds of thousands of visitors, from investors or generous individuals, we are going to get creative in our advocacy and requests,” Ferguson added. 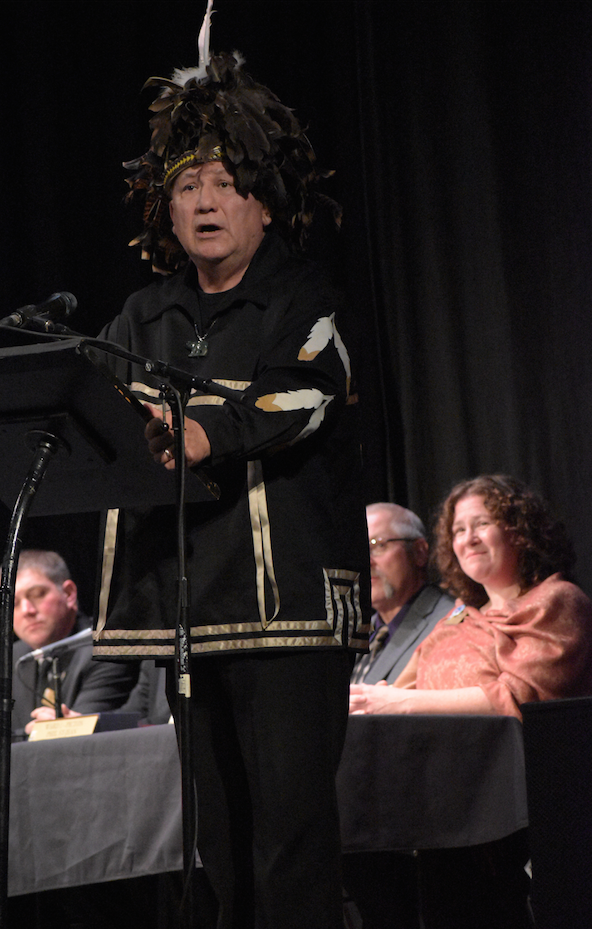 As for a municipal ‘to do’ list, Ferguson pointed to a major hospital building project that should be finished when those FirstGraders are moving into Grade 6 or 7 and an an urgent need to build more houses or apartments that their parents can afford to rent or buy.

“ I’d like to see real progress on that front by the time those kids are in Grade 3 or 4. We have businesses that are short of workers and we have people who need more employment. Together, with the creative talent in this community – indeed, in this room — we can work to resolve both of those issues and will do so on a collaborative basis,” said Ferguson.

In terms of unifying the county, Ferguson called for an end to those ward lines that seemed to dictate the conversation in the early post-amalgamation days and crop up from time to time at both horseshoe and in the coffee shops and other social hang outs and gatherings.

“You voted for change as a county. In my meetings with the individual councillors after the election, we all agreed that the days of ward versus ward, the north versus the south – those days…and those nouns, must be put behind us. We will be focused as a council on the county from coast-to-coast-to-coast-to-coast, as a whole, attending to the needs of our northern, southern, eastern and western residents,” the mayor stated. “The County is more than a brand. We have been entrusted with a remarkable legacy, and a responsibility to make sure that the next decade, the twenties, is a time of building on that legacy, ensuring that for that PECI graduating class, Prince Edward County will be the envy of all the other municipalities in the province.”

Ferguson also committed to being visible and available whether at Shire Hall or throughout the towns, villages and hamlets of the County or the numerous events that take place every weekend.

“It is only by doing so, by listening to people, that one can gauge the measure of one’s success. Although the days of a quick trip to the grocery store are behind me, and (past mayor Robert Quaiff) will understand, chance encounters with residents and business owners are as meaningful to me as I hope they are to those who strike up a conversation in the produce department,” he said.

In his final remarks, Ferguson admitted to being “from away” and settling in Prince Edward county just 30 years ago.

“There are many “from away” who have been attracted to the county and it is my hope that more will come, bringing with them their ability to make some form of contribution. All are welcome. But to all I say this, please be respectful of the people, attractions and special attributes of The County, and of our historical and agricultural heritage that attracted you to it in the first place,” Ferguson said. “We have an extraordinary municipality, unlike any other, and I am excited, motivated, proud and honoured to be your mayor.”

A number of visiting dignitaries blessed, officiated and gave remarks before and after Ferguson’s address. In offering a blessing from the neighbouring Bay of Quinte Mohawks at Tyendinaga, elder David Jock referenced the duty for all humans to live together in a balance of harmony with each other and all living things great and small and asked for a great thanksgiving to the creator of all things great and small.

Transferring between english and traditional Iroquoian Mohawk, Jock asked the audience to remember the preciousness of the gifts that have been given.

“Let us give thanks for something precious — our next breath- and our next clench of the waters so our thirst is met and let us remember these gifts that are very priceless to all, especially the unborn generations,” Jock said. “Remember the sacredness of the waters that we are entrusted with that care and we have the duty for all creation to keep our waters safe and clean for all of life to take.

Justice Ernie Parsons, a former MPP, administered the declaration of office for the councillors and Ferguson and stated that Canadians were blessed to be able to participate freely in municipal governments.

“We are in special place in the world where anyone can believe they have something to contribute to a community and get involved in it. It’s a rare privilege we have in the country,” Parsons said.

In a moment of levity, Parsons added that he was especially happy to receive a call from U.S. Special Counsel Robert Mueller who told the Justice he had found no evidence of Russian collusion in the 2018 municipal election.

Calling it the easiest meeting of the term, Parsons said they wouldn’t all be like this but at some point, there will be a session where the group will make a positive change for local residents.

“There will be evenings where you will leave the council chamber and on the drive home, you will say to yourself that We did something tonight that will make the County a better place to live, to work, to farm, to business,” Parsons said. “You will get a satisfaction out of that will last the rest of your life.”