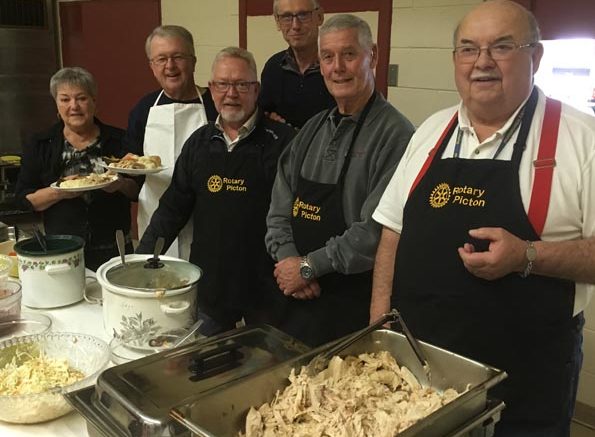 A pair of organizations that dedicate themselves to serving others teamed up last Wednesday to offer up a hot meal.

For a second consecutive year, the Rotary Club of Picton arranged for the purchase, preparation, and serving of the local Salvation Army citadel’s annual Loves and Fishes Dinner.

Rotarian Doug Snider said the club’s members, their spouses, and a number of other volunteers took part in putting the meal together. Their efforts meant there was plenty of food available for the over 110 people who enjoyed a full turkey dinner with all the fixings. The dinner was topped off with an apple crisp dessert donated by Lois Creasy Farms.

This was the 20th year the meal was served by the Picton Salvation Army. Inspired by the Gospel account of Jesus’ feeding 5,000 at a community meal, it also serves as a reminder of the connection between Picton’s own economy and its fishing industry.

Among the servers was Rotarian Robert Quaiff, who made one of his final appearances as mayor. It was his second appearance at the Salvation Army in recent weeks as he also joined Lt. Joseph Ludlow for the Hope in the County Breakfast in early November to kick off the annual Christmas kettle campaign with a goal of raising $50,000. That money helps provide hampers for those in need and emergency services such as food, clothing, and shelter. The Salvation Army supports regularly over 120 people, including 50 families, throughout the year.