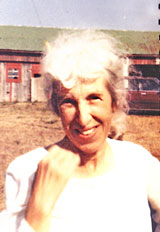 Elizabeth (Charter) Harris Dobie died peacefully in Toronto on Nov. 24, 2018, at age 89, of dementia. Born in Dryden, Ont., and raised in New Jersey, Liz graduated from Manitoba’s United College (now University of Winnipeg) in 1950, and returned to the United States to marry high-school sweetheart Pierson Harris. Following their divorce, she and her four children moved in 1968 from Philadelphia to Picton (her parents, Legrand and Edith Charter, had retired to Waupoos 10 years before). She was a Picton Gazette reporter for several years, and later worked at Prince Edward Heights while raising her family. In 1976 she married her second husband, the late Kirkpatrick Dobie of Picton. Some of Liz’s favourite things were, in no particular order, books, music, campaigning for social justice, dogs, underdogs, astrology, jigsaw puzzles, wildflowers and her many friends. She will be greatly missed by her children David (Peggy), Michael (Marisa), Christopher (Mary) and Bryn (Sandor), grandchildren Mischa, Gabriel, Melina, Sarah and Claire, step-grandchildren Pablo and Alejandro and her nieces and nephews. In addition to her parents, she was predeceased by her sister Doris Goldman of South Marysburgh and Stow, Mass. Family and friends will celebrate Liz’s life in the new year. Donations in her memory can be made to Music at Port Milford or the charity of your choice.