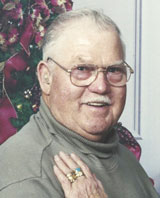 Garnet Wilson Ferguson died at H.J. McFarland Home on Saturday December 8th, 2018. Garnet Ferguson, of Picton, at the age of 92. Beloved husband of the late Madeline. Loved father of Allan Hicks (Marie) of Barrie, Paul (Doug) of Picton, Stephen (Deborah) of Belleville, Cheryal Summers of Picton, David (Debbie) of Alberta, Dale (Lucy) of Ottawa, Colleen of Picton and the late Terry and Wendy. A loving grandfather and great-grandfather, Garnet’s wonderful sense of humour and good nature will be treasured by his children for years to come. He was also known as a good provider for his large family, having worked many years at ESSROC and with HJ McFarland Construction until retirement. The family is thankful for the care and attention he received while at H.J. McFarland Home. A Celebration of Garnet’s life will be held at the Whattam Funeral Home, 33 Main Street, Picton on Saturday, December 15th at 11 a.m. Cremation will follow. If desired, donations to Hospice Prince Edward would be appreciated by the family. www.whattamfuneralhome.com