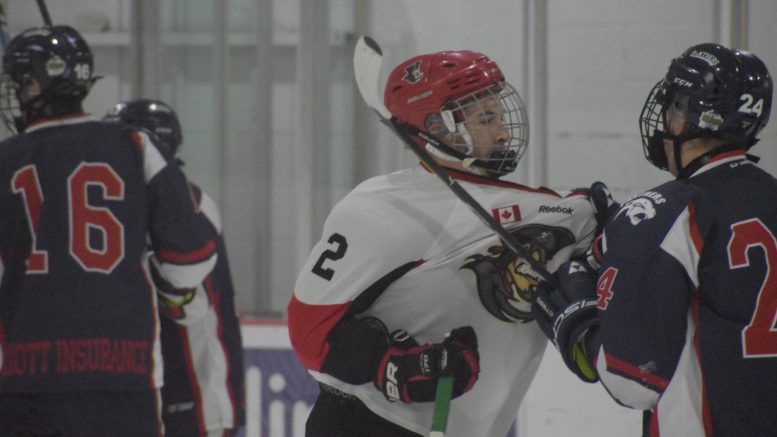 BACK ON THE BLUE- Picton Pirate defenceman Nick Kyte made his return to the lineup Thursday, scoring a game winning goal and mixing it up physically with several Port Hope Panthers. (Jason Parks/Gazette Staff)

It may have tested their collective mettle more than they were expecting but the Picton Pirates were able to collect their two points available to them Thursday night.

In their only action over the weekend, the Pirates shaded the visiting Port Hope Panthers 3-2 Thursday night at Huff Estates Arena.

Eyeing another potential upset after besting the Pirates in Picton 3-2 on Oct. 18, The fifth place Panthers had designs of engineering another road win at the expense of the hosts Thursday by playing tough and keeping the locals to the outside portions of the ice surface.

Picton (17-8-1, 35 points) would wind up outshooting the Panthers by nearly a 2-1 margin but only a seven minute window in the middle part of the second period produced any offence by either team.

Pirates head coach Tyler Green said he would be forgetting about the contest as soon as humanly possible but was happy that his club was able to persevere in the end.

“We picked up the two points but it was not one of our better games,” Green told the Gazette. “We weren’t willing to pay the price and get to the dirty areas where we can produce. That’s a physical and well structured team we played and they don’t give too much away inside the house.”

After a scoreless first, it was Port Hope getting on the board first at the 8:06 mark of the second as Jarrett Desormeaux’s powerplay blast beat Picton starter Kyle McNair for a 1-0 Port Hope lead.

That margin lasted for just over four minutes as the Pirates got the wake up call they severely needed. 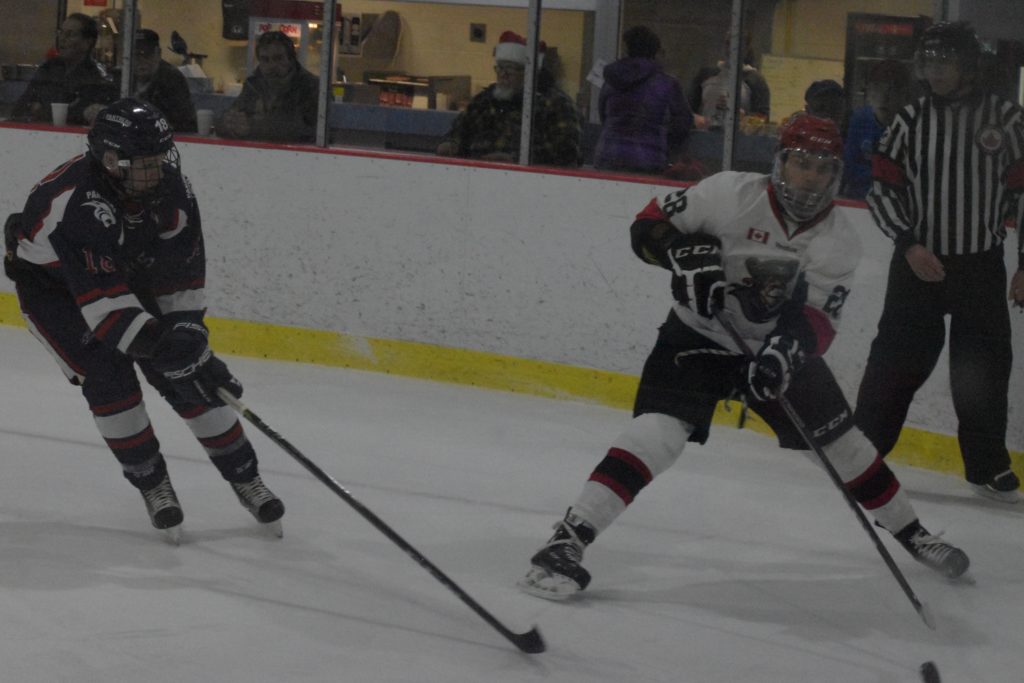 Picton Pirates leading scorer Griffen Conger set up a pair of tallies 20 seconds apart to his his team the lead midway through the second period Thursday night. (Jason Parks/Gazette Staff)

“There was some big hits, some late hits and a goal against and  I think it served as a wake up call on our bench that we could be in danger of letting another one slip away,” Green explained.

Picton’s leading scorer Griffen Conger would set up Noah Brant at 12:30 to make it 1-1.

Just 20 seconds later and enjoying a powerplay, Conger and Kurtis wood played pitch and catch and eventually fed Devin Morrison who put the Pirates ahead 2-1.

Just over a minute after the captain’s 12th of the season, blueliner Nick Kyte made his return to the Picton lineup a special one as he buried his first of the year in his first game to put the Pirates up 3-1.

Logan White and Matt Poole assisted on the Kyte blast that would stand up as the eventual game winner as Port Hope’s Corey Samon would score just 11 seconds afterwards to make it 3-2.

It was definitely gut check time in the third but we were able to grind them down pretty good,” Green added.

Getting Kyte back into the Pirates lineup after a semester of school away from the Quinte area was a boon for the locals and certainly bolsters an already deep lineup.

“We are so excited to have Nick back,” Green added. “He brings a physical element, can lug the puck and can make a great first pass. He’s great on both sides of the puck.”

McNair made his return to the lineup on Thursday as well after missing some time with an injury and stopped 18 Port Hope shots including all eight in the third period to preserve his fourth win of the season.

“McNair played well and we are back to having a healthy compliment of him and Brennan Bush” Green said, adding the club would be keeping Brock Prescott on as a third goalie in case an injury surfaces.

In terms of health, Green said there was not timetable for the return of Nate Boomhower but the winger is getting treatment and his return to the Picton lineup will happen sooner rather than later.

Picton will host the Gananoque Islanders on Thursday night and travel to Campbellford on Saturday.