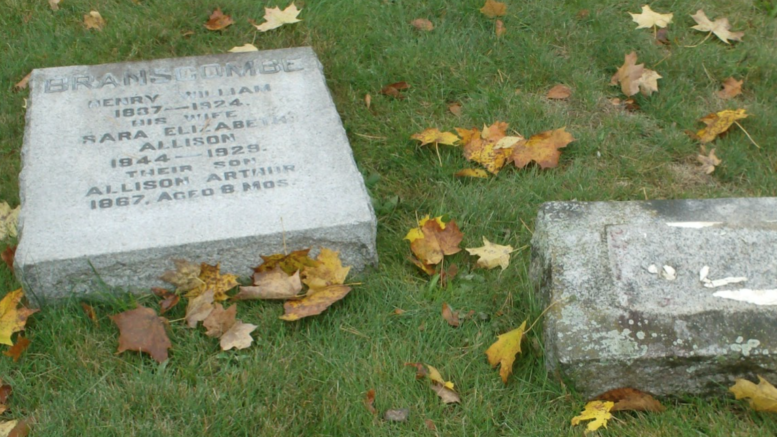 TOPPLED MEMORIAL- The Branscombe family stone was one of several knocked over and damaged in a late June vandalism spree at Glenwood Cemetery in Picton. (John Lyons for the Gazette)

The discovery and admiration of an early 20th century music composer native to Picton has led to an orphan stone at Glenwood Cemetery being identified and restored by descendants living in the United States.

The stone of William and Sara Branscombe and their infant son Arthur was one of the 200 plus stones toppled in a late June vandalism spree that caused over $150,000 worth of damage to memorials at Picton’s ‘City of the Dead’.

The alleged perpetrators of the spree are before Picton’s Youth Justice Court as the matter winds its way through the legal process.

Meanwhile, at least one orphan stone will be fixed up, repaired and reset on its base in the spring thanks to a New Yorker’s love of Gena Branscombe’s music, the dogged determination of a local researcher and the deep appreciation for family and legacy by living descendants 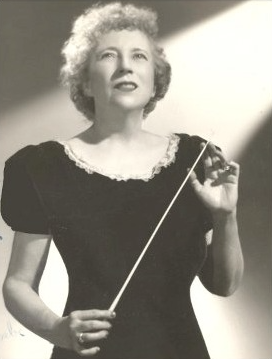 The story of how the stone was identified and the living family members made aware of the devastation at Glenwood in late June started way back in 1999 when actor and singer Kathleen Shimeta was contracted to arrange a Valentine’s Day recital in Florida and practically stumbled over the music of Gena Branscombe, a world-renowned composer and pianist that was first published at the age of 18 and studied music all over the world.

During her professional career, a total of 22 different music companies published 74 of her choral compositions, 150 art songs, 13 piano pieces and eight instrumental works and her chorals and musical pieces were performed by top artists of the day all over North America and Europe.

Supported by her father Henry William, a local dentist ,and mother Sara who was a published writer and poet in local and national newspapers, Gena left home at the age of 15 in 1896 and studied at the Chicago Musical College where she eventually joined the faculty.

By 1909, she left the United States and studied under the original Engelbert Humperdinck in Berlin before returning a year later and marrying John Ferguson Tenney at what would have been equivalent to a royal wedding in Prince Edward County at the time.

News recaps of the nuptials dominated the front page of the Oct. 7, 1910 Picton Gazette.

Her work continued to be lauded during the early part of the century and performed in places like Carnegie Hall and before such public figures as President Theodore and Edith Roosevelt.

But by 1955, Branscombe’s work had gone out of print and was unpublished.

Shimeta told the Gazette she needed to know more about this Canadian female composer who had produced these wonderful songs, setting beautiful poems to musical beds and creating in demand chorals and art songs.

“Discovering her music was just the start of my Gena Branscombe project,” Shimeta told the Gazette.

With the support of Gena’s oldest daughter, who held her mother’s namesake and has since passed away, Shimeta was able to create and produce a one woman show that contained 15 Gena Branscombe compositions and told the Picton native’s life story.

“As I read more and more about her life, I thought someone needs to tell her story,” Shimeta said. ‘It’s a century old but it’s so unique and wonderful. Every time I performed it, people would ask ‘Why didn’t we know about her?’” 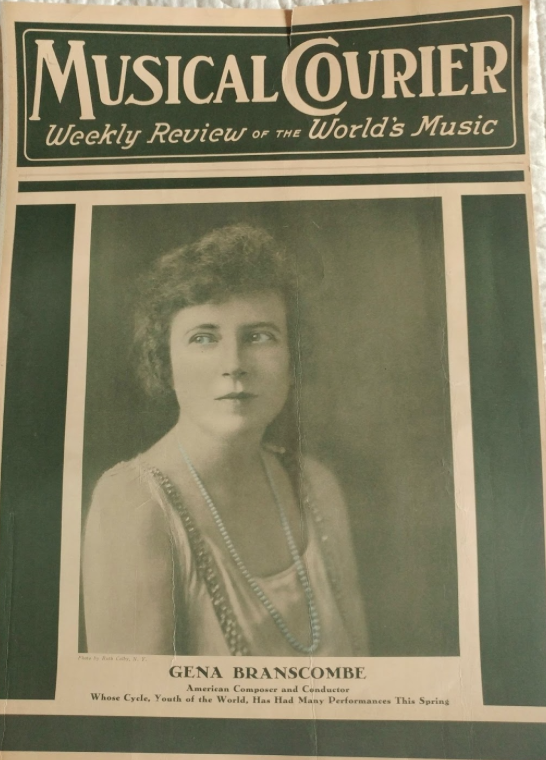 It’s Shimeata’s belief that Branscombe’s compositions, flowery and romantic but substantive, were a victim of the era when female work wasn’t as valued as work completed by male counterparts as well as the Great Depression where work by female writers and composers were sent to the waste basket due to the lagging economy.

In order to flesh out the early part of her life and build the Gena Branscombe musical, Shimeta knew she needed to make contact with people in Picton.

A cold call to the local Historical Society put her in touch with Margret Haylock-Capon, a noted columnist and authority on Prince Edward County history who had penned a biographical story about Branscombe.

This information was part of what helped build Shimeta’s show about the life and times of Gena Branscombe entitled Life! Love! Song! A visit with Gena Branscombe and Shimeta was extremely complimentary to her Canadian sources.

“Everyone along the line in Canada has been jaw droppingly wonderful and helpful to me and appreciated so much. Without even asking, people have sent me loads of information on this ‘Daughter of Picton’,” Shimeta added. “(Lyons) has especially gone to amazing lengths to every dark corner to gather information. A marriage certificate, where she shows up on a Canadian census, the front page article on her wedding in the Picton Gazette, he found a lot of valuable information for which I’m eternally grateful.”

Even recounts of when Gena Branscombe would come back to visit Prince Edward County and hold recitals of her music for fans who never forgot her local roots were unearthed.

The concerts were celebrated by locals as if Branscombe’s accomplishments were that of a family member and such civic pride came from the fact a local person was held in such high esteem by those involved in the fledgling music industry of North America.

Fast forward to current day and it was Lyons who had the unfortunate task of relaying the news of the desecration of the Branscombe family memorial at Glenwood to Shimeta. 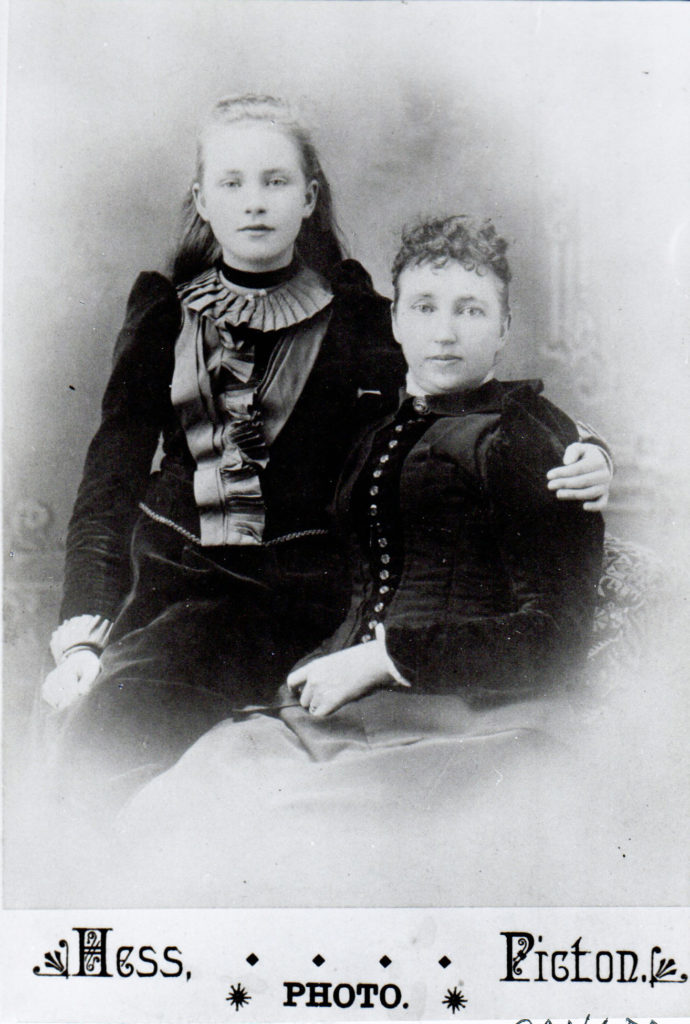 Gena Branscombe and her mother Sara Elizabeth (Allison) Branscombe in a photo taken in Picton in 1891. (Phenix family collection)

With only very distant relatives living nearby, the stone is an example of a toppled or broken Glenwood memorial that is no longer at the forefront of direct descendant’s minds and the news of such likely hasn’t reached the ears of such individuals.

In other words, an orphan stone.

“It was devastating,” Shimeta recalled at hearing the news. “I sent money to Glenwood because it’s the Branscombe family and there’s something very unique about the family. I’ve been so blessed to have them as a part of my life.”

Roger Branscombe Phenix, and his brother Morgan Scott Phenix are the sole surviving descendants of Gena Branscombe. Roger and his wife Jo Ann live in rural New York state,  an hour from New York City where Gena Branscombe raised her family from 1910 and lived until her death in 1977.

As youngsters, Roger and Morgan accompanied their parents on a summer trip to Picton, where they were greeted warmly by Branscombe and Allison cousins and extended family. They were taken on a tour of the family neighborhoods and their beloved sand dunes.

Roger told the Gazette that he and his brother walked together with their parents on the beautiful greensward to the final resting place of their great grandparents, Sara Elizabeth Allison and Henry W. Branscombe, at Glenwood Cemetery.

The pictures of the devastation and news stories brought back a flood of memories and family tales.

“I was very saddened and shocked by the news of the vandalism,” Phenix said. “And Mr. Lyons pictures. I looked at the pictures and knew instantly where it was and knew that I had been there and visited the stone more than 50 years ago when I was 7 or 8 years old.” The pictures of the devastation and news stories brought back a flood of memories and family tales.”

Phenix, who provides services in the motion picture, television and filmmaking industry and counts New York’s Metropolitan Opera as one of his clients , is proud of his family’s legacy when it comes to music and mentioned his mother Gena Tenney Phenix and her mother Gena Branscombe were said to be the only known mother-daughter composer and conductor combination in the world.

Phenix recalls getting a guitar at an early age and his grandmother encouraging him to listen to the sound of the instrument and to get a good teacher how could help him learn further.

“From her encouragement, I still play but I never got very good,” Phenix said with a laugh.

Among his family records is a 1929 indenture agreement paid by Gena Branscombe to Picton’s Glenwood Cemetery for continued maintenance and rights to the family plot.

His grandmother passed away in 1977 and knew she could have been interred in Picton. 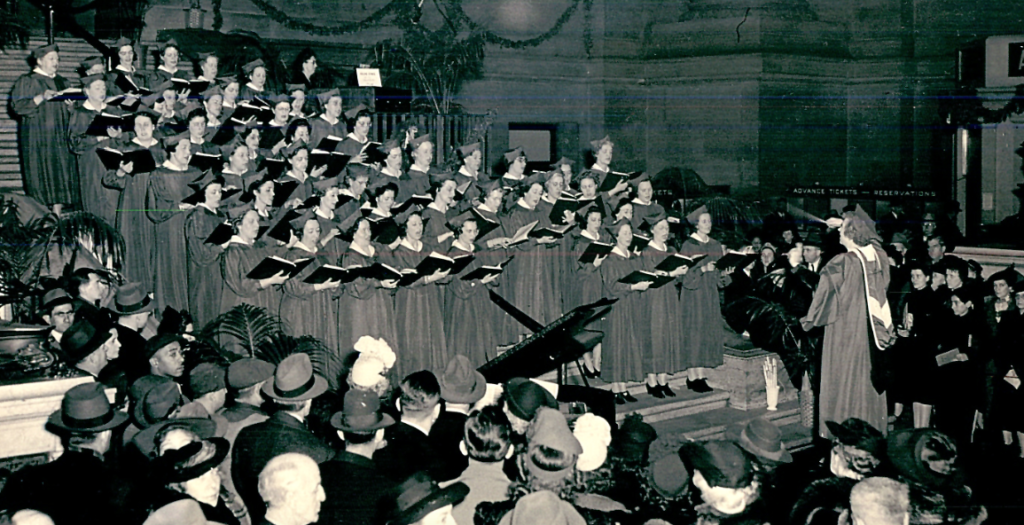 The Branscombe Choral led by Gena Branscombe sometime between 1934 and 1954. (Kathleen Shimeta collection)

“She wanted to be buried in Methuen, Massachusetts where her husband and children who predeceased her were buried but she did have the choice of coming to Picton and being buried with her parents.”

While his mother had kept up with news of Picton, subscribing to the Gazette until her death in 2007, Phenix was unaware of the vandalism until Shimeta informed him and only after viewing pictures did he start to understand the scope of the damage.

Roger Phenix followed up Shimeta’s news with letters to extended family members explaining Branscombe memorial in particular and Glenwood Cemetery in general and some family members have donated money both to the general repair fund as well as specifically to repair and restore the family stone.

“Jo Ann and I plan to contribute to both in bits and pieces on a continuing basis and I’m sure it will be ongoing for us for some time. We hope to return to Picton in 2020 and see the family plot and see the repair,” Phenix added.

Glenwood cemetery chair and president Sandy Latchford was enthused with the news that the extended  family offered to help cover the costs of repairing the Branscombe stone and, while it might be a drop in the bucket in terms of what is facing the cemetery, any donation is valued. 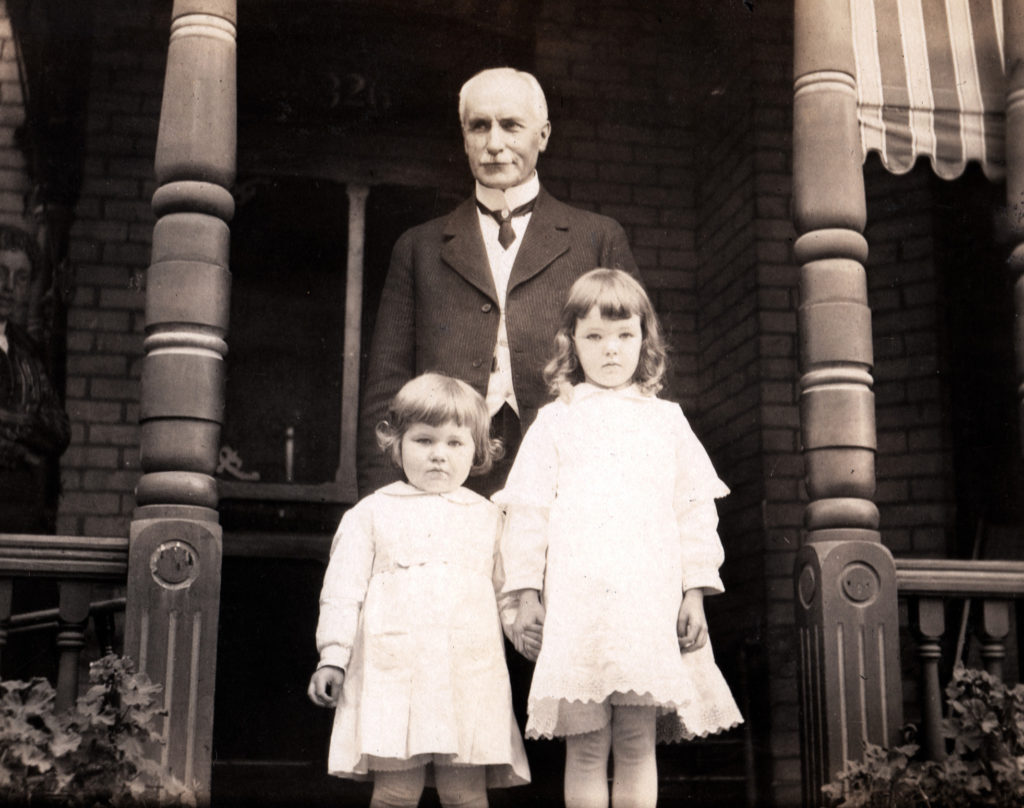 Picton dentist Dr. Henry William Branscombe and his grandaugters (from left) Betty and Gena (the younger) at the front step of their Picton home in 1918. (Phenix Family Collection)

The story also served to illustrate how far and wide a family can spread in just under a century and how cemeteries would lose contact with family members after a generation or two.

“People tend not to think about notifying the cemetery when they move away and settle somewhere else and you look at the damaged stones, there are burials from the 1860’s to the 1920’s,” Latchford told the Gazette.

Glenwood has uploaded burial records to its website to ensure those checking in or trying to discover more about their family lineage might be able to source beneficial information.

Latchford thanked all those involved in connecting the dots between Dr. Henry William and Sara Branscombe and the Phenix family including Lyons and Shimeta.

“It’s wonderful Roger and his family value the history and the connection to Glenwood and the town of Picton and Prince Edward County,” Latchford said, adding it was somewhat serendipitous how this connection started at end of last century with Shimeta’s early inquiries into the musical career of a talented woman from Picton and resulted in the Phenix family discovering the damage that had been done to the family memorial and their support of the restoration efforts.

“Isn’t it also somewhat ironic considering all the musical benefits that we’ve had in support of the restoration in the past year that Gena’s family would be found and would step up and help fix their family memorial? Everything has been connected to music after the vandalism and I think it would be wonderful and appropriate if we could have a performance of her music here in Picton sometime next year,” Latchford added.