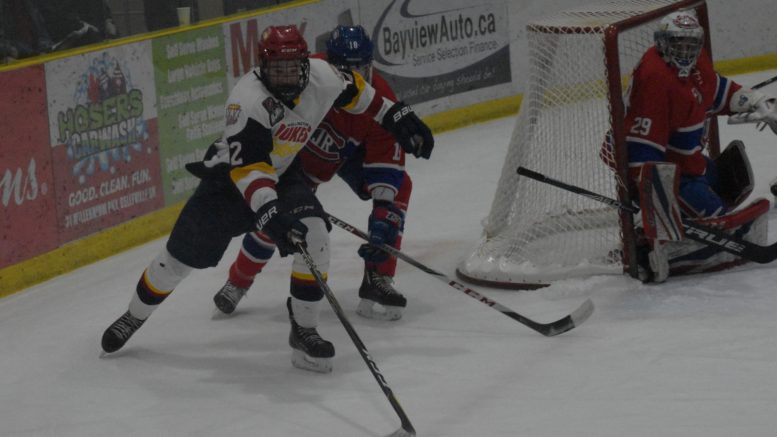 OUT OF TOUCH- Wellington Dukes forward Daniel Panetta tries to regain control of the puck while being checked by Toronto Junior Canadien Cameron Fulop during the visitors 4-3 win at Lehigh Arena Friday night. (Jason Parks/Gazette Staff)

It was a difficult weekend for the Wellington Dukes faithful but it had much more to do with what transpired off the ice as opposed to on it.

The Dukes dropped a pair of home games this weekend, losing 4-3 to the Toronto Junior Canadiens on Friday night and then coming up on the short end of an 8-6 fire fight to the Toronto Patriots on Sunday afternoon.

But that’s burying the lede as a long time and dedicated Wellington Dukes volunteer succumbed to a lengthy illness.

The organization paused ahead of Friday night’s proceedings to honour the memory of Dave Brown.

Browser, as he was known to everyone in Wellington and in hockey circles across Ontario, passed away Thursday in his home community of Newcastle, ON at the age of 71.

Because Brown would hate to overshadow the organization in anyway or deflect attention away from the players in the organization, this column will now go through the seemingly meaningless motions of recapping Wellington’s losses at Lehigh arena this weekend.

The Dukes opened up on Friday with the added bonus of not having to deal with University of Michigan Eric Ciccolini who had made the Team Canada East roster for the 2018 World Junior A Challenge in Bonneyville, AB but the Toronto Junior Canadiens were just too much for the locals to handle anyway.

Down 1-0 after one thanks to a delayed penalty goal by Matthew O’Brien, Wellington Duke Keenan Eddy would collect a nice Dylan Massie feed at the 10:18 mark of the second to tie the contest at 1-1.

Wellington would outshoot the Baby Habs 14-8 in the frame and probably deserved to be up a goal or two but the netminding of Christian Mattiace kept Toronto in the contest.

The Junior Canadiens would capitalize on a tough bounce at 6:46 thanks to Matthew Falls and then O’Brien checked in with his second of the night less than a minute later on the powerplay.

Wellington’s Dawson Ellis would score a shorthanded goal at 9:48 but Toronto would erase any momentum gained as O’Brien capped off a hat trick effort on the powerplay at 10:18.

The gambit, if it was planned, worked again as Elijah Gonslaves shovelled a loose puck to the Junior Canadiens net at 11:42 to make it 4-3.

To their credit, Wellington did turn the tables late in the contest and Gonsalves came to within an inch of knifing home an equalizer but Mattiace stood tall down the stretch.

Toronto must have smelled blood in the water as Cole Burtch scored from the doorstep on the Patriots first shot on net.

That early marker was part of a four goal barrage Toronto hung on Wellington at the Pats lead by a safety after 20 minutes.

In the second, the goals continued to flow as the teams played it back and forth.

After Aleks Dimovski made it 5-2 for the visitors, Ellis showed a burst of speed and broke in on Toronto starter Carter Tahk to get the Dukes to within two.

Tyson Gilmour and Andrew Rinaldi would also score in the frame but those goals were surrounded by Patriot goals including a tally from Chris Pappas at the end of the frame to cap off a hat trick.

Almost assuredly, if he was still with us, Dave Brown would have mentioned to me at the next Wellington home game the last time two opposing players had hat tricks in back-to-back home games.

In the third, Gilmour added an extra attacker goal in the final minute to make it an 8-6 final.

Now to the more important writings. 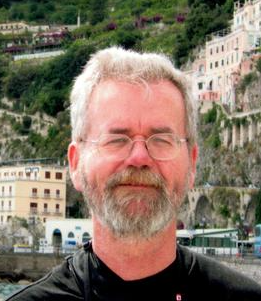 A goal judge, a team historian, a media compiler and author of press releases during the Marty Abrams era, Dave Brown was as dedicated to the Wellington Dukes organization as anyone without the last name Lavender for decades starting in the mid to late 1990’s.

“He would come into the store and he and my dad would talk hockey for hours,” former Wellington coach Tod Lavender said. “When my dad passed away, Browser was very involved in the Garry Lavender Memorial Golf Tournament as both a way of giving back to the organization as well as remembering Garry and his legacy.”

It was ritualistic the way Brown would track your humble scribe down on a wintery Friday night inside the Dukedome (Old and new) and start a conversation by looking skyward and providing a preamble about a stat or fact concerning a long forgotten player and then immediately go to where said player was plying his hockey trade currently.

And without mentioning the player’s name, Brown would then quiz the assembled media as to who it might be.

“Jason, there was a Wellington Duke that last played Jr. A in 2005-06 that scored his first goal for the Louisiana Ice Gators of the Southern Professional Hockey League last night,” Brown might say. “I’m sure you know who that is.”

As usual, this corner didn’t.

“Why it was Tyler Lyon from Foxboro. Don’t you remember he played in five different seasons for the Dukes before heading off to Oswego to play for the Lakers ?” Brown would incredulously ask this reporter who was sheepish after losing yet another Dukes trivia faceoff to the man they called Browser.

Brown’s presence was missed this season as he battled cancer so valiantly and, when the former City of Toronto accounts receivable employee was a no show at the recent Wellington Dukes-Toronto Maple Leafs Alumni game last Saturday, the Gazette started to worry.

“He was so vested in the career and lives of every player that came through the organization and he did so much research to build up the alumni page on the Dukes website,” Lavender recalled. “He really kept tabs on everyone no matter where they went in hockey.”

Brown would tell you with authority through email every team single stat from the Abrams era when the team would accomplish such goals as qualify for the playoffs 25 some years in a row or rack up 30 win seasons consecutively for decades and how it eclipsed other organizations in the Ontario Junior Hockey League.

During times of good health, Brown could also be counted on to email playoff primers and tell you the history of Wellington versus its combatant in an upcoming series even if that head-to-head contest came decades ago, in another league and even if the opposing franchise was located in an entirely different community.

After retiring to Wellington, Brown would later relocate to Newcastle in the last decade so he and his wife Barb could be closer to their grandchildren.

Despite the distance, Brown continued to be a main stay at Wellington Dukes games and would even show up to preseason training camps, spring camps and exhibition games where his services as a goal judge were not required but undertaken anyway.

This corner will miss the conversations, the levity, the gentle reminders when a name, stat or fact was fudged in the pages of the Picton Gazette but most of all, it will miss the undying and rare dedication of a valued volunteer that understood the Wellington Duke legacy, its place in Prince Edward County and the revered history that is so ingrained in all of its successes to date.

It says here that Brown’s legacy and others like him that have stayed the course with the Wellington Dukes franchise through thick and thin, good times and bad, should never be forgotten or undervalued by the placeholders of today.