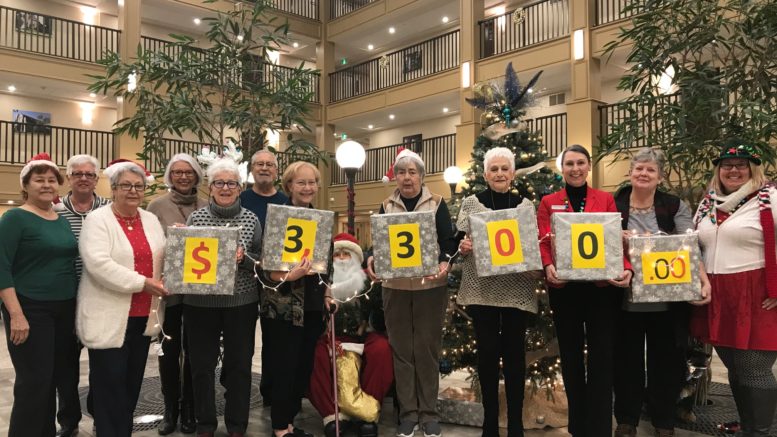 Spirits were bright at the Wellings of Picton on Thursday as a group of residents presented the Prince Edward County Memorial Hospital Foundation with a holiday gift of $3,300.

The proceeds from the Bazaar will be used to help lift the spirits of the Back the Build Campaign as Wellings residents feel a new hospital for Prince Edward County is greatly needed.

In total, 20 vendors sold their wares and close to 300 people attended wit the the bake sale creating a large portion of the contribution.

Rachel Henry, Wellings general manager thanked the community for attending and extended her and staff’s heartfelt thanks to the residents who helped organize this festive event.

“The Wellings of Picton residents group that came together to make this gift in support of the Back the Build campaign” PECMHF Executive Director Shannon Coull said. “It speaks to the importance of community involvement and the impact that it has on the quality of life for those residing and visiting our County. We are so grateful for the support shown to us by the residents living at the Wellings of Picton and their keen interest in the future of our hospital.”

Since forming in 1985, the Foundation has raised more than $6 million for medical equipment and building renovations.

Annually, the Foundation funds the purchase of an average of $400,000 in medical equipment and it’s also responsible for raising the community’s share of $12.7 million for a redeveloped Prince Edward County Memorial Hospital plus an estimated $3 million for medical priority equipment to be moved into the new facility.

Overall, the Foundation expects it will need to raise $16.5 million over the next five years.