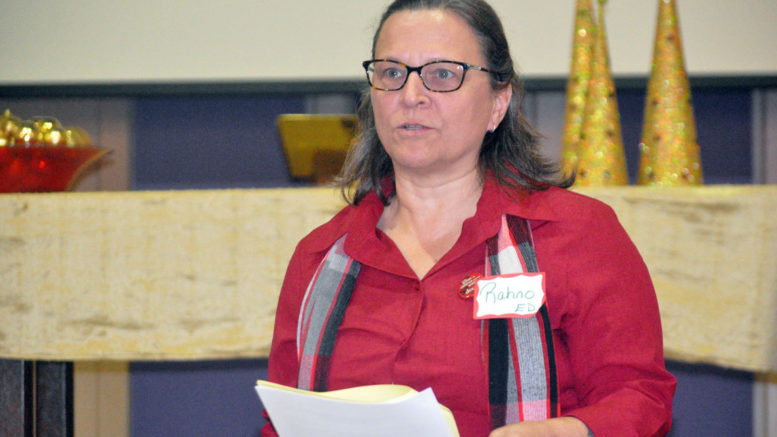 Alternatives For Women is inching closer to constructing a new home that will also provide affordable housing and an emergency shelter space for women facing abuse in Prince Edward County.

Following a candlelight vigil for victims of violence against women Dec. 6, officials with the agency discussed their progress in securing a building at an undisclosed Picton location.

Board chair Caroline Granger reflected back on the same meeting a year ago when she said she was fairly confident Alternatives would soon have a place to expand its Kiosan second-stage housing program and maybe provide the county’s first shelter space. That has come to reality.

“It is a lovely home. The two years we spent looking for this house seemed interminable. It seemed like we were never going find anything and if we did, we’d never be able to afford it,” she said.

Granger said the agency was approached about its property and offered an opportunity to buy. While it took some time for planning and permitting, a week ago, the County gave the go-ahead to start renovations.

The John M. And Bernice Parrott Foundation gave $250,000 in support of the project and the 100 People Who Care Prince Edward County also gave money to help move it forward.

“As it grows and these plans develop, we’re hoping there will be three beautiful studio rooms for women, a fully fledged affordable housing apartment in the house, as well as offices for Alternatives and some cozy places in the attic for people to hang out,” Granger said. “It has a lot of potential.”

Executive director Rahno Boutilier added that Alternatives For Women serve about 250 women in the county each year. About 20 of them will require second-stage, or transitional, housing. Boutilier said there have been challenges accommodating them, particularly given that a number of single women without children were coming into that program.

She said Alternatives For Women currently has a six-unit apartment complex with two one-bedroom units and four two-bed room units. It also had an older family home on King Street that has been sold. In order to accommodate the need, the agency tried communal living on King Street, but without staff on-site 24 hours a day, crisis situations became difficult. Co-habitating women in the two bedroom units in the apartment complex “kind of worked” but it was clear the women needed to have their own space. Both the single women and those with family needed stable environments.

“It needed to be fixed,” she said. “Why should we have to sacrifice the safety of one group of women when we have the resources to tend to them both?”

Even after selling the King Street property, Boutilier said she became “very disillusioned” with the process.

“It came to me that we really do have to do something about housing situation — not just in Prince Edward County, but across Ontario,” she said. “There’s not safe and affordable housing. Caroline did allude to the fact that we looked for two years. The buildings we looked at were suitable, but we couldn’t afford them. People were coming in from out of town and offering above the asking price. We just don’t have that kind of money as a not-for-profit.”

Shelter was also becoming an issue with the nearest emergency shelter in Belleville. Many women can’t leave Prince Edward County because their lives and supports are in the community. On nights where women couldn’t get to shelter, Alternatives For Women was able to connect them to after-hours homelessness funding for hotel rooms, but tourism has made that difficult too. The closest room available for a woman facing crisis on a fishing derby weekend was the other side of Cobourg.

Finally, with community support, the change will occur and Granger hopes it can take place by spring. The province has also contributed funding for the affordable housing unit and the agency is optimistic the federal Canada Mortgage and Housing Corporation might also contribute.

“Once we get going, there will be lots of ways to engage the community and build this house for some of the most vulnerable people in our community,” Granger said. “We’ll create a safe place where they can get their feet under them and move onto live where thy are free. We can start getting the statistics down.”