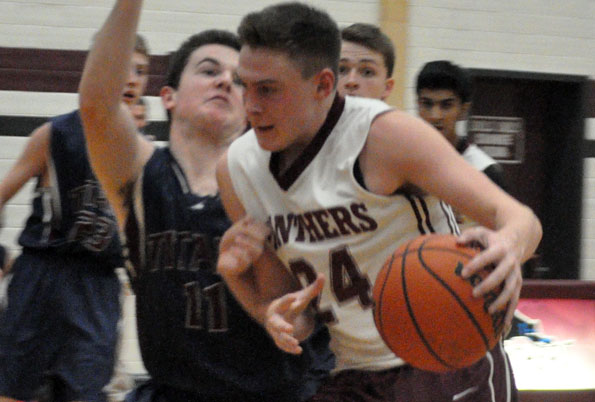 Driving - Power forward Logan Stark is just one of a wide array of weapons that should keep the PECI Senior Basketball Panthers in the hunt for Bay of Quinte Conference supremacy this season. (Gazette file photo)

With a pair of unbeaten Panthers teams sitting atop the Bay of Quinte Conference standings, the PECI boys basketball program is enjoying another strong start.

The seniors improved to 3-0 and a first-place tie with St. Theresa and Nicholson Tuesday by beating the St. Paul Falcons 61-27 in their home opener. Brodie Byford had a game-high 16 points while Logan Stark and Justin Smith added seven each.

The Panthers also defeated Centre Hastings 70-18 to open their season.

In junior action, the Panthers are 4-0, tied with the Eastside Ravens, who have a similar mark. Their latest win came Tuesday in a 71-44 win over St. Paul. Ryan Doolan had a season-high 20 points in the game.

On Monday, the Panthers beat North Hastings 53-36. Cameron Pero scored 10 points. Cole Lavender and Justin Johnson had eight apiece. The Panthers also beat the Quinte Christian Eagles in the past week, 58-40. Pero was the top scorer in that game with 15 points, while Doolan and Lavender scored 11 each.

The Panthers opened their season with a 49-32 triumph over the Centre Hastings Centurions.

Both teams are home Tuesday for a double-header with Bayside. The juniors tip off first at noon.