More than 30 people placed roses at a solemn candlelight vigil at St. Andrew’s Presbyterian Church in Picton Thursday to remember women who were victims of gender-based violence.

One-by-one, women, men, and young children stepped forward and read the name and age of victims before crossing the floor to add to the tribute. 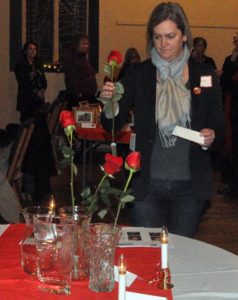 An act of remembrance – Alternatives For Women board member Emily Cowan places a rose to remember a victim of violence against women at St. Andrew’s Presbyterian Church Dec. 6. (Adam Bramburger/Gazette staff)

Kelly Knott, a counsellor with Alternatives For Women, said the annual Dec. 6 vigil remembers the 14 women killed at Montreal’s L’ecole Polytechnique on that date in 1989, plus victims of violence against women throughout the 29 years that followed.

“We also commemorate missing and murdered aboriginal women, trans women, and each and every woman in Ontario and across the world whose lives have been harmed or lost to gender-based violence.”

Knott read that by July this year, it was reported that 78 women lost their lives to gender-based violence, or femicide, with 48 women killed in Ontario alone. She said the list is likely larger with some women missing or not identified. In particular, she spoke of the Toronto van massacre in April when a man mowed down 26 people on sidewalks. Of the 10 that died, eight were women and Knott cited an emerging trend as his motivation.

“It was said the man was part of an online culture called incels — involuntary celibates. Incels blame feminism for their perceived involuntary celibacy. Women, it seems, have to shoulder the blame for the troubles of men. Here we are, 29 years later, still fighting gender-based violence.”

Caroline Granger, the board chair at Alternatives For Women, noted there have been some positive developments, like a 16-day awareness campaign by Canada’s Status of Women Office, called #MyActionsMatter, that encouraged Canadians to reflect about gender-based violence and to stop it. Still, however, she said the trends make it difficult to be positive.

That’s particularly discouraging, she said, since it is also notoriously under reported. She also noted that every six days in Canada a woman is killed by her intimate partner and half of Canadian women have experienced at least one incident of physical or sexual violence since age 16. The cost of violence against women, according to the Department of Justice is $7.4 billion annually. Any given night, 3,491 women and 2,724 women sleep in shelters and on any given night, about 300 are turned away.