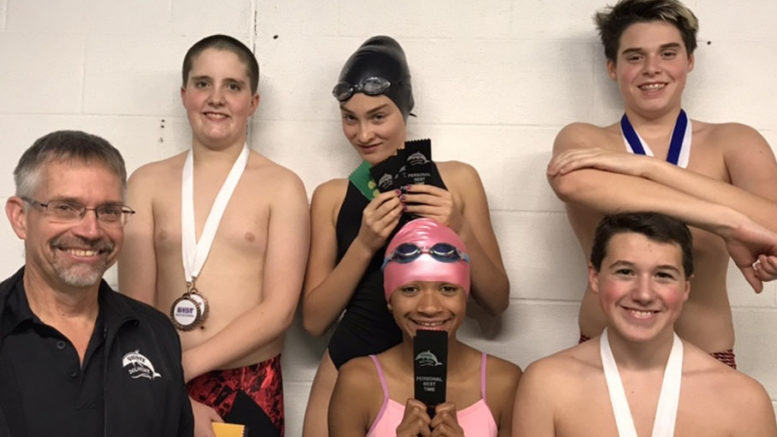 Each swimmer recorded at least one personal best, some captured medals

Jonah Barnes would lead the effort with new club records in the 50-metre and 200-metre breaststroke for boys aged 13-14. He also had five personal-best times and finished in the top-eight four times including a second-place finish and two third-place finishes.

Not to be outdone, McKinley Miller also set a club record, his in the 100-metre backstroke for boys aged 11-12. Miller would also set five new personal-best times and finish in the top eight six times. He captured a pair of bronze medals.

Celia Reynolds also hit the record parade with a new club mark in the 200-metre breaststroke for girls aged 11-12 with a qualifying time for the Eastern Ontario Short Course Championships. She also posted five new personal best times and finished in the top eight twice.

Matthew Petracca broke the 30-second barrier in the 50-metre freestyle. He captured four new personal-best times and finished in the top eight six times with a pair of bronze medals.

Not a single member of the Dolphins left the Belleville pool without setting at least one new personal best. Gwen Gillingham improved her times in three separate events, while Kate Jones set four new standards for herself. Abby Latchford followed up her impressive opening meet with another personal-best time.

Like Gillingham, Quinn Middleton also looked strong in her first meet of the season with five new personal best times, while Ty Lavers dropped time in five events and once reached the top eight in his competition.

Dolphins coach Jim Anfield says that with continued hard work the Dolphins can expect their times to continue to tumble as the team travels across Ontario and beyond. He congratulated the swimmers on their accomplishments and thanked their parents for their support.