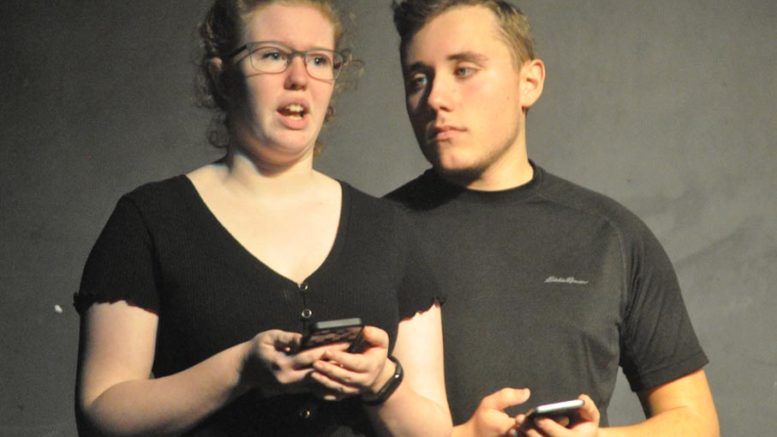 Uncomfortable - Aaron Wiik’s character gets a little too close to Alanna Wolfe’s character during a portion of “Boys Will Be Boys” that was based on students’ actual experiences with unwanted attention. The students took part in the school’s eighth annual effort to raise awareness and encourage equality. (Adam Bramburger/Gazette staff)

Before an audience of younger students in the school’s drama room and again for survivors of violence and abuse at Belleville’s Core Arts and Culture Centre later in the day, they offered a collaborative creation “Boys Will Be Boys” that shared the message that violence and abuse isn’t OK and neither is limiting gender roles.

The students had been working for about a months to create the series of monologues, scenes and vignettes that went into the show. There were examples of name calling, of victim shaming, controlling behaviour, and outright violence. Some went out of their comfort zones to play abusers, while others had to recall the difficult situations where they had been a victim themselves. 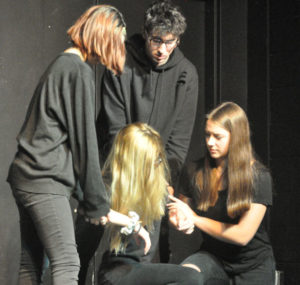 Never alone – Members of PECI’s senior drama class help another performer to her feel to show the importance of support during their annual Dec. 6 play ‘Boys Will Be Boys” last Thursday. (Adam Bramburger/Gazette staff)

“I think the hardest part for me was knowing a lot of this stuff is still happening. A lot of my classmates, myself included, still deal with this stuff on a daily basis,” said Shelby Gratton, one of the performers.

Members of the class talked about one skit featuring a range of unwelcome advances as being a collaboration of stories girls in the class experienced in their Grade 9 year alone.

Aaron Wiik, another of the performers, said the assignment really forced students to think about the topic at hand and consider the actions that take place around them and their impacts.

“For a lot of us in the room, we weren’t really thinking of this as a problem. It wasn’t at the forefront and we weren’t consciously thinking about it and seeing how many people it effects,” he said. “It isn’t something you hear about on TV or in a court case. It can affect people even in our own class. It really brings it closer to home.”

In one of the more comedic scenes, Wiik had to play a farmer with stereotypical beliefs about his wife’s role being to take care of the house and not speak. The character also saw gender roles as limited.

“One that wasn’t easy was that game show scene. I had to be that terrible, terrible guy. Getting into that character isn’t easy when he’s the total opposite of what you truly believe,” he said. “When I first attempted it, it just felt so wrong and I didn’t want to do it at the beginning. After a while, I kind of saw the value of presenting the polar opposite to the audience.”

Cori Goodman said in this year’s performance, the actors also tried to make a conscientious effort to show that it isn’t all males that are in the wrong either, but that abuse can happen in many ways.

“A really hard part for the girls is trying not to make the guys seem like they’re the ones doing everything wrong. When we’ve done the show in the past, guys have come back and said ‘Not all guys are like this.’ It does go both ways,” she said. “This year, we really focused on gender roles and how boys are told ‘This is how you have to act,” and how girls are told ‘This is how you have to act.’ That’s not how today’s society works, but some people are so in that mind set. We focused on how to beat that and how to show that we’re all equal.”

Teacher Matt Sheahan said the play was geared around the idea of “toxic masculinity” and said that’s not to say being masculine is wrong, nor is being feminine. He said he believes gender is on a spectrum and that society has to stop defining people by ridiculous notions — like men shouldn’t wear pink clothing or wear earrings. Ultimately, he said, its’ respecting one another’s ability to make their own choices in life.

“People should respect one another for who they are, not from some bizarre distinction we force upon ourselves. Be who you want to be, not who other people are telling you to be.”

Several members of the class said even when they were in elementary school, there wasn’t a lot of talk about how to behave in relationships and show respect. Some said they were taught how they should act to stop unwanted advances, rather than being taught it’s not their fault. They stressed going to people who can help.

“If you do go through something, you need to tell somebody,” said Kennedy Babutac.

Added Jordon Foster: “We are not trying to scare you. Not everyone out there is trying to come after you or hurt you. It’s just to make you aware this is a possibility.”

Terra Cobb said the “Boys Will Be Boys” concept really resonated with members of the class, especially after they heard about a court case in Ireland where a defence lawyer referenced the style of a 17-year-old woman’s underwear in a rape case.

“We were all very frustrated. Our letters were like scribbles of angry,” she said. Cobb added the students took away the idea they could use that motivation to educate their peers.

“We can say this has happened in the past, but it’s our generation that has to change that reality and the concept of ‘boys will be boys,’” she said. “It brings it home to our audience too. We all understand this is wrong, we have to think about how we can change.”