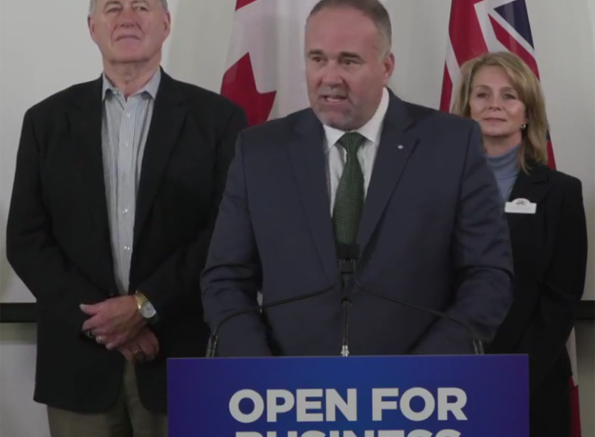 Ontario’s Minister of Economic Development, Job Creation, and Trade Todd Smith was in Belleville Friday to announce the Province’s latest initiative to cut regulation it says is bad for business.

On Thursday, the Bay of Quinte MPP tabled the Restoring Ontario’s Competitiveness Act, an omnibus bill amending existing legislation featuring 32 actions to cut red tape across 12 ministries. Smith said the implementation of the bill could save businesses $24 million in annual cost savings.

“From the premier on down, the government sees cutting red tape as an urgent priority. We’ve got a real problem in Ontario with the high cost of doing business here,” Smith said. “A big part of that problem is red tape. The Liberals never saw a piece of red tape and regulation they didn’t like and we’re seeing the cost of that today smothering business.”

Smith said Ontario now has more than 380,000 regulatory requirements and he cited a report from the University of Toronto’s Munk School of Global Affairs and Public Policy he said shows Ontario has the highest cost of regulation among any of Canada’s 10 provinces. U.S. states are also a concern.

“Job creators are telling about a troubling trend: The widening gap between Ontario and the U.S. states that are our chief competitors. While Ontario’s regulatory burden keeps growing, the U.S. is lightening its load. Job creators are no longer investing to modernize and expand their operations here.”

Smith said his government is working to create a more business-friendly environment. First, he said, it passed the Making Ontario Open For Business Act, which froze minimum wage at $14, reversed some of the previous government’s labour initiatives including mandatory sick days, and scrapped the Ontario College of Trades in favour of a new apprenticeship system.

The new bill touches on a wide array of industries. Smith highlighted a change that would phase in a repeal of the Toxics Reduction Act by 2021. He said the change is an attempt to eliminate duplication.

“This regulates an area the federal government is already doing a great job regulating through its Federal Chemicals Management Plan,” he said. “The federal plan is robust, science-based, and every other province relies on it. Now, Ontario is going to do the same. It frees manufacturers from a layer of regulation that simply isn’t necessary.”

Another provision allows home-based childcare providers to increase the amount of children a worker supervises from two to three. It also lowers the age of participation in recreational and skill-building programs from 6 to 4.

“The package includes proposals aimed at creating a more flexible labour market, making Ontario a better place to employ and work. Offering home-based childcare providers more flexibility in the number and age of children they that they’re allowed to care for makes it easier for parents to find affordable childcare and for employers to find the workers they need.”

The legislation will also change the Labour Relations Act to make public bodies like hospitals, colleges and universities, school boards, and municipalities “non-construction employers,” which means they can bypass union companies in the tendering of capital projects.

Some workplace practices could also change. Businesses will not need to seek permission from the Ministry of Labour to enter into agreements with employees for excess hours of work and overtime averaging provisions; they will have more freedom to merge single-employer pension plans with jointly-sponsored plans, and businesses would no longer have to post an Employment Standards Act poster as they are required to give each employee the document. Horticultural workers would come under the protection of the Agricultural Employees Act.

Municipalities could receive new powers under the Act the government says would help them expedite the planning process for major business investments under the Planning Act. If the municipality could demonstrate a development would create 50 jobs in a municipality under 25,000 people or 100 jobs in a larger municipality, they could expedite development within a year. Some critics have suggested that could compromise acts to protect sensitive areas like the Greenbelt, Oak Rides Moraine, and Great Lakes. Business owners would also see MPAC tax industrial property for its actual use, rather than speculative use if the Act passes.

Other aspects of the bill would change reporting requirements for agricultural loan programs, adopt an outcomes-based approach in dairy regulation, and reduce paperwork and fees for provincially licensed meat processors. The Nutrient Management Act could also be changed to remove the requirement to update strategies every five years if nothing changes.

Smith, who was the Progressive Conservatives’ critic for reducing red tape for seven years in opposition, said he considered feedback from the Ontario Chamber of Commerce in drafting the bill. His parliamentary secretary, Michael Parsa, also engaged in roundtables across the province since the new government took office. The local MPP said the bill is one step among sweeping change proposed.

“This is our second bill aimed at cutting job-killing red tape. There’s going to be more legislation over the next couple of years that shows we’re serious about making Ontario open for business,” he said, adding there’s a target to reduce regulation by 25 per cent by 2022.

“We want to eliminate redundant, ineffective, and outdated regulations and streamline and modernize many others. We’ll maintain the rules that are needed to keep Ontario’s safe and healthy and ensure businesses don’t have to jump through hoops.”

Belleville Chamber of Commerce chief executive officer Jill Raycroft introduced Smith. She said Ontario Chamber of Commerce members, including those in Prince Edward County, sent 90 pages of letters to the ministry in July asking the Ford administration to open Ontario for business. She said it appears the government is listening.

“In those letters are reflected a number of requests to reduce the regulatory burden and I want to say that businesses across Ontario have been telling the government that for years,” she said.