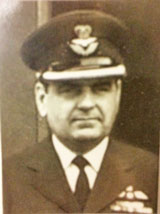 Don Symington
With sorrow we announce the death of Major Donald Symington CD (retired) on December 13, 2018, at the age of 93. Don leaves behind Norma, his cherished wife of 63 years. He was predeceased by his eldest son, Don, and is beloved father to David (Jane), Patricia (Rickie) and Kathleen. Adored Grandpa of Erica (Jesse), Adam, Kalie (Ryan), Lynn (Luke), Brianne (Richie), Caitlin (Shawn) and Neil. Great Grandpa of Dalyana. Don was born and raised within a large family in Toronto. He was a World War II veteran, joining the Royal Canadian Air Force at the age of 18 and serving until his retirement in 1974. Don married Norma Ford, the love of his life, in 1955 and together they raised four wonderful children while stationed in Orillia, Metz France, Halifax, the DEW Line (while the family resided in Comox), Tacoma Washington, North Bay, and Ottawa. The family fondly remembers the weekly letters about Hans Fridget, the DEW Line penguin. After retiring from the Air Force, Don commanded the 52nd Air Cadet Squadron in Calgary. Don and Norma spent many wonderful years in Montserrat, West Indies, where Don was involved with the Red Cross and the Masons. Empty nesters, Don and Norma officially retired to Picton, Ontario, loving the culture, beauty, and people of Prince Edward County. Don enjoyed renovating the “Granny and Grandpa” house at 22 Queen Street, where many memorable family gatherings took place. One of Don’s favourite hobbies was building and flying model airplanes. Don was an honorary member of the “Wednesday” Bridge Club. Don’s integrity, love for his family, and his infamous dry wit will be missed by all. Words cannot describe the family’s gratitude to Hallowell House Long Term Care for the exceptional personal care, kindness, and compassion they provided for Don in his final years. Don’s ashes will be interred in the family plot at St. John’s Norway Cemetery in Toronto. A Celebration of Life, or as Don would say a “Canadian Irish Wake”, will be held at the Elks Lodge Hall, 21 Elk Street, Picton, on Saturday December 22, 2018, between 1:00 p.m. and 3:00 p.m. For those who wish, donations can be made to a charity of choice in Don’s name. Arrangements have been entrusted to Milestone Cremation Services.  Please feel free to share your stories and memories of Don online at  www.milestonecremation.ca