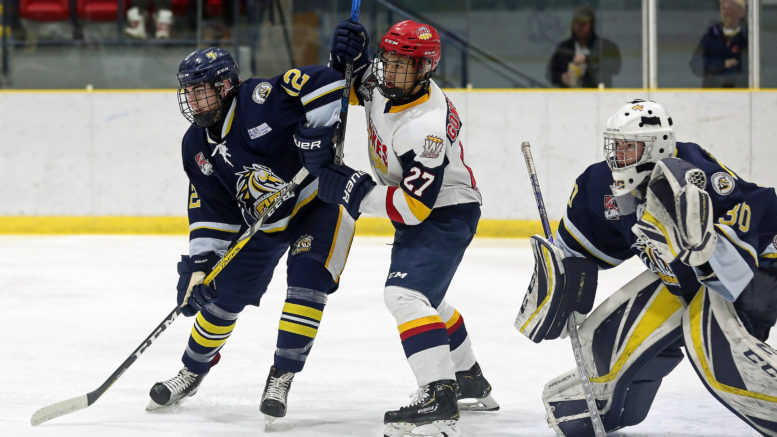 The Wellington Dukes snapped a three game losing streak but the inconsistency and discipline issues that have plagued the defending Buckland and Dudley Hewitt Cup champions continue unabated.

The Dukes got off the slide on Saturday night, defeating the Chargers in Mississauga Saturday by a score of 5-2.

But the win over the last place club in the South Division is hardly the stuff of confidence building.

The action a night prior seemed to see the Dukes trending in a good direction before the bottom fell out in the final minutes of the contest against the Whitby Fury as the club self destructed before an announced crowd of just over 500 people.

Wellington, facing the best penalty killing unit in the Ontario Junior Hockey League at home on Friday night, got off to a nice start on the powerplay when Elijah Gonsalves tapped home a Brett Humberstone point blast just 2:52 in.

The lead lasted just over two minutes as the Fury stormed back with a Derrick McVey tip in the high slot that beat Wellington starter Olivier Lafreniere and make it a 1-1 game.

The Fury would grab the lead in the second frame thanks to a screened shot off the stick of Amedeo Mastrangeli that beat a helpless Lafreniere at the 3:53 mark.

Down a goal in the third, Gonsalves would strike for his second of the contest while the club was shorthanded in the late going.

With just under five minutes to go, Gonsalves started a give and go play with Tyson Gilmour from the Wellington end and it the latter feeding the former in the slot off a 2-on-1 rush to give the Dukes some life.

Wellington would kill off the Andrew Rinaldi interference penalty that saw them down a man but could kill off a Brett Humberstone cross checking call at 15:24 of the third.

Whitby’s Dakota Betts skated along the blueline and drifted another long shot Lafreniere was screened on with just under two minutes to go to give the Fury a 3-2 lead.

For the second straight Friday evening home game, Wellington would come up short in the late going and couldn’t capitalize with Lafreniere lifted for an extra attacker.

Rinaldi boiled over in frustration at the end of the contest and picked up a game misconduct, earning a two game suspension.

The next night, Wellington showed the sum of its parts in stifling the Chargers at Port Credit Arena thank in part to a three goal eruption in the first period.

Gilmour, Keenan Eddy and Madoka Suzuki all beat Chargers starter Luca Durante en rout to a 3-0 lead at the end of 20 minutes.

After a scoreless second, the Chargers got back into the game thanks to a Sheldon Nunes goal in the opening two minutes.

At the 12 minute mark the Chargers shaved the Dukes lead to a single as Matthew Brassard beat Lafreniere.

But Wellington’s Adam Usinger made sure the Dukes would leave victors as he buried his fifth of the season at 15:38.

Gonsalves was able to salt the contest away in the late going with an empty netter while Wellington was dealing with a Charger powerplay.

Wellington is back in Toronto Wednesday taking on the St. Michael’s Buzzers before returning to Lehigh Arena to host the Kingston Voyageurs on Friday in the final game of 2018.

The club is expecting to welcome back a number of members of the 2017-18 club and finally unviel their Buckland Cup and Dudley Hewitt Cup Championship banners.

Ledes at Lehigh: Wendel Clark is scheduled to be in attendance on Friday night. The Toronto Maple Leafs legend was unable to play when the Leafs alumni visited Wellington earlier this month…Wellington Dukes have Woodlawn, ON Kyle Renaud backing up Lafreniere currently. Renaud played 26 games for the Smith Falls Bears of the Central Canada Hockey League last season and is currently on a Picton Pirates card…Defenceman Zach Uens was tapped to participate in the Canadian Junior Hockey League’s Top Prospects game in Okotoks, AB in mid-January.