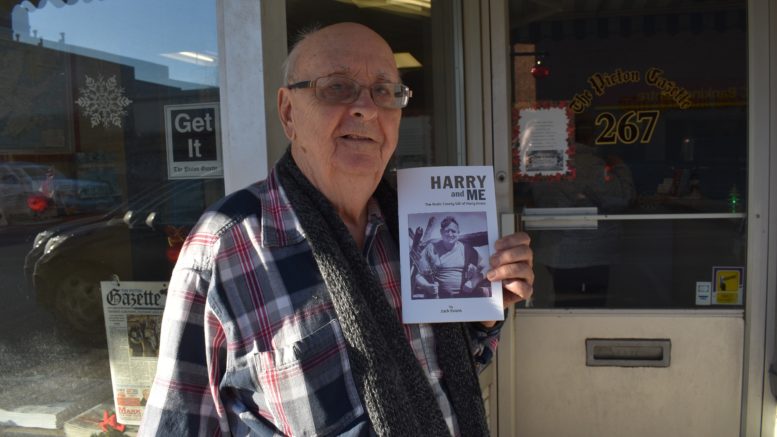 The tenured dean of Quinte journalism has reached into the past to bring back to life one of the Picton Gazette’s most beloved columnists.

Harry and Me: The Rustic County Wit of Harry Evans is a quick read of just 47 pages but devoted readers of the Harry Says column and the letters to the editor that were penned by the late Athol Township dairy farmer will surely want to spend an afternoon or two consuming the book and reliving some long local yarns, fact-of-life musings and funny stories involving plenty of local characters.

When it came to keen County observation with equal parts wit and disdain for the establishment, Harry Evans had his niche here in the pages of the Picton Gazette and the cheshire colloquial scrawl where he described something “ ‘appening over ‘ome” was written in such a way that one local educator wrote an impassioned plea to the Gazette to put a halt to Harry Evans’ weekly assault on the written english language.

The column and columnist were hilarious or notorious, depending on your view point.

Jack Evans’ effort offers highlights and snippets of the columns and details the special relationship the two shared behind the scenes during the columnist’s salad days when his musings about Mort the Bull or the politics of the day were the most popular parts of this newspaper.

“There’s one point where under the right circumstances, he could have been marketed as a circulated columnist. He never pushed for it and probably never thought of it but people really responded to him. The readers who loved him really loved him and the others, well, they really didn’t like the way he presented his thoughts in the Gazette every week,” Jack Evans told the Gazette.

“I don’t know why The Gazette runs such a terrible column.The man is ignorant, he probably doesn’t even write his own stuff,” the man complained.

The Gazette staffer pointed to the interest from the Globe and Mail, the Canadian Press and the Toronto Star as well as the radio station CFRB that typically read his columns over the Toronto airwaves and that the local people who complained could hardly come close to achieving such lofty levels.

As a testament to his writings, Harry Evans’ columns still hold a place in longtime readers hearts and his name usually invokes a warm smile and perhaps some bemusement of how this native Englishman with no worldly knowledge would come to Picton as a Royal Air Force airman, train at Number 31 Bombing and Gunnery School during World War II and return to the County after the war to marry a local lass.

Harry Evans would wind up starting a dairy farm with virtually no agriculture experience what-so-ever and then, with limited schooling and no literacy skills to speak of, become a valued voice in this community’s paper of record up until his death in 1988.

The book is broken down into chapters that encapsulate the best of the Harry Says columns which were all based on Harry Evans’ experiences.

The time he wrote a column in full detail about being tracked down by Picton police and thrown in jail for denting a car fender while driving home to Athol township.

The life and times of his prize bull Mortimer.

Snippets of fan mail from readers from Dartmouth, NS to San Francisco, CA.

His successful political campaign for a seat on Athol Town Council which involved championing a flush toilet for the Cherry Valley Town Hall.

And, of course, the time the Gazette publisher of the day Lindley Calnan had Harry Evans temporarily fired for the way he enthusiastically described Mortimer’s prowess with the heifers that spring.

Jack Evans utilized scrapbooks compiled by one of Harry Evans’ neighbours that contained a lions share of Harry Says clippings and letters over the years and that scrapbook will be donated to the Prince Edward County Archives at the Wellington Library.

Harry and Me is available locally at Books and Company on Main St. In Picton and Jack Evans will be at the store on Sat., Dec. 22 from 1-3 p.m. To sign books and talk to local readers that can still remember when an elementary school dropout and dairy farmer crafted must-read pieces for the Picton Gazette for the better part of three decades.