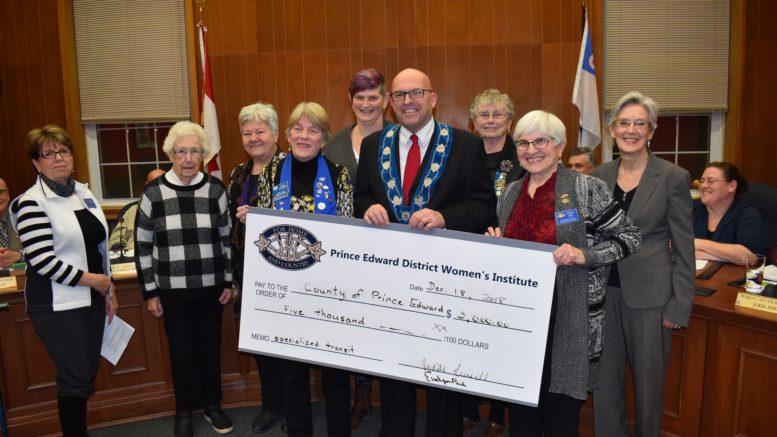 The local WI group was at Shire Hall on Tuesday evening to present a cheque for $5,000 to the municipality to help offset the cost of accessible transportation for local residents.

The funds come from proceeds of the annual WI Arts and Crafts Show and Sale held annually in Picton on the last Thursday of July.

President Evelyn Peck told the Gazette that accessible transportation for all County residents who need such a service is near and dear to the hearts of the WI membership.

“We realize it makes a profound difference in the lives of people who rely on the service and they certainly appreciate it so that inspires us to continue with out efforts to support accessible transportation in Prince Edward County,” Peck said.

The popular craft show draws upwards of 5,000 buyers and vendors from many corners of Ontario every single year.

Since 1989, the Women’s Institute has identified the need and advocated for continued accessible transportation in this rural locale.

Tuesday’s donation marked a decade of monetary support for public transportation by the service club and, since 2008, a total of $115,000 has been contributed.

“That’s an incredible amount of money and we are most grateful,” Ferguson said.

Ferguson said that a new era of broader public engagement where groups and individuals step up and make contributions to the betterment of Prince Edward County is dawning.

Since 1989, the WI has worked tirelessly, lobbying branches of government and consulting surrounding jurisdictions as to ideas for public transportation in rural municipalities.

Despite various road blocks and through many ups and downs, Ferguson noted the group persevered and stayed the course.

Finally, in 2007, The Prince Edward District realized a dream and were able to help bring accessible public transportation in Prince Edward County.

Currently, the service is provided to the municipality by Quinte Access.

“It’s truly a remarkable accomplishment, one that stands as a shining example for other in our community,” Ferguson added.