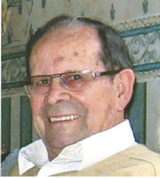 George William Wright
It is with great sadness that the family of George Wright announces his passing on Wednesday December 19th, 2018.. Loving husband for 70 years of Kathleen, (deceased). Beloved father of Eileen Whittle and her husband Mike of Oakville, Lynda Simpson and her husband Jim of Port Dover, Edward Wright of Picton, Marilyn Nasadyk of Kamloops, B.C., Shirley Hardy and her husband Mick of England. Predeceased by his sister Lillian Dulmage and survived by his sister Maizie Barsley of Picton. He leaves behind many loving grandchildren, greatgrandchildren, great-great grandchildren and nieces and nephews. George lived a full, vibrant life over his 98 years and in his words “had no reason to complain” The road that he travelled began with his birth to Lillian and Charles Wright in Belleville on September 11, 1920. He was raised in the County and spent his early years helping both his parents and his grandparents with farm life. At the age of 19, when war broke out, he joined the fight overseas with the Hastings and Prince Edward Regiment. In December of 1942 George volunteered and started training for the Can/US First Special Service Force (aka Devil’s Brigade). After the completion of extremely vigorous training he was involved in many missions, most notable being Mt. Difensa and Anzio Beach battles in Italy. It was overseas in England that he met, and married Kathleen Hawkins, his wife for 70 years, before her passing in August, 2015. After the war he was employed by the Bata Shoe Company of Picton where he worked on the production line learning every position until he was made the quality checker for the plant. Ten years later he applied to the Town of Picton and in May,1955 joined the Picton Police Force where he eventually became Detective Sergeant. He served on the Police Force for 25 years, retiring in 1980. His life, his love and everything that made him so special to us will live on through our memories. He has touched the hearts of so many throughout his life and will be greatly and sadly missed. Thank you to all that have helped us through this very difficult time. We wish to thank the staff at McFarland Memorial Home for their excellent and compassionate care. Also we send a special thank you to the many staff members at Publow House who watched out for him and loved him as much as we did. According to our Dad’s wishes, he has been cremated. A memorial service will be held at St. Mary Magdalene Anglican Church at 2:00 PM on Saturday, January 12. A reception will follow to celebrate his life, love and friendship. If desired, memorial donations to St. Mary Magdalene Church, Picton would be appreciated by the family. Cremation arrangements entrusted to Whattam Funeral Home, 33 Main Street, Picton, ON www.whattamfuneralhome.com