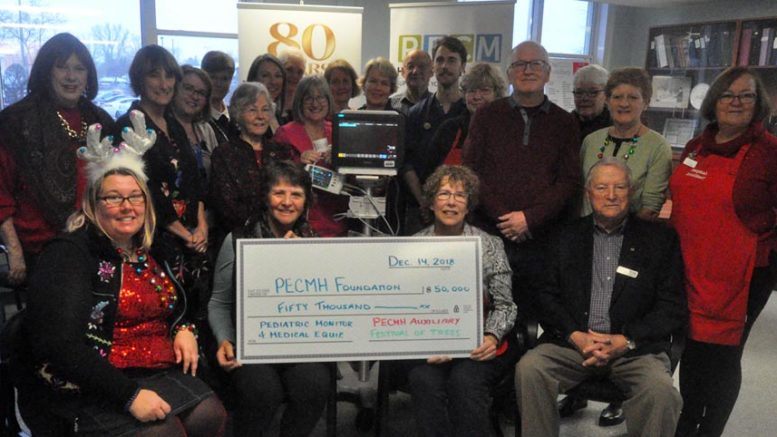 The Prince Edward County Memorial Hospital Auxiliary celebrated a record gift from its annual Festival of Trees Friday as it offered the hospital a $50,000 gift for medical equipment.

The holiday event greatly surpassed its goal of raising $22,668 to secure a pediatric monitor for use in the emergency room. Jane Davis, a registered nurse in the department, showed off the monitor that morning before physicians, nurses, auxiliary and hospital foundation members and media.

Davis explained the Philips brand monitor could record vitals like temperature, plus, and electrocardiography. She also said there’s a portable element to the monitor that detaches from the base and allows the monitoring to continue when a child goes for an X-ray or other tests.

“In the past, we’d have to take the whole monitor with the children,” she said.

Davis also told the assembly the monitor has a reputation for being very accurate and it also is able to be sued for adult patients as it is almost an exact duplicate of the adult monitors in place.

Auxiliary president Pat Evans said the Festival of Trees is always a big event and she offered credit to Jack and Cathy Starkey who annually lead a large group of volunteers that improves, innovates, and makes the event “just a little bit better than it was before.”

She said presenting the 25-year-old festival, currently hosted by Isaiah Tubbs Resort, for the past 11 years has really been a team effort for the auxiliary.

“We raise approximately $50,000 from this one event, which is outstanding. One of the things the auxiliary is proudest of its the committee doesn’t just do the event itself. They rally the whole community,” she said. “We have so many volunteers who only come out once a year. They come out and they just bake for us, just sell tickets on the bucket draw, or do a bit of security.”

The Festival of Trees also rallies the entire community to donate trees. Evans spoke of a 10-year-old boy named Lucias, who donated a tree last year made Pokemon and Lego pieces that made about $200. While she said he was a little disappointed he didn’t match that success with his Peanuts-themed tree this year, he’s eager to experience the good feeling of donating again. For 2019, he’s thinking about creating a Scooby Doo tree. He’s just one example of the excitement surrounding the activity.

While accepting the donation, Prince Edward County Memorial Hospital Foundation president Monica Alyea said she bought two trees this year and has been a regular shopper in the Second Time Around Christmas boutique. She commented on the social aspect of Festival of Trees and how, even in miserable weather, it can brighten spirits and put people in the mood for the season.

The Prince Edward County Memorial Hospital Auxiliary is one of just two donors recognized at the Humanitarian level on the foundation’s donor wall, signifying those whose recorded donations to the foundation have exceeded $1 million, and it continues to lead most campaigns.

“The foundation is nothing without the auxiliary,” Alyea said. “You guys are absolutely, I think, the largest volunteer organization in the county and you must do something to keep your volunteers wanting to volunteer.”

The president described the $50,000 gift as “huge” and said the monitor will be in demand as there’s a fair number of young children in the county and a number of visitors who also have children.

Alyea said she looks forward to continuing the positive relationship with the auxiliary as the county embarks on a new hospital build. Already, it has been a leading advocate for the Back The Build campaign.

The additional money raised at Festival of Trees will also be spent on priority medical equipment to be used in the current hospital. Replacement scopes, ventilators, a transport monitor, an ultrasound stretcher, and infusion pumps were among this year’s requests.

The foundation is also in the midst of its Christmas appeal for community donations. Those interested in donating can visit www.pecmhf.ca, call 613-476-1008 ext. 4503, or visit the foundation’s office at the hospital.