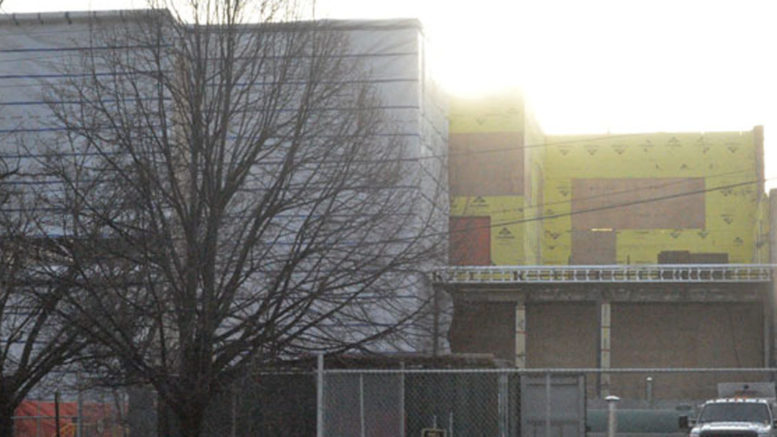 Moving forward - With structural work complete, the roof will soon go on the Royal Hotel and crews will be working on interior electrical and plumbing systems. (Adam Bramburger/Gazette staff)

The structural portion of the restoration of the historic Royal Hotel is now complete.

Sol Korngold, the project manager for the beleaguered development reported Tuesday that “things are moving well” and said he couldn’t be happier with the progress crews have made to advance work on the Main Street landmark, originally built in 1879.

While owner Greg Sorbara — Korngold’s father-in-law — once projected the transformative project to be completed late last year, the development hit a snag in April 2017 when the foundation beneath the building’s east wall shifted. Korngold said that had been a real setback.

“That east wall really set us back, it set us back way more than a year, if not a year-and-a-half. The brick is still not up on the east wall. It’s winter and we’re going to have to heat that corridor to get the brick up, which we’re going to do. That’s the work from the outside that you’ll see.”

Taking an engineer’s recommendation, the family elected to have helical piles placed under each wall of the building. Korngold explained the process was like taking a massive drill bit and anchoring each piece of the structure into the bedrock 12-15 feet below grade. That work was done and the structure of the boutique inn was built up from there.

“She ain’t going anywhere. It’s work we had to do that wasn’t envisioned in the original scope for the structure. It had to be done. Unfortunately, the building was built mostly on essentially said, as much of Main Street is. There’s a lot going on under the ground,” he said. “But that’s old history now. The building is as sturdy as it possibly can be and we’ve made a lot of progress since then.”

Korngold said, essentially the structure has been completed. All this feel work has been done, along with mechanical and structural work. Brick is going up and masonry work continues. The roof is on track to be finished by the end of January. Decks for each floor were poured and are solid. The window openings were created in the walls and installation is expected by spring.

Over the colder months, crews will work on interior elements.

“This winter, the building is sheathed and fully enclosed. We’ll be completing the roof and on top of it the mechanical and HVAC systems. Inside the building, we’ll run the electrical from the basement and connect with all the civil services and clean water as well. There will be a lot of base building. You’ll see a lot of progress inside in delineating rooms, putting stud walls up and finishing the electrical and plumbing.”

Korngold said he’s loathe to set an opening date, but he’s hopeful for mid-2020. If things happen more quickly, it will be a pleasant surprise. He also added his family has not wavered in its resolve.

“What a lot of people don’t realize is that restoration is always going to take significantly longer than building new. There are surprises. You need heritage approvals and it’s meticulous work,” he said. “It’s definitely a passion project for us, for our family. We’ve been in the county now for about 15 years. We have a farm up on Northport Road. We’re not going anywhere. This is something we’ve dug our heels in on and we want to build something that folks in the county can be proud of.”

He indicated the family knows there will be people staying at the hotel and enjoying the bounty of the community, but they’re also interested in recreating a cultural hub and becoming a strong employer that will boost the local economy.

On that end, Korngold said it’s also important to note the project at this point is more than just construction.

“We’re moving ahead and there’s the entire operation of the hotel we have to be ready for as well. That’s happening behind the scenes. We’re looking into operations, web presents, payment systems and so many different components. We’ll have a spa in the basement, two different restaurant spaces, and the large backyard is going to have a pool and a bar. There’s so many components to be ready for.”

The family is working with a local firm to recruit a hotel manager who has experience with openings. Already, Albert Ponzo has been named executive chef of the food operations. Korngold said he’s fully ensconced in local life and in addition to teaching culinary arts Loyalist College, he’ll be working with employment agencies to train local talent. The family has also firmly committed to creating a farm-to-table feel. They’re working with local growers and beverage producers, while expanding their own organic garden and developing an organic-fed beef herd of 60-70 Angus cows.

Most recently, passersby may have also noticed the historic hotel isn’t the only building undergoing change on the block. The family has demolished 6 Ross Street, the former McFarland Law building that served as a recent home of The Headland, a new media incubator that partnered Loyalist College with 3D film production. Originally, it was a stable building for The Royal. Korngold said when the chance arose to buy it, the family was intrigued because of its proximity to the hotel, its parking spaces, and the ability to provide an additional point of access. He said that rebuilt structure will be reminiscent of the past building.

“It will look very similar to the one that was. The building will have two floors as it did before. The second floor will have five guest suites — taking us from 28 in the hotel to a total of 33 rooms. The rooms at 6 Ross will be slightly different. They’ll have kitchenettes.”

Korngold said the main floor of 6 Ross will have three dedicated spaces. Fronting Ross Street will be a retail zone of about 1,000 square feet, designed to host pop-up shops, gallery showings, and other activities supporting the brand his family envisions. The next 1,000 square feet will be office space for the hotel as there wasn’t space in the main building to accommodate offices with the services envisioned. The back third of the building will be a storage space for furnitures and supplies as well as a delivery area. He’s hopeful the building will add to the project.

“It’s going to be gorgeous. There’s an interesting juxtaposition between the style there and the hotel. It’s an interesting architectural piece and something I really hope locals can be proud of.”